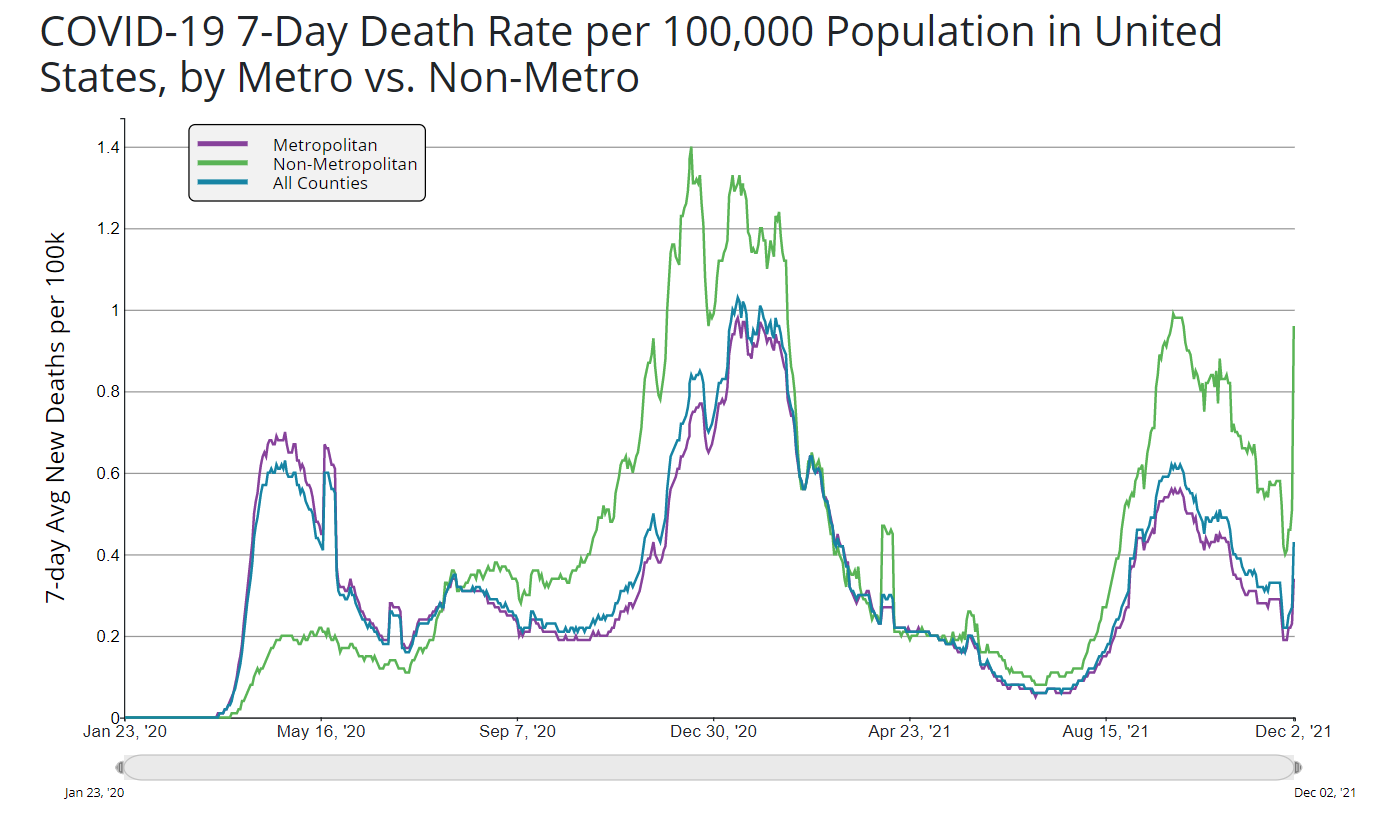 If you drive outside of large population centers where people are by and large still masking up and drive into rural areas you not only see most people not wearing masks but many of them unvaccinated.

Some have argued that people in rural areas are relatively safe from COVID due to lower population densities, and while that was in fact true during the first wave of COVID back in March to May of 2020, that has not been true since.

As the graphic shows, since the summer of 2020, there has been a large gap between the death rate in rural areas versus metro areas.  That gap tends to shrink when the waves subside and growth huge as the another wave hits and as vaccination rates have increased since last winter, that gap has only increased.

Right now, cumulative deaths per capita are 28 percent higher in Rural vs. Urban America.  Rural deaths have been outpacing urban ones for more than a year.

A Washington Post analysis this weekend found that in areas that are tightly packed and COVID has the potential to spread more easily are actually the areas that are doing the best right now – the reason,

“Death rates are far below the national average in the most-vaccinated, often-urban areas,” the Post reports.

There is also a red-blue divide here.

The Washington Post’s Philip Bump reported last week that deaths in red counties are more than 50 percent higher than in blue counties.

But the Post analysis adds, “even that might undersell just how beneficial vaccination is in preventing the worst that the coronavirus has to offer — particularly when adopted on a grand scale in a given area.”

The Post analysis notes that many have focused on the notion of “herd immunity” which some believe to be 70 percent or above, but point out, “That concept has proven elusive, particularly as the delta variant has rendered the vaccines less effective at preventing the spread — while still extremely effective at preventing hospitalizations and deaths.”

Nevertheless, those metrics are perhaps more important than they initial appear.  What the Post found is that “in the densely populated areas in which we’ve approached overwhelming adoption of the vaccines, the death rates are often a fraction of the national average — a significantly greater gap than between the most-vaccinated and least-vaccinated states.”

This is probably going to become far more rather than less important as the Omicron variant hits.

First of all, the failure for us to get the population vaccinated is part of what led to Omicron variant in the first place.  It is a reminder that what happens halfway across the world can get to us in a matter of days.  And so if we don’t make sure that not only our nation, but the world is vaccinated, then we will remain at risk for variants that can increasingly elude current immunity.

The evidence emerging so far is that vaccination may not prevent people from getting infections altogether, it has reduced the severity of the illness.

Dane County, Wisconsin is a good example, home of Madison and University of Wisconsin.  It has one of the highest vaccination rates in the country at 86 percent of people 12 and older being fully vaccinated.

Dane County has had 0.4 daily deaths per million despite being in one of the hardest hit regions.

New York City has around 80 percent vaccination rate and has registered a per-capita death rate of about one-third the national average.  Remember it was New York that got blown up by the initial wave of COVID, since then they have been a basic model for how to handle the disease.

Some argued that the lessons learned in dense New York should not apply to the rest of the world – the data shows that they were wrong.

The Post analysis concludes: “while the most-vaccinated states are significantly, incontrovertibly and increasingly better off than the less-vaccinated states, the difference is even starker at the county and city level — and even as many of these highly vaccinated counties also happen to be the most densely populated.”

13 thoughts on “Monday Morning Thoughts: This Graphic Tells the Story of COVID”