Davis, CA – When former County Supervisor Matt Rexroad threatened to sue the city of Davis, probably on behalf of his client, the Davis College Republicans, forcing the city to go to district elections, I was one of the few who looked at the prospect favorably.  I have since changed my mind and see that the downsides far outweigh the benefits.

If you want ensure that people of color do not get elected in a city like Davis, create a series of single-member, winner-takes-all-districts where the minority population never exceeds forty percent.  Unlike cities like Woodland and West Sacramento, Davis is relatively homogenous, with communities of color distributed relatively evenly throughout.  There are not enclaves like you see in other communities.

Under the previous system, the voters would get to select their top two or three choices.  In a big field, someone could win with a relatively low percentage of the total vote.  Now the only way to get on the council is to finish first in your district.  That’s not conducive to people of color winning in a city where the majorities of voters in the districts are white.

In short, what worked well in Woodland to get people of color on their council does not work in Davis.

What options do we have at this point?  Well, the city could still challenge in court whether it has to go to district elections and it could present the notion that it makes it less, not more likely, to elect people of color.  It could also opt for choice voting as a means to get away from a single-member, winner-takes-all mentality.

In the meantime, the redistricting process in an exercise in absurdity. 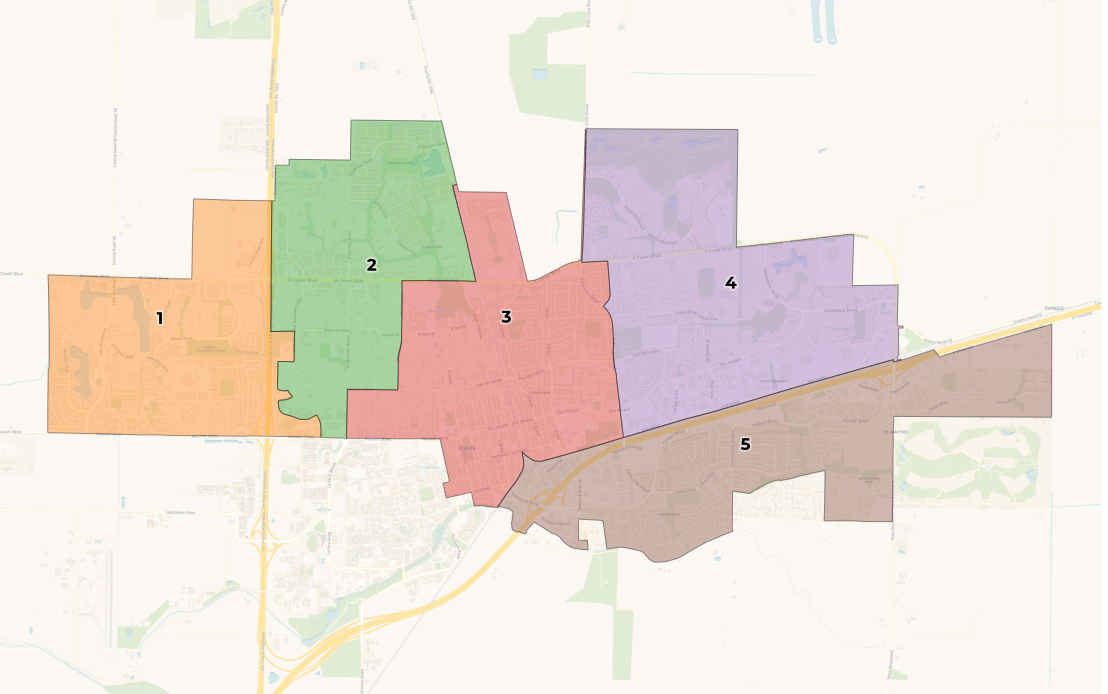 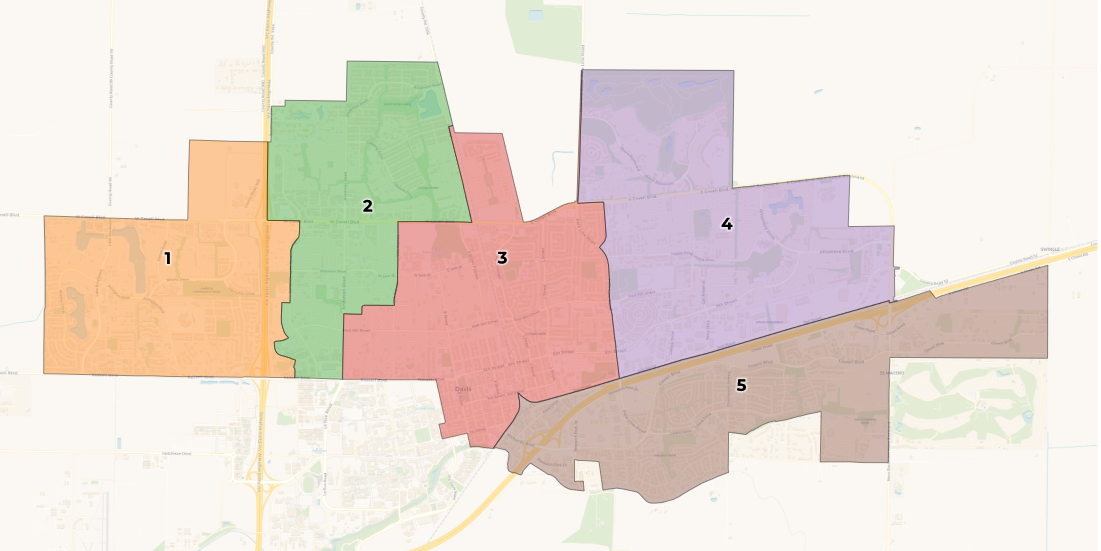 Meet the new maps… same as the old maps.

Okay, close but not quite.  Not only are the two maps remarkably similar though not identical to the final 2020 district maps, they are even more closely resembling themselves.

This might be wickedly funny, except of course for the fact that we actually paid money (really twice) for the demographics people to help draw these lines.  And then we are filling up staff and public time to get input.

The two new maps are even more closely resembling each other than they do the 2020 map.  But most of the maps are the same.  It is interesting that they went for the same basic configuration as 2020.  That means there is basically one district in South Davis.  The only difference is how far it extends to the west into the core area just north of I-80.

One is slightly different, as it extends more to the east than previously, with only slight variations.

Unless there is a weird cut or some awkward boundary, the two maps are not going to generate much attention from the public.

But, hey, we have to have a public process to determine that the new maps are the same as the old maps and not likely to change much in town and certainly no more likely than before to generate people of color—not that that’s probably that foremost in the council’s mind at this point.

Other than that, this is largely a status quo map, not likely to shake up the make-up of the council.  You would think if we were paying for this, the council could at least give us some different looks—it’s not like there are none.  We had some very different configurations last time, including parts of two districts in South Davis.

19 thoughts on “Commentary: While We’re at It – Let’s Make It Absurd”