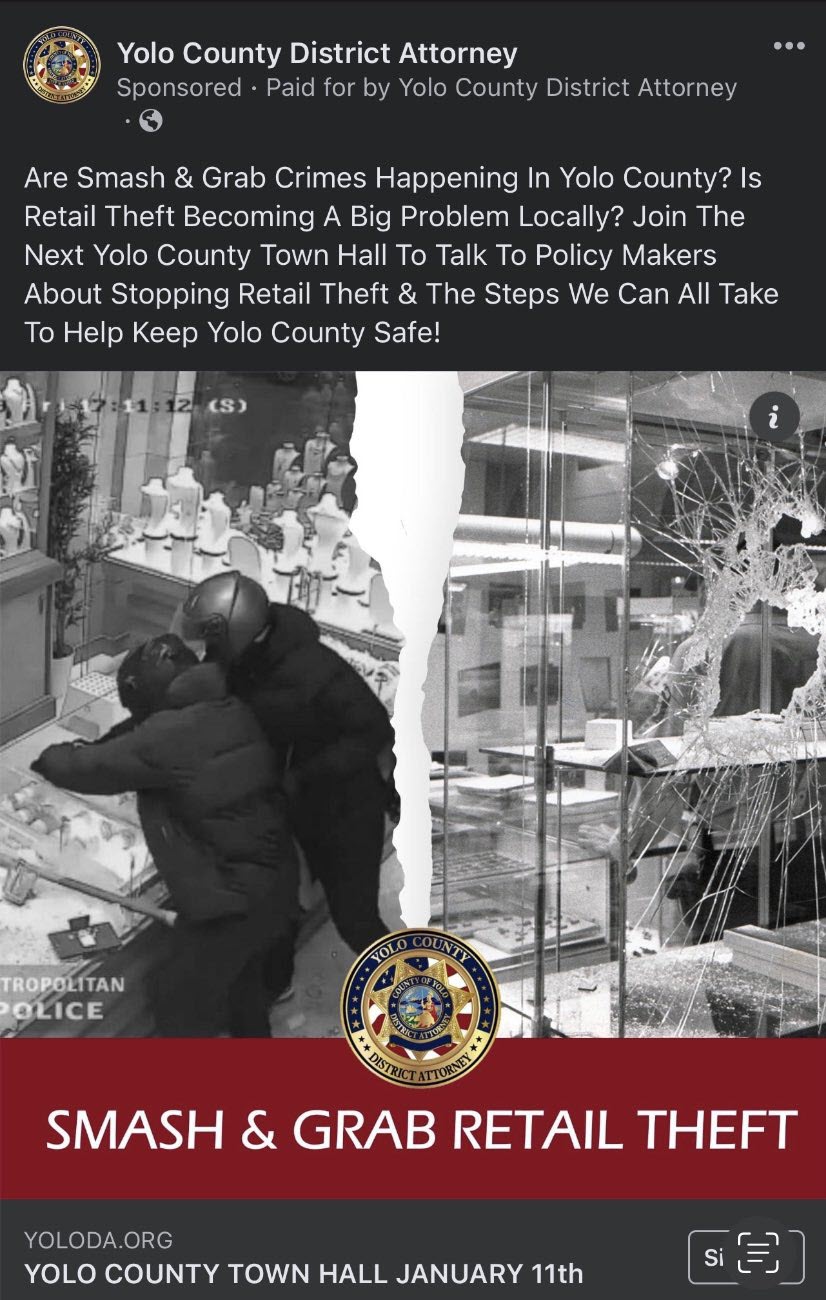 Woodland, CA – The rise in murders in the US has been alarming over the course of the pandemic, but it is interesting that the issue that seems to have the most juice for pushing back against criminal justice reform has been retail theft.

In recent weeks, the Yolo DA, Jeff Reisig, has attempted to thread an interesting needle—pushing for reform while at the same time pushing back against reforms like Prop. 47 or early release.

His latest push: cracking down on retail theft.

Next week, the Yolo DA will be holding a town hall on smash and grab retail theft.

That’s been the wave of media and DA focus for the last few months.

The DA in his blurb asks: “Are smash and grab crimes happening in Yolo County?  Is retail theft becoming a big problem locally?  Join the next Yolo County Town Hall to talk to policy makers about stopping retail theft and the steps we can all take to help keep Yolo County safe!”

My favorite part though is the image…  you see this great imagery of two people in black attire smashing into a high-end jewelry store.  But then at the bottom of the image, you see the watermark—Metropolitan Police.  There are no metropolitan police in Yolo County—so the DA had to illustrate the problem of smash and grab in Yolo County by augmenting it with imagery from elsewhere.

Back in November, Yolo County put out a press release on the issue, noting, “While Yolo County has not yet experienced similar crimes, law enforcement remains prepared to respond in the event our community experiences such crime…”

A few days later, of course Yolo County was hit by such incidents.

But, as we pointed out, some of it was a little thin.

On December 9, in Yolo County two teens hit three stores in Woodland and Davis.  This has been portrayed as yet another organized theft—but let’s look at it a bit more closely.

The two are charged with four felonies, one for “organized retail theft”—two or more occasions with value exceeding $950.

Under that law, Adams and Thompson acted “in concert with one or more persons to steal merchandise from one or more merchant’s premises… within a 12 month period…”

In short, two people committed thefts in more than one place together and the merchandise was valued at more than $950.

But it gets thinner—they are also charged with three felony conspiracies to commit a misdemeanor.

Count 4 for example says that they “did commit a FELONY” with “Conspiracy to a commit a misdemeanor.”

Conspiracy of course is a scary word, as organized retail theft has become.  But here, the conspiracy was: (1) drove to the CVS in Davis together, (2) entered the store each carrying an empty bag; (3) filled the bag with approximately $366 of merchandise and left the store without paying.

As we pointed out at the time, this was not much of a conspiracy or an organized effort.

But as we have seen a number of high-profile incidents since Thanksgiving, we are starting to see a push to reverse Prop. 47.

In 2020, efforts to overturn Prop. 47 were soundly defeated by the voters who overwhelmingly rejected Prop. 20

But times have changed, and Democratic Assemblymember Rudy Salas of Bakersfield has now introduced AB 1603, “which will give California voters another opportunity to take a stand against the increase in theft afflicting the state. In 2014, voters passed Proposition 47 (Prop 47), which lowered the crimes of certain thefts and receiving stolen property to misdemeanors when the value of the stolen goods was less than $950.”

According to Salas, “Since its passage, California has experienced a brazen increase in widespread theft, including “smash-and-grab” robberies, which have terrorized cities throughout the state.

“Enough is enough, we need to fight back against the criminals who are stealing from our communities,” said Assemblymember Salas. “We have seen the unintended consequences of Prop 47’s weakening of our theft laws and I believe California voters are ready to make their voices heard on this issue again. AB 1603 provides that opportunity and will allow us to take a stand against the theft and criminal gangs who are plaguing our state.”

Opponents of Prop. 47 point out that it “more than doubled the amount a suspect can steal before facing a felony from $450 to $950.”

But the data is not necessarily on their side.

An editorial last week by the LA Times pointed out that blaming crime on Prop. 47 is not supported by the facts.

For one thing they note that California’s felony line is not absurdly high, having raised it from $450 (which was among the lowest in the country) to $950.

“Some of the most conservative, tough-on-crime states had higher dividing lines than California even before Proposition 47 passed. Texas was at $1,500. It has since raised the line to $2,500, matching South Carolina. Most states are now at $1,000 or more, so even at $950, California’s threshold is now among the toughest third of states,” they write.

Moreover, it is not even clear from the data that there really has been an increase in retail crime.

More clear, perhaps, is murders which had gone down for two decades have risen sharply in the last few years.  But even there, it is hard to pin the increase to specific policies.

The Washington Examiner, a conservative publication, on January 1, argued, “Liberal prosecutors across the country have overseen significant crime waves in America’s major cities this year — and have largely stood by their aggressive reforms.”  They added that “few have acknowledged the seeming link between their departure from the prosecutorial status quo and the rise in violence.”

Moreover, a number of cities saw large drops in homicides in in 2021.

Several of those cities have progressive prosecutors as well.

But that’s not stopping elected officials facing reelection this year from exploiting them as much as they can.