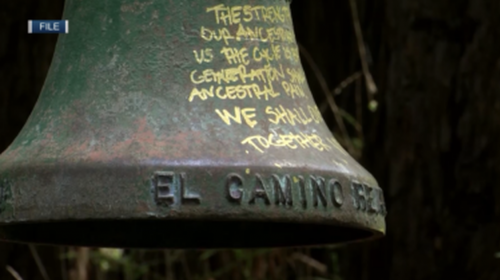 What do missionary bells represent in our history? “The California missions began in the late 18th century” according to History.com, “as an effort to convert Native Americans to Catholicism and expand European territory.”

Missions were developed to erase Native American culture and force Native Americans to conform to the rule of the Europeans. KION 5/46 news explained that the missions enslaved thousands of indigenous people, treated them brutally and caused the death of 150,000 people. The bells of the mission became a symbol of native trauma.

In my opinion, due to our grave history associated with the missionary bells and the treatment of indigenous people, additional missionary bells should not be established and we should work for the removal of the bells already in place.

Gilroy, California announced that a new replica mission bell would be erected this month despite opposition. According to abc7, the Gilroy City Council approved the bell as a gift to the city in September 2020 for its 150th anniversary commemorating the El Camino Real route. Last week, many people spoke at a Gilroy City Council meeting expressing their outrage over the bell. During this meeting, it was put to a vote whether the installment of the missionary bell would be put back on the agenda and able to be revisited, but the motion was rejected four (including the mayor) to three.

In addition to the horrible history associated with mission bells, this particular bell is a replica, and holds “no historical value, and is actually being manufactured.” There should be no deliberation, the bell should not be put up.

From my experience, mission bells will not be missed. I do not know anyone who would pass by a bell and admire the history it symbolizes. Especially if the bell is placed on “busy Monterey street” as stated in this by abc7 news, nobody is going to stop to look. The bell brings nothing but harm to the community. It proves that indigenous voices are being continually silenced and as Lopez states, “the City Council obviously doesn’t get it.”

“This is a great example of a gift that doesn’t mean the same to everybody,” Councilmember Hilton said. Missionaries along with their bells have a long history in California, but we need to recognize that there is pain that missionaries caused still being felt in communities today. They are a representation of how terribly indigenous people have been treated and a reminder of our colonial past.

In elementary school, I had a field trip to Mission San Francisco and the guide mentioned that the area that everyone stood on were the graves of many indigenous people. In fact, there weren’t enough graves, so bodies were packed on top of each other. His words remain stark in my memory.

There needs to be more consideration for the different cultures and histories that make up our nation. A bell was already taken down in Santa Cruz in 2019 which sets a precedent for future bells to be removed, as mentioned in this article. We, as a diverse community, should work together to understand Native Americans and their concerns towards the installation of new missionary bells, and aid in the dismantling of older bells.