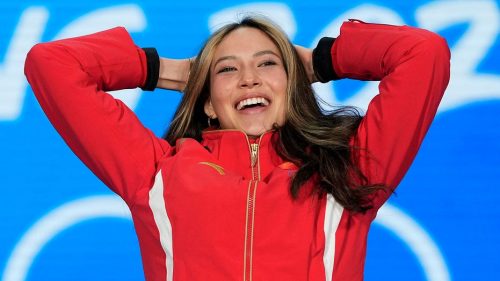 BEIJING – US-born Olympic Skier Eileen Gu won the silver medal in women’s slopestyle at the 2022 Olympics in Beijing on Monday, following up her gold medal in the Big Air event last Tuesday. As she rises to international stardom, many have raised questions about why she is competing for China instead of her native United States.

In the days following her gold medal run, Gu, who also goes by her Chinese name Gu Ailing, received criticism from many Americans about competing for China. Gu’s mother is Chinese, and she spent a significant amount of time in China as a child. However, Gu became a star in the United States. In fact, at age eight, Gu joined the ski team at Northstar, a popular resort in the Lake Tahoe area of California. Gu’s success prompts important considerations of nationalism; what does it mean to be American?

Conceptions of American identity have evolved since our founding. Over the past two and a half centuries, many critical aspects of American identity and personhood were only applied to white males. For over two hundred years, America has had strict and changing definitions of the ethnicities, races, and immigrants that could claim the title ‘American.’ After critical successes in the civil rights era, a consensus formed that American identity should be more inclusive and shouldn’t discriminate based on race, ethnicity, or sexuality. The election of an African American President in 2008 along with a tide shift in LGBQT+ representation in media have been huge stepping stones in the formation of a new American identity. Our current conception of American identity lies in committing to essential values such as equality, justice, and liberty.

To be clear, the United States government has committed many shameful atrocities that have shown a blatant disregard for our core principles– Jim Crow laws, the unjust invasion of Iraq leading to the death of hundreds of thousands of civilians, and the passage of discriminatory immigration statutes are just a few. Patriotic Americans voiced their dissent which led to the reversal of these policies. However, while our past transgressions are shameful and wrong, our

current actions pale in comparison to the brutal repression of Uyghur Muslims in China’s Xinjiang province.

White men can abridge our fundamental values as much as other racial or ethnic groups. For example, southerners’ calls for upholding school segregation and miscegenation laws were fundamentally un-American. In more modern times, the actions of the white supremacist groups storming the United States Capitol on January 6th, 2021 were an assault on our American commitment to the rule of law and free and fair elections.

Nevertheless, that does not mean that a member of a minority group cannot abridge these values as well. Eileen Gu disregards American principles in representing the People’s Republic of China. I presume that Gu knows about the PRC’s oppression of Uighur Muslims, lack of free and fair elections, and its repression of activists in Hong Kong. However, she still decided to compete as a representative of China on the global stage.

Gu has become a media darling in China; she was recently on the cover of the Chinese versions of Vogue, Cosmopolitan, and InStyle. Her unwillingness to acknowledge the extent of China’s transgressions indicates complicity.

Gu acknowledging China’s human rights abuses would be monumental. It would show the Chinese Communist Party that athletes will hold them accountable and take a stand. Gu is in a unique position of influence, and she could be an advocate for real change for the Chinese people. Currently, nearly one million Uyghur Muslims are being forcibly sterilized, being compelled to write “self-criticism essays,” and are not permitted to participate in any of their traditional religious practices. Maybe the Stanford education Gu will begin to receive in the fall will enlighten her on the importance of democracy and change her mind about competing for a brutally repressive authoritarian government that is committing genocide. Until then, I will continue to criticize Gu for competing for the Chinese national team.

I cannot in good conscience give Gu a free pass simply because of her ancestry. Gu is an American, and Americans should hold dear their commitment to American notions of liberty, justice, and equality. If the United States government had detained one million members of an ethnic group in re-education camps, I would be apoplectic and refuse to represent the U.S. in any form. I hold Gu to the same standard.

About the Author: Jack Galloway is a writer for the Vanguard’s Social Justice News Desk. He is from Sacramento, CA, and is currently studying Environmental Economics and Policy at UC Berkeley.

Share:
Tags:Vanguard at Berkeley
Previous : Commentary: Berkeley Leaders Stand Up for Students and the Future
Next : Letter: Racist Incident at C.K. McClatchy

15 thoughts on “Eileen Gu – What Does It Mean to Be an American?”