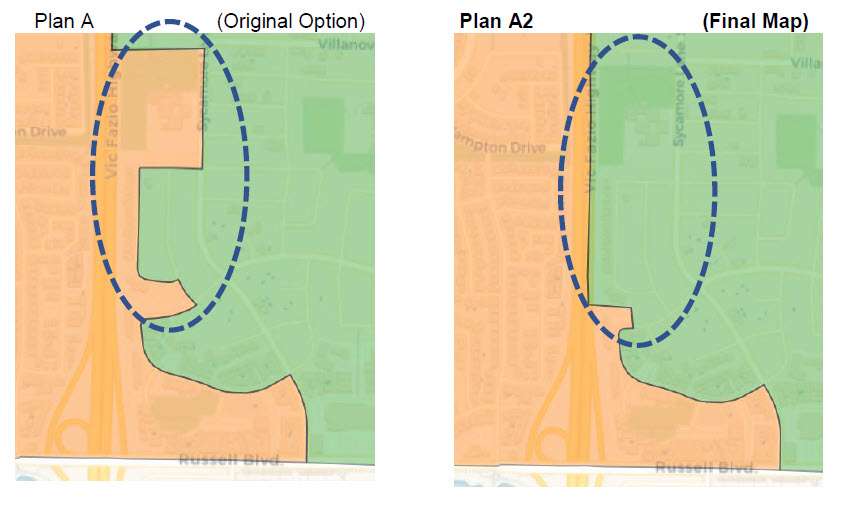 Davis, CA – If a picture is worth one thousand words, perhaps this side by side above is worth, I don’t know, $44,000.  That’s what the council allocated for demographer services for drawing the new maps which look amazingly like the old ones.

In 2019, under threat of lengthy and expensive lawsuit, the city of Davis was forced to

transition from the at-large city council elections to district elections.  But because of the timing, those maps drawn for the 2020 elections lasted one election.  So now the city for the last several months has embarked on a redistricting process that no one cares about.

At the last council meeting, February 1, the council selected a final draft map – but requested some modest adjustments to the map.

According to the staff report, “The changes were intended to allow a portion of a census block to be split in order to keep a neighborhood together in District 2. Specifically, all of Acacia Lane and Cornell Drive, as well a few properties on the north side of West Eighth Street will remain in District 2. Willett Elementary and Sycamore Park will also remain in District 2, although neither parcel has residents.”

“This final map option provides continuity between the current districts, which were newly drawn in 2020, and the new districts,” staff writes.  “It defers a minimum number of individuals (68); accelerates 757 individuals; moves Aggie Village into District 3, which includes the downtown; and incorporates the population in The Cannery, which did not exist at the time of the 2010 census.”

Assuming the council approves the final map, the demographer will then work with the County Elections Office to finalize the district boundaries.  District 1 and 4 – Gloria Partida (4) and Dan Carson (1) will be on the ballot.