Davis, CA – Prior to the vote on Tuesday, Councilmember Dan Carson made a brief presentation to his colleagues, but also to the voters, arguing in part that the DiSC 2022 project would improve roadway conditions on Mace Blvd.

“This is going to pass tonight,” Carson said.  “Why should folks vote for it?  The question is, what’s in it for me?”

He responded to his own question, “The first thing that’s in it for them is that this provides the revenue. We need to help run our city without new taxes.”

Carson explained, “Right now, when you look at our budget financial forecast, we’re in the $6 to 7 million a year range for the next 20 years of the money, we need to be sustainable.

“We’ve got a downtown plan nearing completion that would get us a couple of million or more,” he said.  “This could go a long way to helping us turn the corner and putting us on a fiscally sustainable. It’s almost 4 million plus almost 30 million in construction taxes and infrastructure. That means less pressure in the future for tax hikes and program cuts. And it helps schools and the county and other local agencies.” 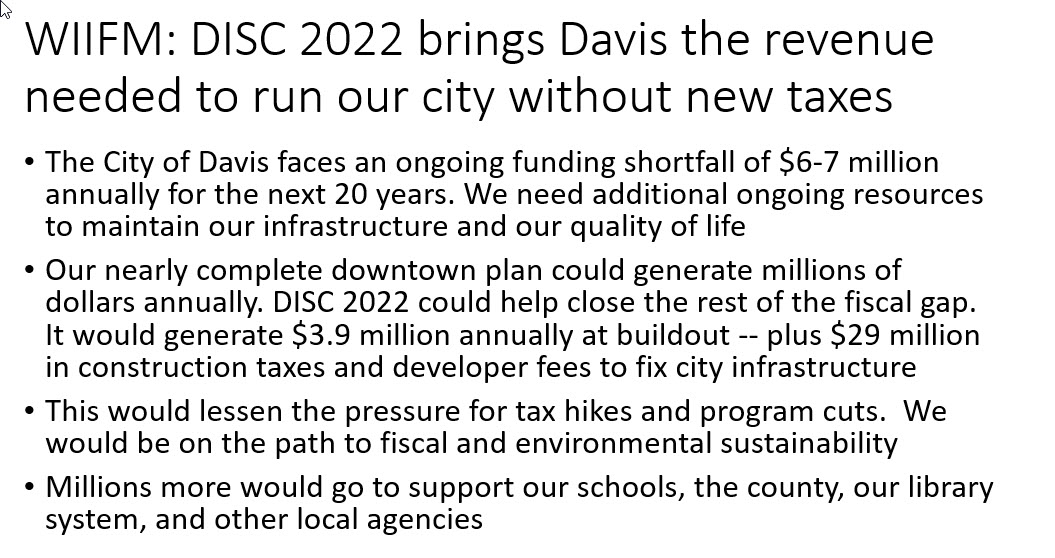 Carson said, “It was said before, and I want to try to make this concrete, this project doesn’t in the long term worsen traffic, it solves the traffic problems. It makes things better. And that’s not my conclusion. That is the conclusion of the transportation experts at Fehr & Peers.”

He said, “There was document released in December referred to as Volume Two Traffic Study that has an amazing amount of detailed information here to sustain this.”

The mitigation calls for additional lanes and signalization.

“They conclude that the total number of intersections operating with an average level of service of F during one or more peak hours, would decrease from nine to zero,” Carson explained. 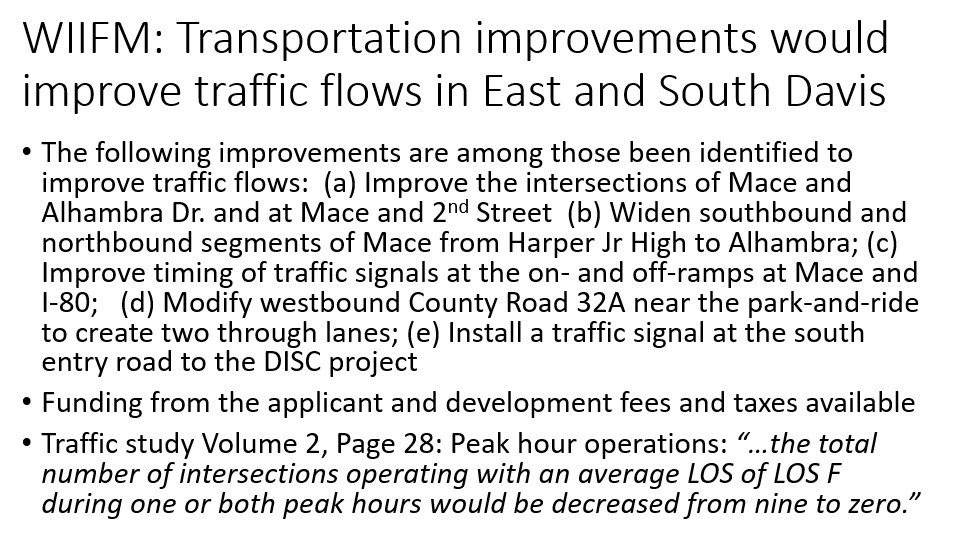 He explained that the above chart refers to the improvements that would make a big positive difference, by improving the level of service and reducing the amount of time delay. 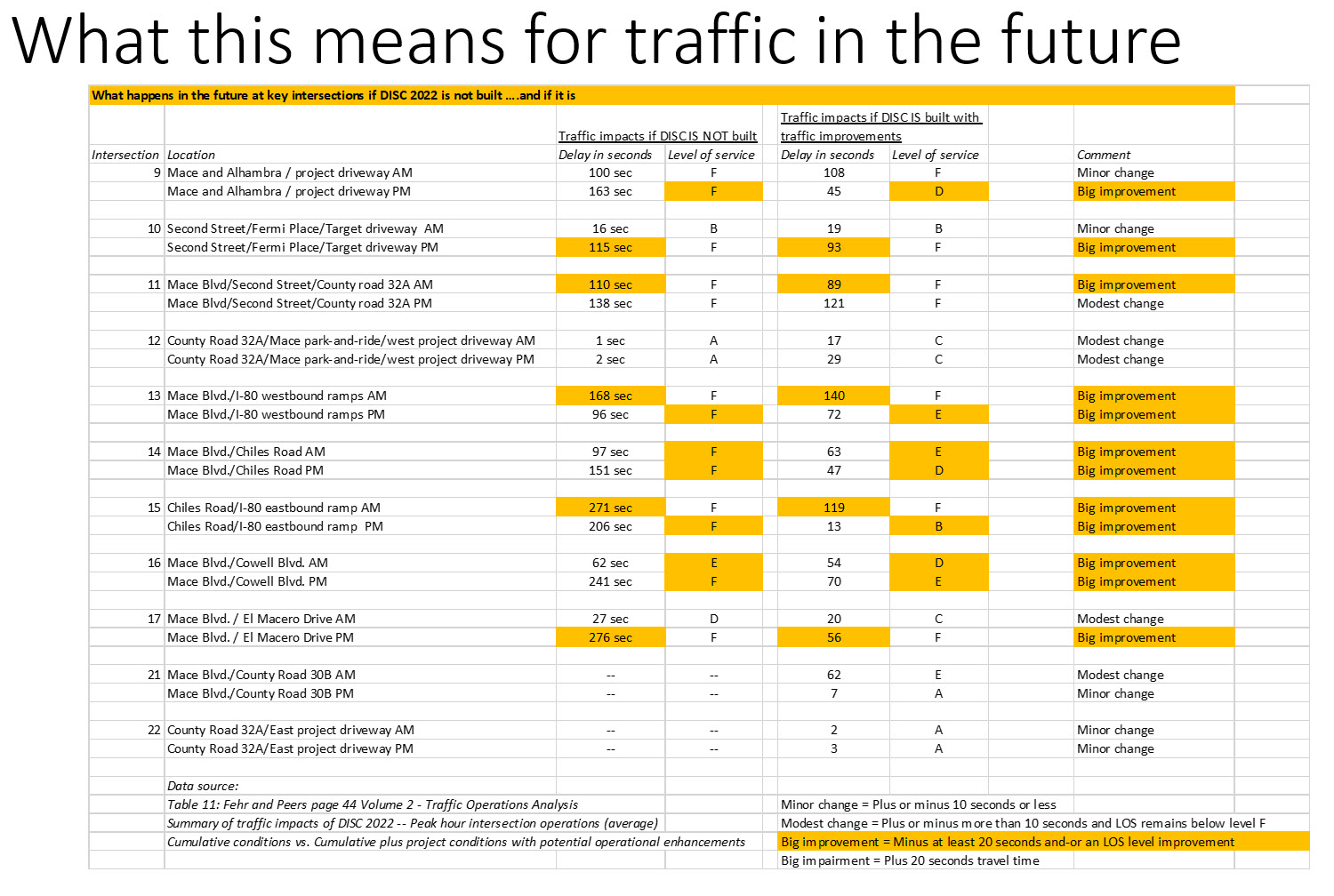 “This slide shows… where, by their estimates, there’s a very significant improvement on intersections on Mace,” he said. 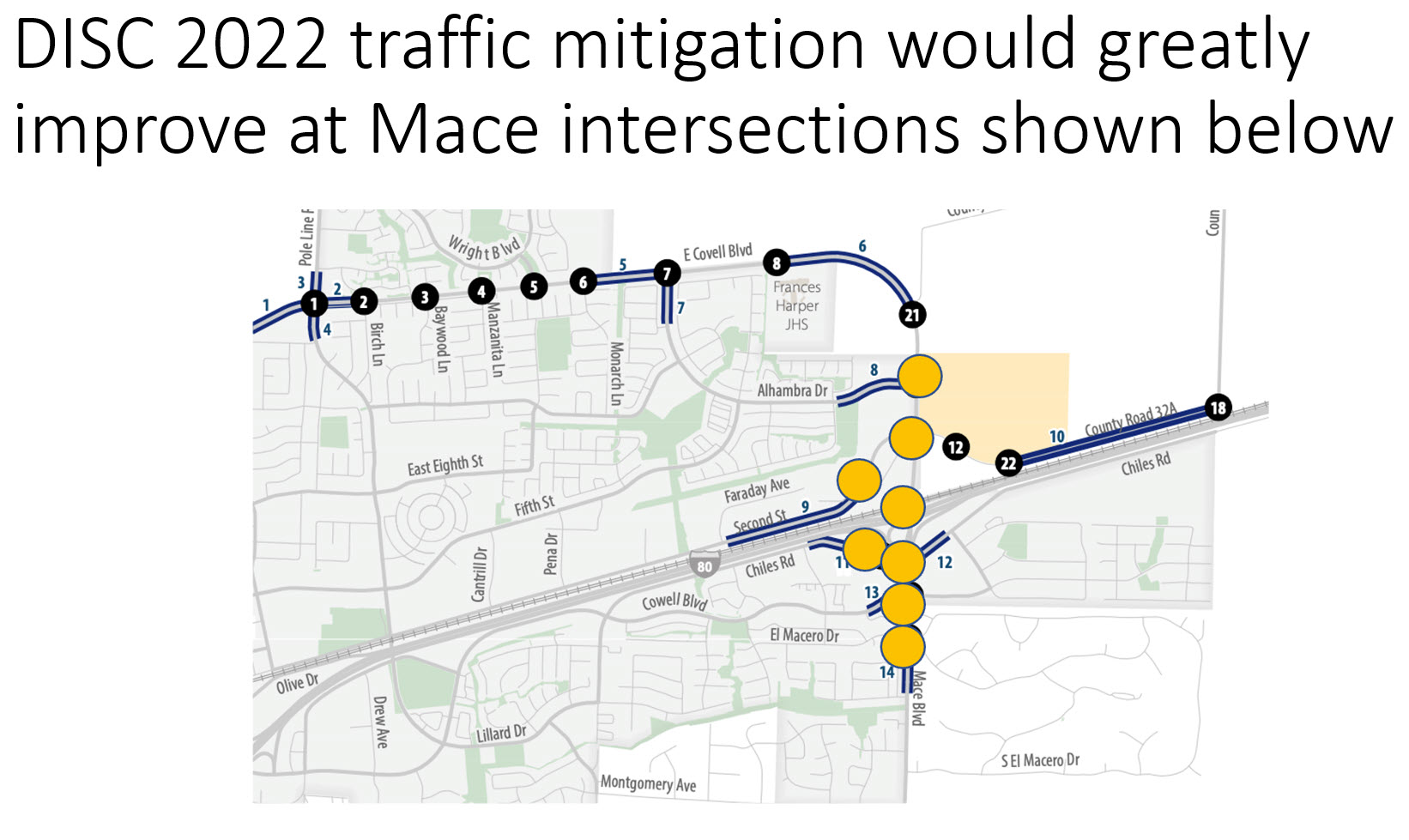 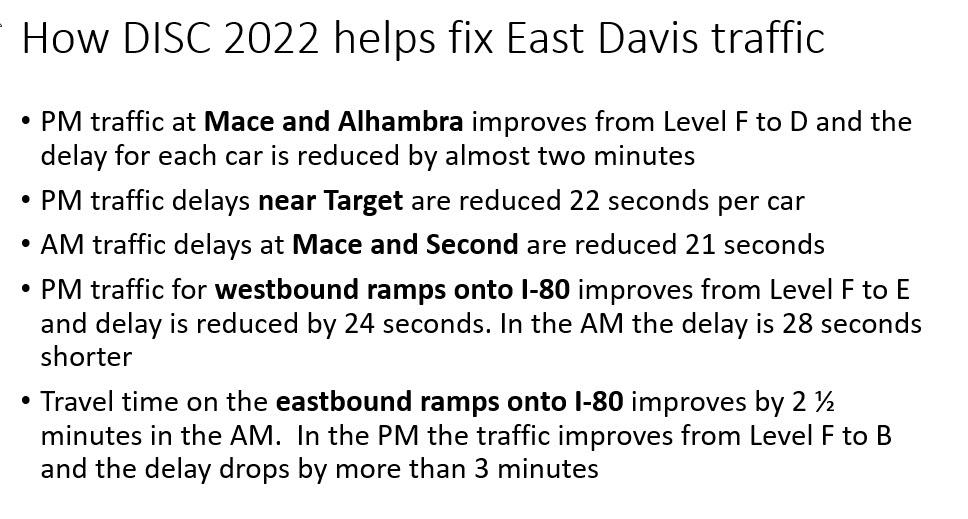 “It also helps things south of I-80, because it is all connected,” he said. “Mace and Chiles you go from LOS F to LOS E, and you have two and a half minutes in the morning.”

He adds, “Mace and Cowell improves.  Mace and El Macero improves…  In the afternoon, you save not quite four minutes of time and delays.” 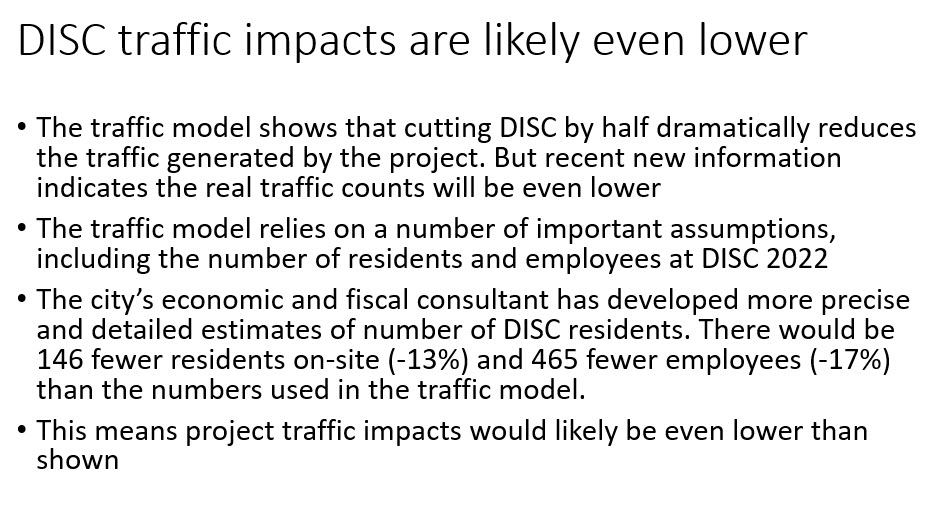 “So even these impacts may be overstated. EPS, our fiscal consultant, did a more detailed analysis of how many people would live on the DiSC site and how many would work there. Their numbers are significantly lower than the population estimates that were built into the traffic model. I’m not an expert. I can’t run the numbers, but I can tell you the implication here is that it’s quite possible that the numbers I showed you aren’t all the good news,” he said. 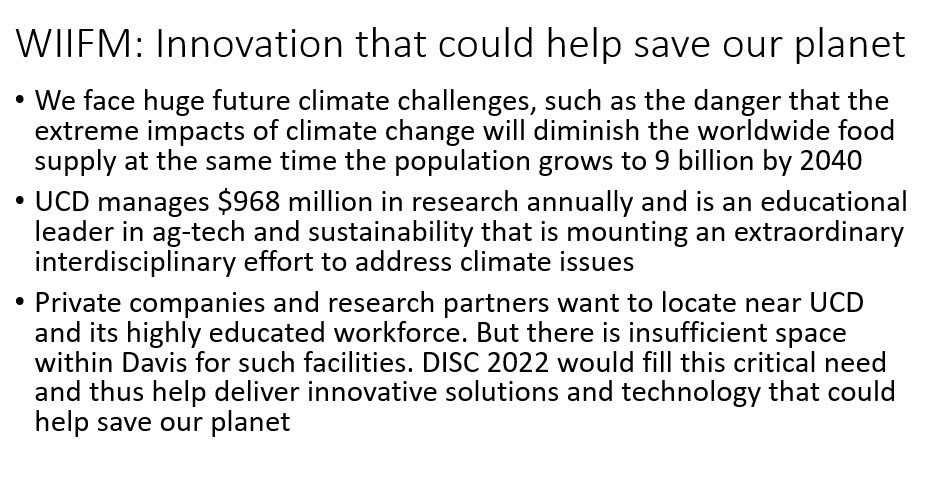 Dan Carson argued that “this innovation center could help save our planet.”

He explained, “Our UC Davis colleagues are now managing $968 million in research. Every year. They’re leading in ag tech and sustainability. They’re going to lead to new basic research, but they’re also going to get us to products and things that will help address climate change and prevent it, but also things that if climate change is going to happen, help us adjust and cope with it.”

He said that are a lot of private companies that want to be near UC Davis.  Some are their direct research partners while others are folks who work on campus and want to take their research and “turn it into the next generation of products.” 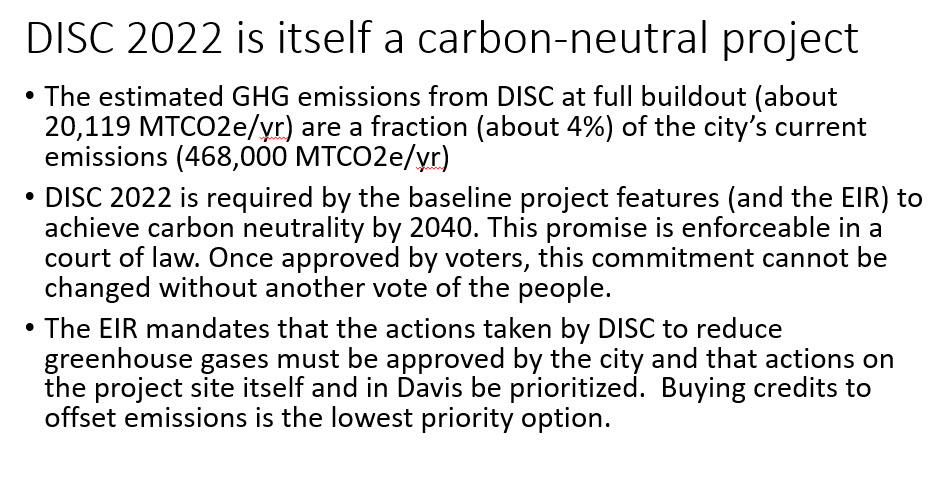 Carson added, “DiSC 2022 is itself a carbon neutral project.

“It’s in the baseline project features, it’s laid out in the EIR,” he said.  “They have accountability with the city of Davis.  They have to get there by 2040.”

20 thoughts on “Part 3: Dan Carson – This Is Going to Pass Tonight, Why Should Folks Vote for It?”