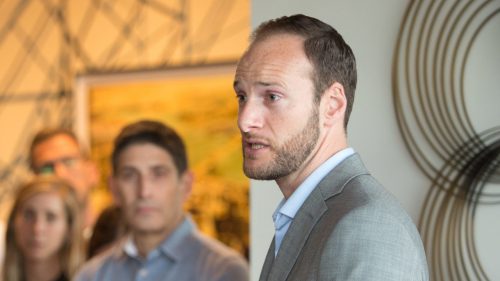 Both DAs have recently come under fire for their progressive reform policies, with many local residents claiming that the “DAs are responsible for an uptick in property and violent crime and are too lenient on offenders.”

The podcast began with an interview with Magnus Lofstrom, policy director of criminal justice and a senior fellow at the Public Policy Institute of California.

A key point made by Lofstrom was that the crime rates seen in San Francisco and Los Angeles are “widespread and non-unique,” in comparison with the rest of the nation.

This fact includes that property crime has dropped notably in both San Francisco and Los Angeles, with overall crime being “pretty low in comparison with before the pandemic,” but there has been a slight increase in homicides, Lofstrom explained.

However, when asked what might be the reason for the slight increase in violent crime, Lofstrom concluded there is a “long list of potential factors that could have contributed [to the crime rates],” and that it would be “very difficult” to put it on any one of those factors.

Lagos questioned whether it was possible to find a link between DAs and local crime rates, to which Lofstrom replied, “There is no research that very credibly and reliably link DA efforts to [negative] changes in local crime rates.”

It was also noted that there is no difference in crime rates in red and blue counties, even though a main point of contention for many people is that both Boudin and Gascón are too lenient with their policies.

After a short break, Megan Cassidy, reporter covering crime and criminal justice at the San Francisco Chronicle, and Frank Stoltze, reporter, KPCC – Los Angeles Public Radio Station, joined to share some of the trends in public opinion that they had seen amid the recall efforts.

When asked what seems to be propelling much of the recall efforts in both San Francisco and Los Angeles, both Cassidy and Stoltze agree that it is “less on the data and more on how people feel.”

This sentiment was further emphasized by numerous comments left by listeners expressing their concerns about the rising crime rates nationally.

Cassidy commented that many people hold individual cases that are documented by the media, such as Walgreen’s robberies, to what they perceive as the public trend.

Stoltze supported this by mentioning certain high profile homicide cases that are “really striking a nerve” with local residents.

In both cases, Boudin and Gascón are “the two most prominent” in the “progressive prosecutor movement,” which has resulted in a few strained relationships in their political spheres, especially since California has “only recently began to embrace these dramatic new policies.”

Cassidy continued by noting that, while critics have charged Boudin with a lower charging rate than his predecessors, his charging rate is not much different than that of Alameda and Sacramento Counties, both of which have more moderate/conservative DAs, with Boudin prosecuting 56 percent of all cases presented.

Additionally, she said that a reason why there aren’t many success stories available that have resulted from Boudin’s new policies is that “while they happen, these people do not want to be in the press… [they]do not want to relive the worst day of their lives.”

Stoltze also commented that many people attribute a lack of order (i.e. homelessness) to crime rates in their cities, causing them to feel like they are confronted with crime through the majority of their day.

Regardless, Stoltze supported Lofstrom’s earlier point that there is nothing to show that Gascón’s policies are what is causing an uptick in crime.

Stoltze concluded his commentary by noting that in both Boudin and Gascón’s cases, people in both counties voted in reform DAs because they wanted change, and what’s left is whether one or both are going to be able to stay in office long enough to make it happen.

Lofstrom responded, “You know it is troubling that there has been a slight increase in crime… but I think if we are going to look at the impact of DAs, we should look at policies implemented by DAs, and how they are affecting the community.”

Nonetheless, Boudin and Gascón have supporters in their respective cities, as evidenced by a caller in San Francisco who contended that there needs to be a focus on reform policies.

The caller stated, “I am deeply against the recall. We have huge issues with poverty and homelessness… the moment we hit a tough spot, we revert to ‘tough-on-crime’ policies,” arguing that many of these policies target minorities.