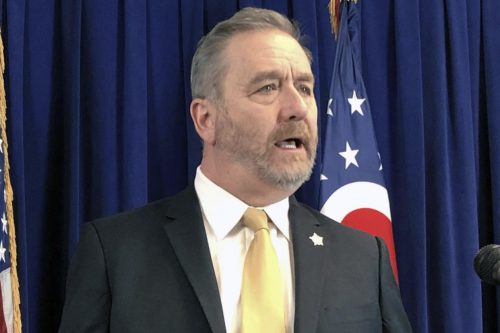 Pro-choice or pro-life? Ever since Roe v. Wade was established almost 50 years ago, there has been an ongoing and heated debate on whether abortion should be legal in the states. Although Roe v. Wade recognized a woman’s right to privacy and ability to terminate a pregnancy legally, there are discussions of overturning the ruling.

Ohio Attorney General Dave Yost, brought a lawsuit against the Biden administration to necessitate family planning clinics that are federally funded to be independent financially and physically from abortion clinics through Title X. Title X which “is the only federal grant program dedicated solely to providing individuals with comprehensive family planning and related preventive health services” was altered during the Trump administration. Trump “implemented a new rule that barred any provider in the Title X network from so much as mentioning abortion care to patients, even if the patient raised questions about it or asked for a referral.” Yost’s goal in this lawsuit is to keep that law in place.

Yost tried to explain that his lawsuit does not “challenge the right to an abortion as guaranteed under Roe.” Yost pushed that these restrictions were “intended as firewalls between family planning clinics” as they receive taxpayer funding and abortion clinics do not. However, his stipulations make it more difficult for people with uteruses to attain an abortion. I believe it should be up to the patient whether they want to seek an abortion not anyone else and there shouldn’t be a law to make it harder for them.

The governments of states such as Alabama, Arizona, Arkansas, Florida, Kansas, Kentucky, Missouri, Nebraska, Oklahoma, South Carolina, and West Virginia (some of which don’t participate in Title X) have shown interest in Yost’s lawsuit. During the lawsuit hearing, the U.S. District Judge Timothy Black from the 6th U.S. Circuit Court of Appeals in Cincinnati rejected the 12 states’ plea to put a pause on the rules for the federal government planning program. Rightfully so, Black decided that the states “failed to prove they’d be irreparably harmed by the rules going into effect” and their case was focused on “policy disagreement, not a legal one.”

Since October 2021, the Biden administration has been actively reforming the rules set up in Trump’s era. Due to Trump’s regulations, which were instated less than two years, 1.5 million fewer patients did not utilize the Title X funded services. In a recent development, on Febuary 8th, it was ruled that “federally funded family planning clinics can continue to make abortion refferals for now.” Since Joe Biden’s presidency, there are new regulations set by the Department of Health and Human Services that are “returning the federal family program, called Title X.” I think this is one step in a better direction. Title X makes healthcare more accessible to the general public and gives the people more autonomy. The program would revert to the way it ran under the Obama administration. This would mean that clinics would be able to refer people in need of an abortion to a provider.

The program would grant over $250 million a year to clinics to “provide birth control and basic health care services” to people with a low-income (many who are from minority communities). Additionally, during Trump’s reign, a number of service providers affiliated with clinics and other independent organizations left in protest. The return of the program will likely lead to 1,300 facilities being reinstated.

Like Rachel Green remarked in Friends, “No uterus, no opinion.” Due to the fact that a majority of government officials are male, I find that the conversation about abortion often leads to the policing of women’s bodies without proper education around the reproductive anatomy. According to a study from the Guttmatcher Institute, when the government attempts to make abortion less accessible, it does not lessen the rate of abortion. Instead, the rates stay about the same and people use more dangerous procedures.

When people are adverse to abortions, they fail to recognize the different situations that make it a necessary step. In Brazil, where abortion is a crime, an 11-year-old girl named Luana Costa was raped and impregnated by a 43-year-old man. Luana died in October 2020 after complications in her pregnancy. There are many valid reasons people might want an abortion, they include but aren’t limited to lack of ability to financially care for a child, the mother could be in danger when bringing the fetus to term, or the fetus could be a result of sexual assault.

I am pro-choice. Pro-choice does not necessarily mean pro-abortion. Pro-choice allows the person involved to make their own decision based on their situation and their own beliefs. We need to work on making healthcare, sex education, and birth control options easier to attain. Only then will abortion rates start to drop. I believe that the Biden administration is going in the right direction by reinstating Title X to its former glory after it was removed by the Trump administration.

Share:
Previous : AG and Others Push for Renegotiated MOU Between SF DA and Police
Next : California Mask Mandate To Be Lifted For Vaccinated People On Feb. 15