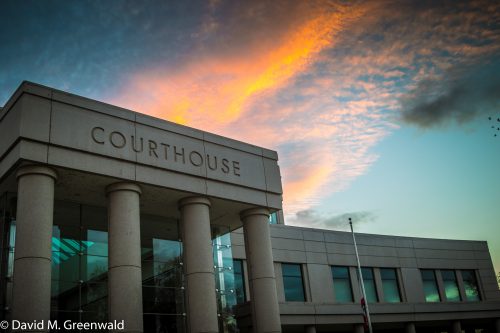 By Gracy Joslin and Sophia Barberini

Lancaster was charged with two felonies and multiple misdemeanors for conspiracy to commit ID theft, and related crimes. She accepted a plea deal, pleading guilty to one felony and all the other charges were dismissed.

Prior to instituting the sentence, Judge Rosenberg heard from Deputy Public Defender David Nelson, who attempted to highlight the intelligence and youth of Lancaster.

Lancaster “has her whole life ahead of her and hopefully she will use this as a vehicle to do better things… I find that Ms. Lancaster is an intelligent, bright, and articulate young lady who fell in with the wrong crowd… I think she has learned a valuable lesson in life at this point,” said PD Nelson.

Concurring with PD Nelson, Judge Rosenberg stated, “She is a young woman, still in her 20s, so [she’s] got a lot of living left to do.”

Despite her young age, Judge Rosenberg was “troubled” by Lancaster’s claims that she was set up for the crime—Judge Rosenberg initially believed Lancaster argued the police set her up.

“Ms. Lancaster stated she feels she got set up, and maybe she did fall in with the wrong crowd, but that kind of comment would put her in the category of the wrong crowd,” declared Judge Rosenberg.

PD Nelson, however, argued Lancaster thought she was being set up by her friends and not police, adding, “I think what she meant was that she was made the scapegoat by people who are more sophisticated in this sort of crime. I don’t think she believes that law enforcement or the system set her up.”

Judge Rosenberg, understanding his misinterpretation of Lancaster’s words, was still concerned, noting that you are the company that you keep.

The judge advised, “Well, you got to pick and choose your colleagues and friends a lot better,” and gave Lancaster probation—she’s been in custody for several months—so that “Ms. Lancaster can start choosing better paths going forward.”