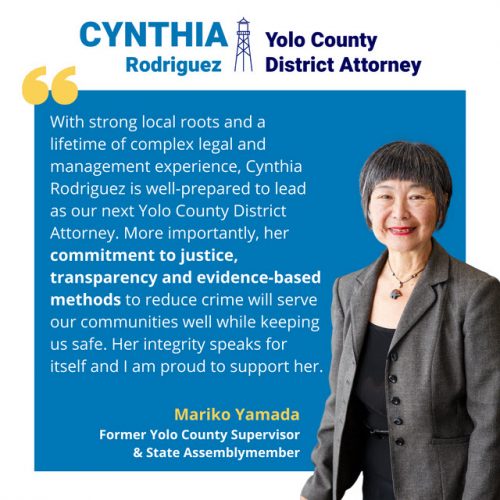 Cynthia Rodriguez, candidate for Yolo County District Attorney, has picked up several endorsements to be the next Yolo DA in the past few months.

“With strong local roots and a lifetime of complex legal and management experience, Cynthia Rodriguez is well-prepared to lead as our next Yolo County District Attorney,” Yamada said. “More importantly, her commitment to justice, transparency, and evidence-based methods to reduce crime will serve our communities well while keeping us safe. Her integrity speaks for itself and I am proud to support her.”

“America is entering a new age where we must rethink the role of law enforcement and district attorneys.

Cynthia represents everything we’ve learned in the last ten years about justice and how to achieve it. She is really in step with the thinking and people of Yolo County. We all feel comfortable around her,” Alcala said.

Alcala thinks that Rodriguez will have an approach that will reduce recidivism rates and not punish those who commit low-level crimes while suffering from mental health.

“Reisig wouldn’t talk to me before I was an elected official. Cynthia takes the time to listen to everyone she can,” Alcala said.

Acala supports Rodriguez independently and does not endorse Rodriguez on behalf of the West Sacramento Council.

“Cynthia Rodriguez is a dedicated public servant who has fought for equal justice for over 40 years. I am confident that as District Attorney, Cynthia will improve public safety and health, common-sense criminal justice reforms, and lead her office with transparency and integrity,” Delaine Eastin, Former State Superintendent of Instruction, said of Rodriguez.

“Cynthia has a strong vision for how to use the power of the DA’s office, and we wish her the best of luck in the upcoming election,” the Davis College Democrats said in a statement.

Yolo County has never had a woman as its District Attorney.

“It’s time we recognize the strength and perspective that women bring to the leadership table, particularly here in Yolo County. That’s why I’m proud to have the support of trailblazing leaders in our community like Betsy Marchand, Mariko Yamada, Delaine Eastin, and many others,” Rodriguez said.

DA Reisig has not updated his list of endorsements from 2018 and his campaign could not be reached for comment.