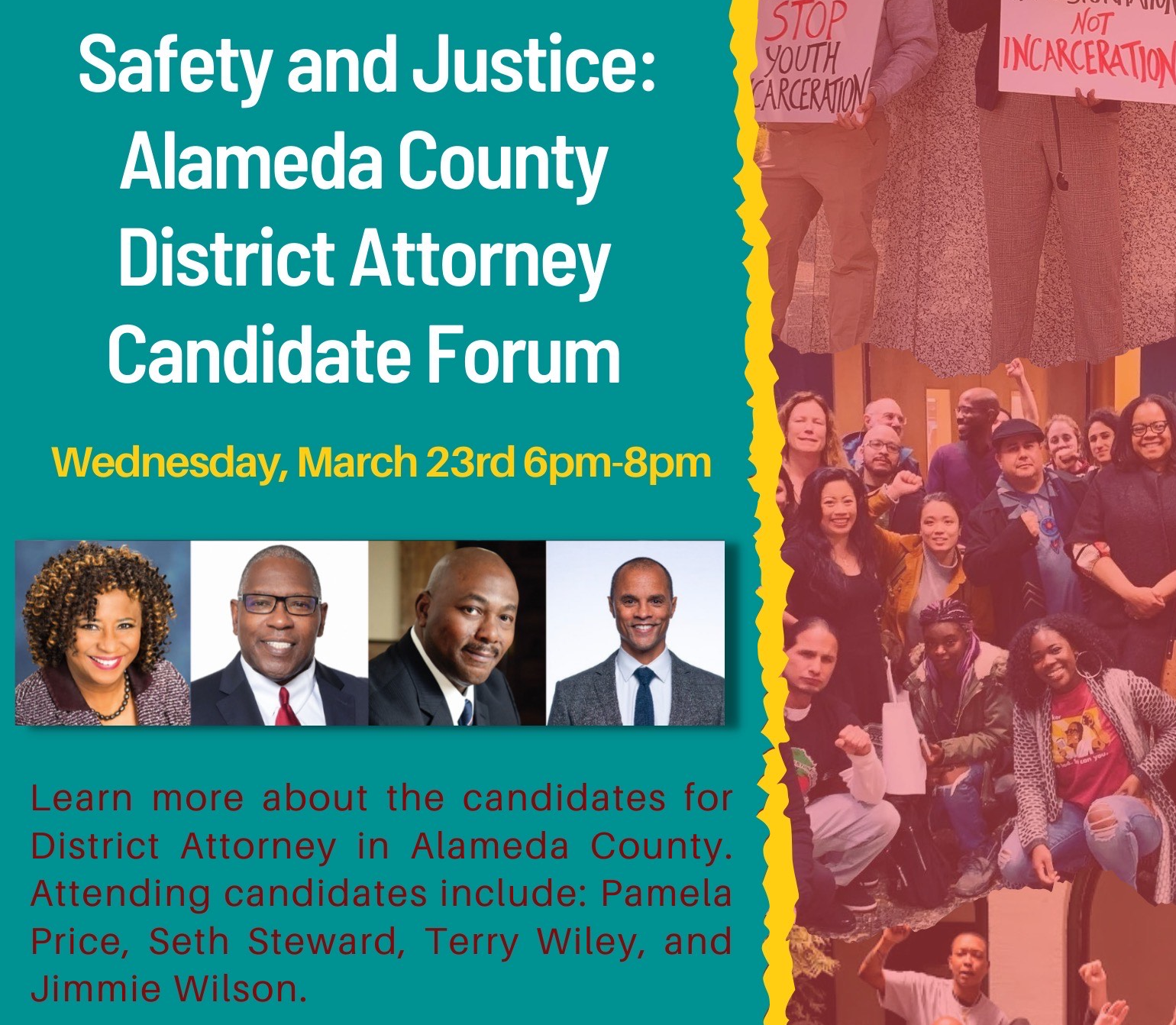 The Alameda County District Attorney Candidates met on Wednesday in a candidates forum hosted by the Justice Reinvestment Coalition of Alameda County and Urban Peace.  Nancy O’Malley declined to seek reelection and there are four candidates vying to replace her.

Running are: Pamela Price, a civil rights attorney who ran in 2018; Terry Wiley, the Chief Assistant DA in Alameda County who has the backing of O’Malley; Seth Steward, who worked in San Francisco as a DA under both Kamala Harris and George Gascón; and Jimmy Wilson, who is a DDA under Nancy O’Malley.

Pamela Price called herself “a drum major for justice.”  She said, “I’m a survivor of the Ohio juvenile justice and foster care systems. I’m also a survivor of the Alameda county criminal justice system, and I’ve dedicated my life to fighting for justice for everyday people and standing in the gap for 30 years.”

She said, “I decided to run for district attorney because far too many district attorneys have forgotten that their mission is to protect public safety. By advancing justice. Prosecutors have been at the heart of mass incarceration. They literally drove the bus from the playground to the prisons.

“We must root out the racial disparities that have infected our criminal justice system. Break the school to prison pipeline, give everyone a second chance at a first class life and create a new culture of transparency, integrity, independence, um, and equal justice in the DA’s office,” she added.

Terry Wiley said that “we have a district attorney’s office that needs new leadership.” adding “safety and justice does not have to be a choice of one or the other.”

He noted that he received the support of all 17 police chiefs in Alameda County and also the support of Civil Rights Attorneys John Burris and Benjamin Crump.

He later added, “I’m not way over to the left and I’m not way over to the right. I represent the middle where safety of the community is of primary importance. I know we’re talking a lot about mass incarceration that has occurred in the past and changes that we wanna see to the system, but we’re out there every day.  People are concerned about having a gun stuck in their face, being robbed.  They’re having their cars broken into and having their homes broken into.”

Seth Steward noted, “We will be electing our first Black DA here in Alameda County.”  (All four candidates are Black).  “That said,” he continued “we can continue with the status quo or we can do something different.

“We need to get out of the status quo silo and we need to invest in changes,” he said.  “For example, ending the death penalty, creating a resentencing unit prosecuting officers who violate the law, and reforming the juvenile justice system. These are all things that I have in my platform.”

Jimmy Wilson explained, “In January of 2020, I walked into Nancy O’Malley’s office and I told her I was running for district attorney. I am not her choice for for this job. I’m running because many lives have been destroyed under the failed policies of the current leadership.”

He said, “I’m here to reverse the devastation that our community has suffered to bring back a sense of hope and to lead us towards a brighter future, a future where everyone in the community can feel safe and respected. “

He said he has spent 17 years in the courtroom “handling some of our county’s toughest homicides, sexual assaults, child molestation, and human in trafficking cases.”

He also said, “I’ve independently investigated multiple officer-involved shootings. And because of my reputation for uncompromising ethics, I was asked to interview judicial candidates for the Alameda County Superior Court.”

Later he said, “I agree with the ACLU that the DA’s leadership has failed our community.  We must collect data about our work and share it with the public.”

In response to a question on mass incarceration, Terry Wiley said, “I agree. I think that there has been an absolute over-incarceration that has occurred in American society.”

He mentioned that he and Kamala Harris started together in 1990. “There would be days we would sit in court, and the only people coming through the side door into the courtroom were all African Americans.”

He said, “We could sense and see that there was something wrong with this picture.”  He said, I feel it is incumbent upon the district attorney’s office to take an active role, to try and correct some of the over-incarcerating that occurred in the 1990s in the first decade of the 2000s.”

Pamela Price said, as the next district attorney, “I will be very intentional and specific about looking for alternatives to incarceration.”  She said, “I have a proven record of making a difference where I can and when I can.  I will be a voice for the community in this regard, because we have been subjected to mass incarceration by the criminal justice system in this county.

“I’m not just going to bring something here. I want to be in partnership with the community,” she said.  “So we all will have a voice about what we actually do.”

Jimmy Wilson said that “my plan is to expand diversion programs throughout the criminal justice system.  Right now the criteria for who gets into the diversion is limited to a certain amount of crimes.”

He said, “That’s bad because a lot of times there are cases that are overcharged, so when you overcharge a case, that limits the ability for people to get out of the system.”

He pointed out that Terry Wiley had made comments about the juvenile justice system and how he drove down the juvenile population within the system.

“Well, that decrease did happen,” he explained, “but that decrease did not happen because of something he did. This was a product of police officers stopping bringing in kids for minor offenses and booking them into juvenile hall.

“There was a report done by the Alameda County Probation Department that points out that this didn’t have to do with the DA’s office.”

“Right now they are completely underutilized,” he said.  “The ACLU put out a report last year.  They said over the 55,000 misdemeanors that could have gone to diversion less than 2000 people did between 2017 and 2018. And that’s just the data that they had because of the incomplete data in the DA’s office, which is also something that needs to be fixed.”

He said, “Alternative courts are great. They provide services, addressing trauma, mental illness, substance use, and they mitigate the possibility of future violence.”

The next question was how they would reduce pretrial incarceration.

Pamela Price said, “First and foremost, I need to hire prosecutors who want to change lives and not destroy them.”

She gave the example, “In 2020, I worked with a family whose family member had been incarcerated for four years. There was a five year enhancement on his sentence. The sentence had been overturned by the court of appeal due to prosecutorial misconduct.”

But she said “we had to fight, fight for months to get this gentleman out of jail, because the DA insisted that he wanted to impose a $500,000 money bail requirement before this gentleman could be released.

“So you have prosecutors that are committed to incarcerating people, even when they’ve been found to be innocent.”

Jimmy Wilson, “My plan is to rebuild the district attorney’s office.”

He gave the example that, currently in the Dublin branch, “there are 2,500 cases that are pending, and there’s only six DAs handling those cases,” and four of those six have less than five years of experience.  “That puts a drain not only on the office, but a drain on the criminal justice system.  I will work to put more resources in our office.”

Seth Steward said “with regard to reducing dramatically pretrial incarceration, what we’re talking about most fundamentally is cash bail.”  He said that “cash bail has created a two-tier system of justice, where if you have money, you get to remain free. If you don’t have money, you remain in jail while your case is pending. This is neither fair, nor just.  As district attorney, I will no longer seek cash bail for individuals who pose no danger to the community.”

He said, “So if you were an African American kid or any kid in Oakland, and you got arrested, you were taken to the hall.”