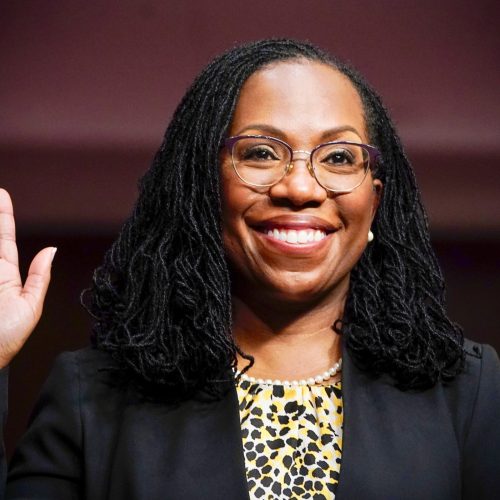 WASHINGTON–  On Feb. 25, 2022, President Biden announced the nomination of Judge Ketanjii Brown Jackson to the Supreme Court. Judge Jackson, who will presumably fill the seat of the retiring Justice Breyer, is poised to make history as the first black woman to serve on the Supreme Court.

Judge Jackson’s qualifications are impeccable. She graduated from Harvard Law School, served as a law clerk for Justice Stephen Breyer, and currently sits on the D.C. Circuit Court of Appeals. If confirmed, she will also become the only sitting justice to have served as a public defender.

While the White House has emphasized Judge Jackson’s impressive qualifications, President Biden also acknowledged the historic nature of Jackson’s candidacy. The optics of the Feb 24 introductory press conference were stunning– a President of the United States speaking to the American people with the first black and first woman Vice President of the United States over his left shoulder and the first black woman to be nominated to the Supreme Court over his right. It was a historic event prolonged for far too long. For many Americans, it will be the first time the Supreme Court has a member with whom they can identify.

There should be no doubt that the confirmation battle will be contentious. Beginning with the failed nomination of Robert Bork in 1987, Supreme Court confirmation battles have become increasingly partisan. In 2017, Senate Majority leader Mitch McConnell “went nuclear,” lowering the required number of Senate votes needed to confirm Supreme Court nominees from 60 to 50 in order to confirm Justice Gorsuch over Democratic opposition. As a result, Presidents have little incentive to nominate a Justice who appeals to a broad bipartisan coalition of Senators.

Many remember the spectacle at Justice Kavanaugh and Justice Barrett’s confirmation hearings. Justice Kavanagh badgered Senator Klobuchar about her use of alcohol, clearly not knowing that her father died of alcoholism (he later issued a less than sincere apology). Amy Coney Barrett refused to answer questions about Roe v Wade, and the Senate confirmed her in record time just days before the 2020 election. Republicans saw criticism of Kavanaugh’s sexual abuse allegations and Barrett’s speedy confirmation as unfair partisan attacks from Democrats.

Some Republicans will certainly see Judge Jackson’s hearings as an opportunity for retribution against Democrats. Lindsey Graham, the current ranking member of the Senate Judiciary Committee, offered a preview of Republican attacks, lamenting that “the radical left has won President Biden over again.” Republicans will most likely use a similar strategy to the one they have employed in confirmation hearings for many of Biden’s cabinet nominees – paint them as rabid, fire-breathing socialists.

Democrats cannot afford any defections in the Senate; they will need all 50 democratic votes to confirm Judge Jackson. Jackson received modest bipartisan support after her elevation to the D.C. Court of Appeals. Senators Graham, Murkowski, and Collins all voted in support of her appointment. Democrats are hoping Jackson’s confirmation will go smoothly and not turn into a brutal partisan battle.

Jackson’s nomination will not change the overall ideological balance of the court. A 6-3 conservative split will remain for the foreseeable future. However, a Democratic President replacing an 82-year-old justice with a 52-year-old judge will presumably preserve one of the remaining liberal seats on the court for thirty years or so.

Moreover, Judge Jackson will have the opportunity to write many forceful dissents that could provide the groundwork for a later progressive legal movement. For example, Justice Steven’s dissent in Bowers provided the legal reasoning for Kennedy’s opinion for the Court in Lawrence, a case striking down a Texas law banning homosexual sexual activity as unconstitutional. Judge Jackson may have a similar opportunity to write powerful dissents on matters regarding criminal justice, the environment, and labor rights.

Jackson’s nomination is historic. Jackson’s confirmation to the bench would be a major victory for President Biden, but she will have to endure a mountain of criticism on her journey to the Supreme Court.

Jack Galloway is a freshman at UC Berkeley studying Environmental Economics and Policy. He has a passion for covering legal issues such as Supreme Court decisions and proposed legislation.