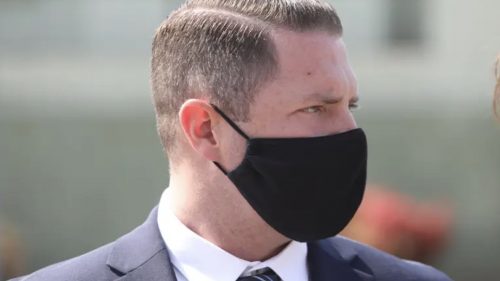 Should people’s trauma pardon them for their crimes? Although one’s childhood has the ability to shape one deeply, I don’t believe that a person’s behavior can be excused based upon their upbringing. People need to take responsibility for their actions.

In November of 2018, in Danville, California, the police were called for reports of “a suspicious person… knocking on the door and lingering outside homes.” When the officers arrived, they saw Laudemer Arboleda driving away in his car, and initiated a slow-speed chase. As Arboleda left the scene, Officer Andrew Hall stood in front of Arboleda’s Honda Civic and sent ten rounds through the front windshield. Although Hall could have easily moved out of the way, his attorneys stated that Hall feared getting run over, so he fired and hit Arboleda nine times, killing Arboleda.

Arboleda’s family wanted Hall retried for the jury’s conviction of voluntary manslaughter in October 2021. Instead, on March 4, Hall was sentenced to six years in state prison. It took two years to sentence him from the initial trial. For shooting someone nine times, receiving only six years in prison seems like an easy punishment. Especially when a similar situation has occurred before, with Hall killing Tyrell Wilson in 2021. Hall was cleared of any wrongdoing after a nine month administrative probation. However, this current prison sentencing has sparked much debate over whether six years is too much time, or too little.

Although KTVU should not display a blatant bias, they believe that “Hall had a hard life— including a neglectful father who was married five times and a mother who was a methamphetamine addict who ignored him and his brother for a series of unsavory men.” This information is linked to arguments that Hall should have been given a lesser sentence even though he killed a man— which some have obviously connected to his harsh childhood.

Although Hall’s upbringing was difficult, I do not think it warrants a lesser sentence. First, as a police officer, Hall was required to take a psychology assessment before his employment which was “designed to rule-out significant mental disturbance or personality disorder that would be incompatible with the role of a police officer.” As Hall was able to become a police officer, I can only assume that his history did not raise any flags that affected his acumen.

Second, Hall’s attorneys claimed “fear” as the main reason for his actions. Hall’s childhood does not concern or affect that logic either because fear arises regardless of one’s childhood experiences and plays an integral role in decision-making for everyone. Additionally, Jeannie Atienza (Arboleda’s mother) claimed that Arboleda “was having a mental crisis.” His mother never went into further details, but if the same rationale is applied to Arboleda, his actions did not warrant any gunfire due to his lack of mental stability. Arboleda was only loitering outside homes and evading the police at a meager six miles per hour. He certainly did not deserve to get shot and die.

If people pardon Hall’s actions, what does that say about the treatment of Arboleda? Although “Sheriff David Livingston has dismissed suggestions that race– Arboleda is of Filipino descent, and Hall is white– played a factor” in the event, it raises questions about whether peoples’ treatment of the case has anything to do with white privilege. Jeannie Atienza “wondered if Hall received special treatment as a white man” due to delays in the trial. There was a lack of urgency to find justice for Arboleda’s murder. Hall even spent two years free awaiting sentencing! Thus, Atienza pushed for the maximum penalty sentence of 17 years. Recently, however, she stated that she was satisfied with the six-year sentence.

If Hall was not a white man, he would not have had the same support from the general public, or stations such as KTVU. According to Open Society Foundations, black people and Latinos are more likely to be disadvantaged during sentencing. It is less likely that the community would advocate for clemency for a person of color (even a person with a terrible upbringing). Therefore, in my opinion, Hall’s six years of prison were lenient enough.

KTVU still criticized Judge Terri Mockler of the Contra Costa County Superior Court by saying that he did not take Hall’s history into account. Prosecutors argued, during trial, that “Hall used unnecessary force and endangered fellow officers and bystanders.” Mockler agreed with the prosecutors and defended his judgment clearly, stating: “[Arboleda] did not deserve to die for evading a police officer — that is the crux of this.” The fact of the matter was that Andrew Hall did not think carefully about his actions, including how he could have endangered other people. He killed Arboleda when it was unnecessary.

Hall’s childhood should not influence his sentencing and I agree with the judge: Hall can’t claim trauma to justify his actions. Hall’s attorneys are pushing for leniency, but Hall needs to take responsibility for the immeasurable harm and pain he caused by taking another person’s life. The police are stationed to protect and serve, but Hall has failed his duty and failed to take accountability for his actions.