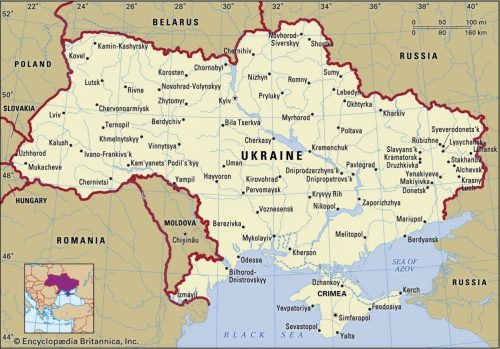 Russian troops have landed in Ukraine after Putin denied that they were planning to invade. This is a matter of great concern and the United States should be doing more to aid Ukraine. According to the LA Times, “Putin has said that the collapse of the Soviet Union was one of the greatest disasters in modern history.” He does not think of Ukraine as its own separate country and has plans to reconstruct the USSR (Soviet Union). Because Ukraine had been progressing towards westernization ever since it elected democratic officials in its parliamentary election in 2014, Vladimir Putin’s ideal of the USSR was threatened.

On Feb. 24, explosions began in Ukraine’s capital city, Kyiv. Picture the radical change: starting with a regular lifestyle, hearing about rising tensions between countries on the news, and then seeing residential buildings get shelled the next day. Don’t many wars start like this? There’s always a strand of denial in the beginning. Most people, in fact, did not believe that Russia would invade. But it wasn’t long before loud sirens blared in warning and bombs were released overhead, debris and shrapnel littering the ground. This is the reality for Ukraine. Those who live in Kyiv needed to make the choice to either flee or to stay, while the people that decided to remain in Ukraine rushed to collect necessities to bring to bomb shelters.

The next day, on Feb. 25, there was a missile attack on the capital. More citizens evacuated, increasing traffic and anxiety about the situation. On the 26th, more missiles hit a residential building. By this day, about 120,000 citizens left the country, “while hundreds of thousands more” were “internally displaced.” Streets are desolate and a city-wide curfew of 5am – 8pm was established. More detonations went off on the 27th as Ukraine’s forces were outgunned while they protected the capital. The Ukrainian President, Volodymyr Zelensky, urged citizens to “defend their country.”

The United States is involved. In response to Russia’s attack, President Biden stated that troops have been stationed in countries bordering Ukraine. Instead of dispatching direct aid to Ukraine, the purpose of the forces is to “defend our NATO (North Atlantic Treaty Organization) allies and reassure those allies in the east.” When discussing the United State’s military strength, the US ranks 1 out of 140 countries in global firepower. Although Ukraine is not a part of NATO, I believe that the United States should be more like Lithuania in how they send military support to Ukraine. Although the US is sending weapons and ammunition, there needs to be more of an involvement. There are human lives at stake and many have already died due to the brutality of war. This violence will only escalate with more deaths and casualties, until more parties are involved.

Additionally, the White House announced Russia’s “kill-list” for Ukranians. They sent a letter to the United Nations stating that the list functions to suppress resistance and work on taking total control of Ukraine. It reports that “journalists, activists, ethnic and religious minorities, and LGBTQ Ukrainians” are going to be targeted. The US did not reveal where they received the intel on the kill-list. Thus, there is speculation that the US has ulterior motives for escalating fears of the war with the kill-list information.

China and Russia are concerned with NATO’s eastern expansion in Europe as it would lead to a political imbalance among the countries. Thus, China accused the US of creating unnecessary panic over Ukraine and “called for talks to reduce rapidly building tensions” by sending weapons to Ukraine. China’s ministry spokesperson Hua Chunying believes the conflict can be handled diplomatically through “peaceful solutions.” With the historic tensions between the United States, Russia, and China, I believe that they all have political stakes in the outcomes and the progression of this war. Although the United States may be worried about the wellbeing of Ukraine’s citizens, there are much larger things at play.

Along with myself, 77% of Americans are concerned about the Russian invasion of Ukraine. The Russian-Ukraine crisis does affect America because of NATO, so we should be prepared to take action. Not only does the situation connect to our supply of gas and electricity, but if Russia ends up taking over, it could set a precedent for other nations. Other countries may seize the opportunity to colonize smaller territories. This would lead to more war over territory lines, inevitably breeding more violence.

The whole situation occurring in Ukraine is utterly upsetting. However, the most frustrating part personally is that some people have centered the conversation around themselves and turned the conflict into a laughing stock. I’ve seen many memes on TikTok joking about getting drafted for World War III. Although these jokes may bring attention to the crisis, it comes off as insensitive. The TikToker @sovietdropout, who is from Ukraine, mentioned her dismay at the memes, with “y’all… who keep making the war in my home country about you are so gross you’re not gonna get drafted.. You care more about your life than the innocent civilians right now. My people are being killed and are getting bombed but yeah Jared I’m so worried about you getting drafted.” There are people dying, fleeing for their lives, missing loved ones, and the WWIII jokes about getting drafted fail to take the situation seriously. It distracts from the conversation about how something needs to be done. I feel that, as Americans, we are so removed from conflict that our interpretations of how to behave in relation to other countries may come off as callous.

As we talk about Ukraine’s spotlight on the internet and social media, Ukrainian President Zelensky has gained a global fan base for his actions and loyalty for his country. Despite his acclaim, on Mar. 1, Zelensky stated, “It’s very serious, it’s not a movie… I’m not iconic, I think Ukraine is iconic” as he released a State of the Union speech. He urged Biden to send a message about the Russian invasion on how it was “a war for the values of democracy, freedom” and also to garner more support in their fight. Zelensky had spoken to Biden many times before, but Ukraine still needs more assistance, “Ukraine will resist and fight stronger than anyone else but on our own against Russia we won’t manage it.” Zelensky implored more countries to send their aid now as “this is the moment.”

I think it is important to highlight how this ongoing conflict is resulting in bloodshed—one that should be avoided at all costs. Putin is forcing his governance on a sovereign country as a way to increase his power and dominance. I believe that other countries, like the United States, should step up for Ukraine to help the innocent civilians and uphold the international humanitarian law stated by the UN. The international coverage should amass more support among, not only the government, but the citizens. To follow the events in Ukraine, CNN updates their live coverage and Ukrainewar hosts information and resources on how one can contribute aid and funds.

3 thoughts on “Student Opinion: US Involvement in the Russian Invasion of Ukraine”