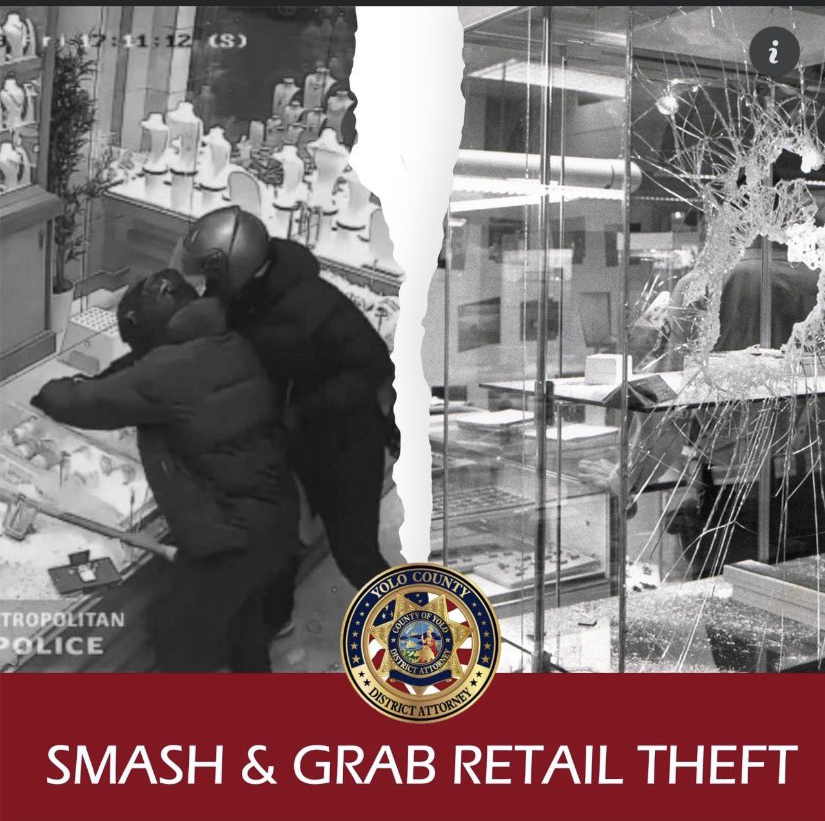 Woodland, CA – This week Yolo County DA Jeff Reisig announced that two individuals were arraigned in court on multiple charges including robbery and retail theft.  They were arrested for a March 17 incident but also allegedly involved in organized retail theft dating back to incidents in West Sacramento from December 27 and January 8.

The press release does not state it, but these are clearly felony charges.  One of them is charged with an enhancement for being armed with a deadly weapon during the commission of the robbery and threats, and the other has a prior strike offense.

But the bigger issue here is that Reisig has made a big deal out of Prop. 47 limiting his ability to hold people engaged in retail theft accountable.

During the candidates’ forum in Woodland, Reisig complained that “the much bigger issue, the retail theft problem is across

California and it’s what’s driving these smash and grabs. As long as it’s under $950, nobody is going to jail because the law says that these people get a ticket. That is a broken law.”

Leaving aside the fact that the $950 level was a raise from the previous level of $400 that was way too low for felonies (and hadn’t risen in a several decades) and even $950 is less than that of a number of states including Texas, which is $2500.  And yet, we don’t hear about the $2500 level in Texas being a hindrance to law enforcement.

And yet, as we saw in this case, for the more serious offenses DAs find a way to charge them as felonies.

For instance are the two from Antioch who were charged with multiple felonies by the DA’s office, after the two were arrested by Davis Police on December 9 for a series of thefts starting in Woodland and ending in Davis the same day.

How did they get to felony?

First, because they allegedly committed organized retail theft on two or more occasions with a value exceeding $950.

Second, they also faced felony conspiracies to commit a misdemeanor for each of the locations they hit.

For example, the complaint alleged they drove to the CVS in Davis together, entered the store each carrying an empty bag, and “filled up the bag with approximately $366 of merchandise and left the store without paying.”

While I tend to oppose the use of charging conspiracy to commit a misdemeanor as a felony, it does demonstrate that the DAs have a lot more tools in their box than they are letting on.

It means there are basically three ways to get felony charges in these cases.

One, when the value exceeds $950—which it often does.

Two, if it becomes a robbery because they are using force or perhaps if they are carrying a weapon and it produces fear, because no one wants to confront them to stop them from taking the merchandise.

And three, any time it is part of an organized retail ring—even if they can’t name the co-conspirators, they can charge it as felony conspiracy.

Even Chesa Boudin in San Francisco was able to charge nine people arrested in the infamous retail theft in Union Square with felonies.

Five of those involved were charged with looting during a state of emergency, second-degree commercial burglary, grand theft and receiving stolen property, the San Francisco District Attorney’s Office said in a news release.

The looting charge is perhaps questionable—and definitely temporary since California remained under a state of emergency, but even without that, they were able to charge felonies.

My point is very simple: DAs have the ability to charge felonies in most of the more serious cases under existing law when they need to—and sometimes, I would argue even when they probably shouldn’t.

The one example where they might not was the example that Reisig gave of his nephew.

During the candidates’ forum, he related, “The other thing that Prop. 47 did was raise the threshold to $950 so you can steal up to $950 a day and it’s a misdemeanor. That’s what’s fueling, along with the addiction crisis, this rampant increase in retail theft. This is what my nephew does, by the way, he steals every day to support his habit. Everything he does is a misdemeanor.

He continued, “They write him a ticket, if he doesn’t show up at court, nobody’s going to come for him. And the cycle continues and continues. This is what’s happening. I charge these crimes, I charge them all and about 60 to 70 percent never show up. This is what Prop. 47 did. It was well-intentioned, they wanted to get more treatment for people. They wanted to reduce the penal consequences for drug use. I don’t disagree with that. But we can’t continue to allow people to use, steal and live on the streets.”

But is that true?  Failure to appear is a bench warrant, for one thing.

The same is true for petty theft.  That’s not nothing and it’s more than a ticket.

Jeanette Zaniptain, the California State Director of DPA, added, “One reason the DA may be calling it a ticket is local policies around cite and release, where people arrested for drug possession are given a citation with a court date or possibly booked into jail and released shortly thereafter with a court date.”

She said, “From our view, this is better than having people sit in jail pretrial.”  She added, “We are hearing that in some counties, individuals are in jail waiting for placement into a treatment facility that can take upwards of 6 months sitting in a jail cell.”

The notion that the only way there can be teeth is through felony charging therefore is false.  Moreover, multiple misdemeanors can lead to additional time in jail.  If someone is really committing misdemeanor theft every day, Reisig would have you believe they are helpless to stop them, but that’s not true.  People can end up serving time in custody for misdemeanor petty theft, even on those occasions that the DA can’t find a way to get a felony charge on them.

2 thoughts on “Sunday Commentary: Reisig Complains about Prop 47 but Always Manages to Get Felony Charges When He Wants”