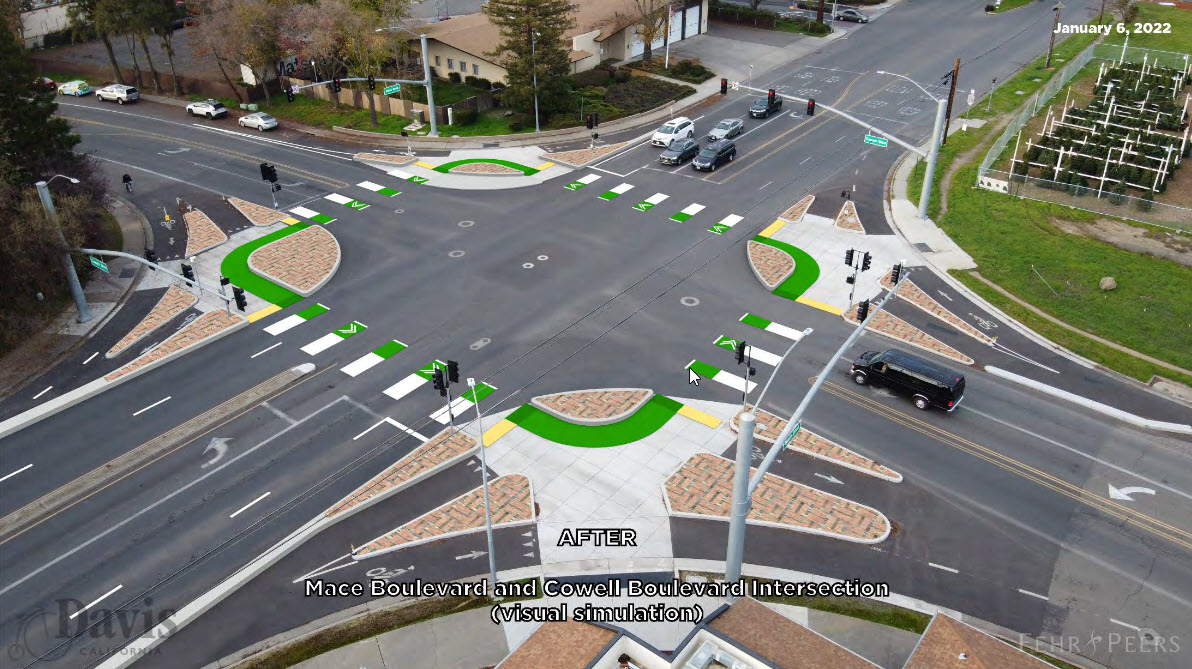 Davis, CA – I want to put this into proper context.  I’ve never been a fanatic on the issue of Mace Blvd. and the redesign.  I firmly believe that the structure of the road was dangerous and problematic for non-automobile traffic and needed to be revised.  Moreover, I also believe that the traffic problems were incidental to rather than caused by the redesign.

To bolster that view, I have pointed out that there were times even before the redesign when the entire corridor was locked up.  Moreover, pre-pandemic at least there were a number of times when traffic backed up to Harper Junior High on the north

side and that direction was completely unaffected by the redesign.

I have never used the term “Mace Mess.”  I think the use of the term misses the confluence of events that caused traffic backups—much of which will not be alleviated by another redesign.

With that said, I read the staff report and was appalled by the proposed sticker price.  In the report on Friday, I actually intentionally buried the lead until I could talk with city staff and councilmembers to clarify what I was reading.  None of the commenters remarked on the price tag. 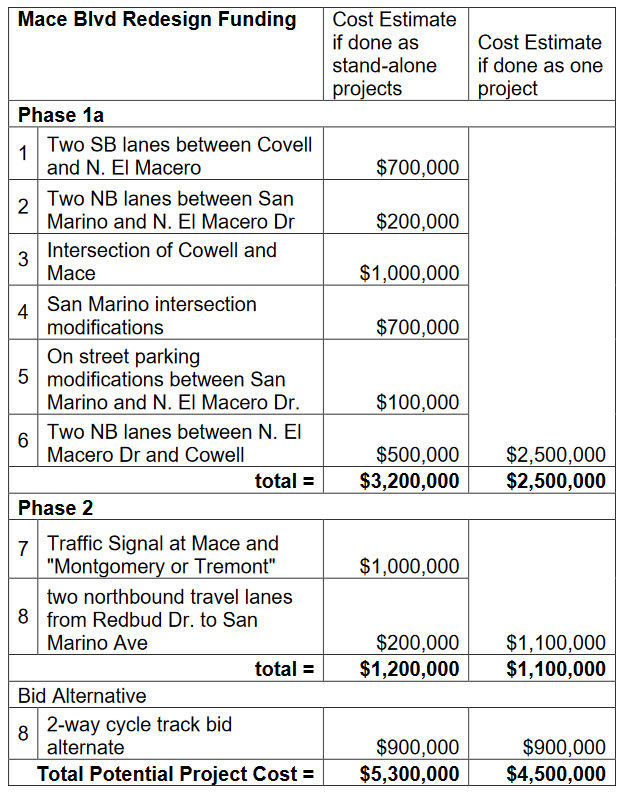 So here it is.  The sticker price for all of the proposed changes is a whopping $4.5 million.

The first phase costs are about $2.5 million, which is cheaper by nearly three-quarters of a million to do it all as a single project rather than separate it out.

The total cost jumps to $4.5 million.  Are they really going to not do a signal at Mace and Montgomery or Tremont that would hopefully help to meter some of the bypass traffic?  So, while I get the point that the council may balk at the total package, you have to wonder what they would really want to cut out.

It is important to note the difference between one-time money and ongoing money.  The ladder truck has not only one-time costs but ongoing personnel costs that the city must pay for every single year.  This is a one-off.  So, if they get grant funding or use ARP (American Rescue Plan) to fund it, then that offsets a good deal of the cost.

But the cost is enough that the council should really ask the question—is this really the best use of money right now?

But as I said at the outset, how much of the problem will this fix—at least during peak times?  Will having the second lane allow the local traffic to move through the corridor or will it get jammed up with bypass traffic which then has to merge back onto the freeway onramp lane?

Listening to people who live along Mace, especially those in El Macero, they seem to want things the way they were—without recognizing that they probably are never going to get things like they were because the conditions have completely changed over the last seven years, and will worsen as the world starts to more closely resemble 2019 than 2020.

The county and El Macero apparently want the city to go further—but are they willing to kick in money to make that happen?

For those who say this was the fault of the city to begin with, they have a point.  There needs to be some sort of reckoning and accountability here.  $2.5 to $4.5 million is not pocket change for a city with the budget size that Davis has.  That’s a major expenditure.  And it’s on top of what was spent when they did this the first time.

I will stop short of proclaiming “heads must roll” but it doesn’t seem like the council—even if it was past councils—has really owned up to the problem here.

At this point what’s done is done.  Going forward, it would seem prudent, however, that council once again asks what is the bang for the buck here—and how much will throwing good money after bad actually improve things?

7 thoughts on “Sunday Commentary: The City Wants to Fix Mace, but at What Cost?”