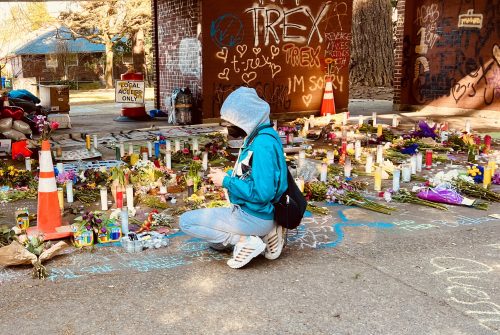 Portland, OR–Authorities identified a man associated with neo-Nazi groups as a suspect in the shooting of five protestors, resulting in one death.

On Feb 19, during a protest in Portland, a man opened fire on several people, injuring five. One woman, Brandy Knightly, 60, died at the scene after being shot in the head, while paramedics took four others to the hospital. Two are currently in critical condition, with one victim paralyzed from the neck down. The hospital discharged the two other victims.

The crowd was protesting the death of Amir Locke, a Black man who was shot and killed on Feb 2 in Minneapolis by police during a no-knock warrant raid. Locke was not mentioned in the warrant and did not live in the searched apartment. In the eyes of numerous people, the shooting was unjust. In a speech to hundreds of people at Locke’s funeral, Reverend Al Sharpton said that “Amir was not guilty of anything but being young and Black in America.”

Authorities have revealed that the suspect in the shooting on Feb. 19 is Benjamin Jeffrey Smith, 43, who lived near the location of the protests. Smith is associated with neo-Nazi groups and contributes to anti-Semitic discourse online. According to an affidavit filed by Attorney Mariel Mota, who watched a video of the incident, Smith confronted the group on Feb 19, Saturday night, when a protester told him to go home. Mota writes that “[Smith] responds by demanding they ‘make’ him leave and he approaches a participant aggressively, who pushes back.” The affidavit states that, after a short period of yelling at the group, Smith drew his gun and fired at them. According to authorities, he only stopped firing when shot in the hip.

Protests around the country frequently encounter violent opposition. During the Black Lives Matter protests in the Summer of 2020, there were “dozens of car-ramming attacks by individual perpetrators—in some cases acting independently with no reported affiliation, and in others linked to hate groups like the Ku Klux Klan,” as recorded by The Armed Conflict Location & Event Data Project.

Smith’s roommate, Kristine Christenson, 33, stated that Smith had become progressively more violent and right-leaning in the past few years. She reported that he once wore a shirt commending gunman Kyle Rittenhouse, who, in 2020, shot and killed protestors fighting for an end to police brutality. Rittenhouse was acquitted of the murder of two people under claims of self-defense, and some deem him a “national hero.”

Katherine (Kate) Anstett is a writer for the Vanguard’s Social Justice Desk. She grew up in San Jose, CA and is currently studying English as well as minoring in Human Rights at UC Berkeley. She is particularly interested in LGBTQ+ issues, DEI, gun violence prevention, and disability rights.