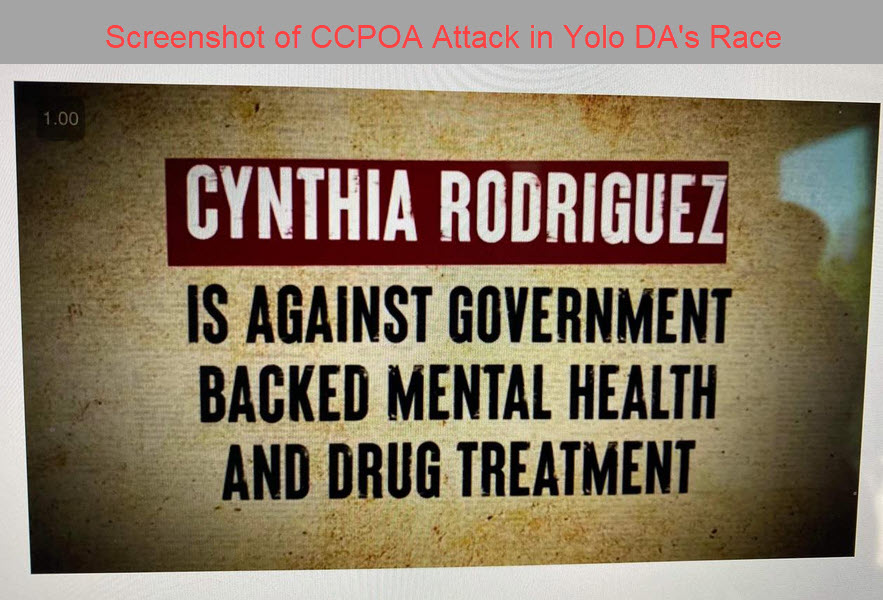 Woodland, CA – Cynthia Rodriquez, candidate for Yolo County District Attorney was attacked in a recent ad paid for by the California Correctional Peace Officers Association claiming she does not support government-backed mental health and drug treatment.

“Not offering rehabilitation until people have to be in jail is against everything we know about successful treatment,” Rodriquez said.

Rodriquez thinks that rehabilitation should be offered in the community before individuals are faced with jail time and that Assemblymember Kevin McCarty’s AB 1928, sponsored by Yolo DA Jeff Reisig, is more money for the courts, not the community.

“We are taking money and instead of dedicating it for the community and using it in jail. We have a habit of taking these funds that are meant to help the community in Yolo County and using them to keep people incarcerated,” Rodriquez said.

Rodriquez is “absolutely for” community programs and community resources being spent in the community, not in the jail.

“To twist that around and try to make it sound like I don’t want to help people with mental health or drug problems,” Rodriquez said. “It is the opposite.”

She said she wants to use the most effective tools to help substance use and mental illness which are in the community and not in jails or prisons.

“All of the experts (noted) on drug treatment and successful management of addiction are done voluntarily on the outside and not in custody,” Rodriquez said.

Rodriquez said Yolo Public Defender Tracie Olson said it best when she said it’s giving the DA all types of tools that are not necessary for this situation.

At the April 12 Yolo County Board of Supervisors (BOS) meeting, Yolo Public Defender Olson said that AB 1928 is very similar to the California Rehabilitation Center (CRC), a prison in Northern California which had a program called the Civil Addict Program (CAP).

“I did not have experts explain to me why this didn’t work but what I did see was clients cycle in and out over this program over and over,” Olson said. “Simply because they were not ready.”

Olson also said this program incentivizes prison sentences because the DA decides what offenses to charge, which to dismiss and whether prison should be offered according to Olson.

“What is perceived to be a great treatment program is only offered with a prison sentence, that’s what we’ll get,” Olson said.

Ian Evans, with the Yolo County Health and Human Services Agency, also shared concerns with AB 1928 at the BOS meeting.

Evans said the bill contains confusing language that allows for either a judge to determine the length of treatment or the treatment providers and that decision should be made by trained professionals, not the courts.

“There are other areas of this bill that are concerning, either because they are contradictory or based on previously debunked approaches to forced or coerced treatment,” Evans said.

Tyler Rinde with the California Association of Alcohol and Drug Treatment Executives, an organization that advocates for high-quality services that treat substance use disorders and co-occurring mental health conditions, opposed AB 1928 at the April 12 BOS meeting.

“We believe there needs to be additional funding for treatment beds, the ability to cite programs expansion, harm reduction, and overdose prevention practices, and a significant investment in sober living environments,” Rinde said at the meeting.

Rinde also laid out why the bill will not be successful.

“First and foremost, coerced and locked addiction care is not effective,” Rinde said.

Rinde said 37 states allow for a family member to petition the court to order people into treatment and a study from the Massachusetts Department of Mental Health found that those committed were more than twice as likely to die from an opioid-related overdose than those who voluntarily went into treatment.

“Addiction care is most successful when an individual has an internal motivation to change,” Rinde said.