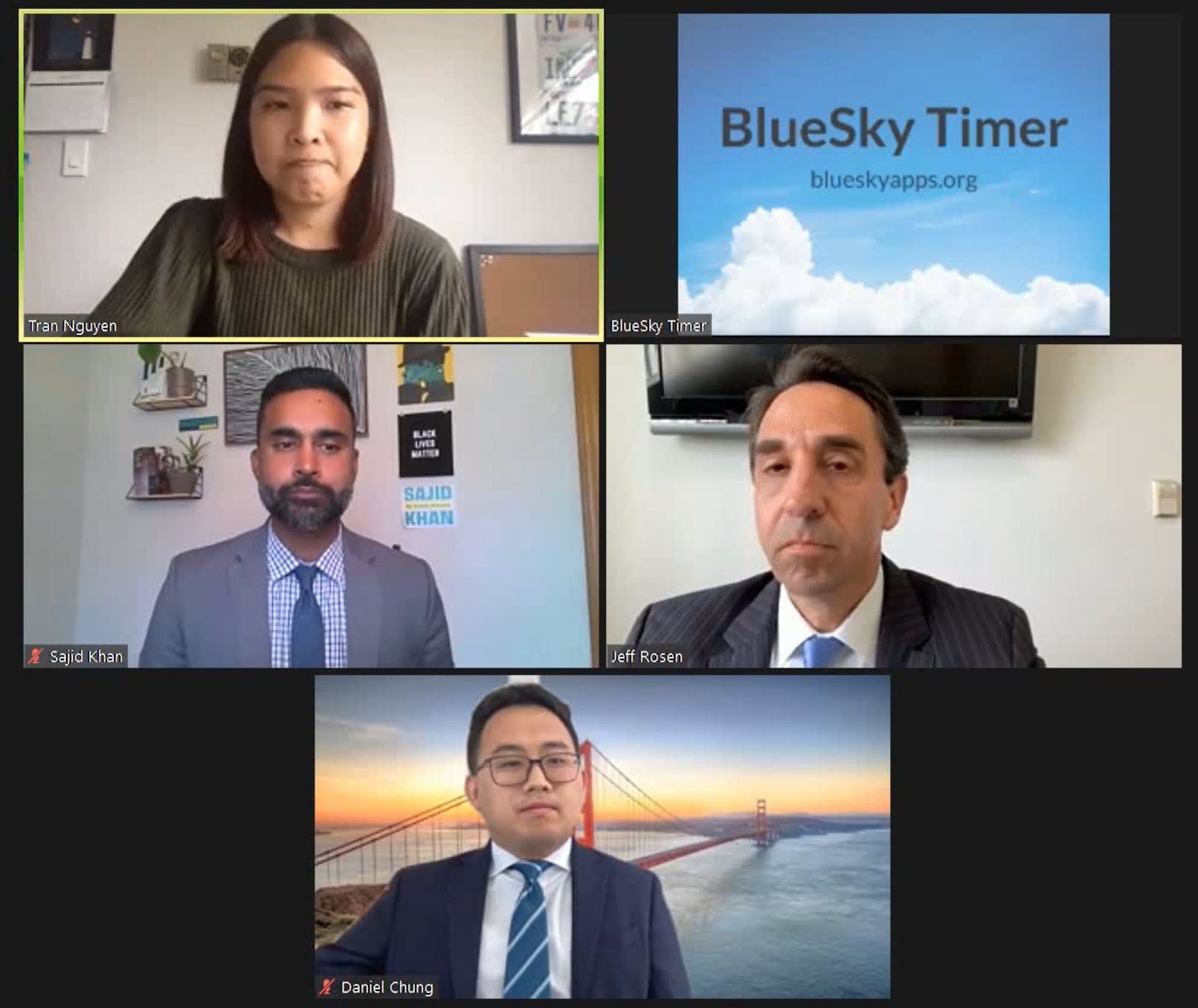 Incumbent Jeff Rosen said, “I’m running for reelection to continue to reduce crime through, uh, prosecuting and holding accountable criminals, as well as through prevention. I’m also running to continue to reduce incarceration.  We’ve reduced incarceration in our county by 50% as part of my leadership as DA, we’ve done that through diversion programs through more mental health, more drug treatment, and through not using cash bail.”

Daniel Chung said, “It is time for change. After 12 years of DA Rosen, I am a career prosecutor who is committed to prosecuting crime. I will fight for public safety, victim rights and systemic changes, and I will enforce laws and pursue balanced reforms as DA. I’m going to prioritize prosecuting repeat serious and violent offenders. The revolving door of criminals that Da Rosen has helped create must stop.”

Sajid Khan said, “For the last 13 and a half years, I’ve served our community as a public defender here in Santa Clara county, fighting for the rights and dignity of our community’s most marginalized people.

“It’s for those reasons that I’m now running for district attorney, because I’m committed to fighting mass incarceration, healing, systemic racism, addressing the root causes of harm in and building a justice system that ensures and protects the dignity and safety of all people here in Santa Clara County, the place that I’ve called home my entire life.”

They were asked what reforms if any would they introduce to the DA’s office.

Daniel Chung: “Well, first is integrity. We can’t have prosecutors in the office who sleep with witnesses, withhold evidence and cause homicide cases to get dismissed. We need to raise the bar again. DA Rosen has brought the bar way down to where defense attorneys are and that’s not acceptable.

Jeff Rosen responded, “Mr. Chung was fired from our office and walked out more than a year ago. So I’m not sure how much knowledge he has about what is happening in the DA’s office since he’s only work there for a few years.”

Sajid Khan stated, “In a recent panel, Mr. Rosen gave his tenure in the last two years of his office an A grade, indicating that there is no room for improvement from Mr. Rosen’s perspective. In my view, as a public defender, having worked in our courts and our jails and our juvenile hall for almost 14 years, there is significant room for significant reform. There is no more cutting around the edges. We need systematic transformation. It starts with juvenile justice and ending the practice of prosecuting children.”

He noted, “I’ve personally represented a child as young as 14 years old who was prosecuted and punished as an adult by our Santa Clara County DA.”

He also spoke of, “Ending coercive plea bargaining practices, where we have a convict-oriented culture from our DA’s office, where people are being forced and coerced into pleading guilty to charges in our courthouse.”  And “introducing police accountability, real police accountability, where we hold police officers accountable when they use excessive force and violate the law in our communities.”

Jeff Rosen responded, “Mr. Khan cites a case where he represented a juvenile a number of years ago—what he neglects to say is that he subsequently sent an email to my office saying we are grateful for your office’s consideration and thoughtfulness in negotiating the charge and sentence which the minor received.”

He also noted that Khan says “he will never prosecute juveniles as adults.  Even George Gascón, the DA in Los Angeles, had to go back and do what I do, which is to look at these on a case-by-case basis, because of the horrific crime that a small number of individuals can do.”

Daniel Chung responded, “DA Rosen likes to emphasize that I was fired.  I was fighting for victims. I was speaking up for victims that he is ignoring. He is on the side of defendants.  He and Sajid want to turn this place into San Francisco, which is, you know, a complete disaster.  You won’t hear from DA Rosen rebuttals to my claims because they’re true.”

Next question: The DA’s office is uniquely positioned to address systemic racism in the justice system. How would you use the tools in this office to address this issue?

Sajid Khan responded, “We saw a movement in our streets in 2020 after the killing of George Floyd that was unlike any other. There was a demand for Black lives to matter. There was a demand for police accountability an end to police brutality and an end to the dehumanization of Black and Brown lives in our community. Mr. Rosen has been in the seat of power for 12 years, and that has left us with a racially discriminatory system where Latino and Black people are overrepresented in felony prosecutions, significantly overrepresented in our juvenile court prosecutions and where people of color are being killed in San Jose without any form of justice or accountability.”

Daniel Chung: “Systemic changes can be brought about by changing the way we charge cases. Under DA Rosen’s leadership. Right now, his senior supervisors tell people to charge cases, to scare defendants, to simply get plea deals. That’s unethical. DA Rosen might bring up how he has a four-point way of charging cases in his office. That’s not true. No one gets training, no one gets calibrated. No one has clear standards about how cases should be charged. And because he doesn’t have a vertically integrated office where prosecutors handle cases from the beginning to the end, it’s a hot potato.”

Jeff Rosen, “Mr. Chung doesn’t know a lot about our office. Given he’s only worked there for a few years.”

He said, “In terms of addressing systemic racism. I supported Propositions 36 and 47, which significantly reduced criminal penalties and disproportionately benefited African American and Latino communities and led to a significant reduction in the number of individuals in jail and prison, specifically African Americans and Latinos.”

He added, “Under my leadership, our jail population has gone down 50%, which has significantly reduced the numbers of African Americans and Latinos in jail.”

Sajid Khan, using a rebuttal noted, “Under Mr. Rosen’s tenure, he continues to prosecute gang enhancements that are rooted in racist gang police tactics. They result in 88% of gang prosecutions being levied upon people of color in our communities. And again, being a, a drastic form of institutional systemic racism in Santa Clara County.”

He charged that, while Rosen talks about diversity in his office, “that’s not true.  All of his assistant District Attorneys, the ones who make the key decisions in his office are white. He compared my hair to a Korean dictator.”

Jeff Rosen responded, “The reason that, um, anyone knows the race of the victims or defendants in our criminal justice system is because I publish and became the first DA in the country to publish a yearly report on the race and demographics of the individuals we prosecute as well as the victims of those crime.”

He added, “What I learned through that and my victims services unit, which works with thousands and thousands of crime victims every year is that the race and socioeconomic status of our criminal defendants and our crime victims is essentially the same.”

Next question: DA Rosen has assisted in several pieces of legislation related to the criminal justice system, so what legislation if any would you champion as DA?

Daniel Chung said, “DA Rosen was a champion of Prop. 47, and we’re seeing the disastrous results of Prop. 47 now.  Property crime is up.  When you go talk to business owners. Now they talk about how their glass windows are broken. They can’t replace it. They’re boarded up. When’s the last time DA Rosen went out into the community and spoke to these business leaders that are suffering every day?”

He said, “I can get behind the spirit of Prop. 47—safe neighborhoods, safe schools, who can’t be behind that? But when you look at the practical realities, when it allows repeat offenders, violent offenders, serious offenders to get away and keep pushing this revolving door that is no longer acceptable in our society.”

Jeff Rosen said that “the legislation that I supported is legislation that has made the punishment for rape the same, whether the perpetrator and the victim were married, or whether the victim was unconscious. In the aftermath of the horrible rape by Stanford student Brock Turner against Chanel Miller. Not only did we obtain a conviction in that case, a very difficult case to obtain a conviction. But when the sentence was much too low, we went out and changed the law so that people would know that the punishment for rape is prison.”

He charged, “Mr. Khan has championed Brock Turner and says that he got a great sentence, and there’s not enough empathy for him.  I really think the empathy there should be for Chanel Miller and all the other victims of rape and sexual assault.”

Sajid Khan responded, “Mr. Rosen has been an opponent to many significant criminal justice reforms in our state that were actually advocated for by many of our own elected leaders here in Santa Clara county. Mr. Rosen fought against SB 1391, which ended practice of prosecuting 14- and 15-year-olds as adults. He fought against the racial justice act, which was sought to remedy systemic racism in our criminal courts. He fought against SB 1437, which changed and modified an outdated and draconian felony murder rule. He fought against Prop. 57, which gave judges the authority to litigate transfer hearings, as opposed to having the unilateral ability to prosecute children resting in the hands of his DA’s office.”

He said, “So we have a Da that has fought against progressive reforms. He’s not been a leader in our state.”

Jeff Rosen, “These are decisions that are made by judges. What we have done in our office is to encourage judges in cases of serious repeat offenders, whether those are repeat property crimes or repeat violent crimes, we’ve encouraged judges to hold those individuals in custody, pretrial.”

Sajid Khan said, “I’ve been serving in this community as a public defender for almost 14 years and have witnessed our current DA’s office advocate for cash bail to be set in so many cases, which has resulted in people being held in our jails. Not because they’re too risky to be released, but because they’re too poor to afford to pay bail and to get out. And it’s resulted in mass incarceration, it’s resulted in systemic racism and has really harmed our communities and harmed communities of color and destabilized them. And so I’m committed to ending the practice of us utilizing cash bail—that doesn’t make our communities safer.”

Daniel Chug responded, “DA Rosen likes to blame judges for pretrial release of serious and violent offenders. Apparently the buck doesn’t stop with him. He is responsible for the release of many of these offenders as well, 12 years ago, when he ran for DA, he said that exercising preemptory challenges against judges is un-American. However, what has ended up happening over the last 12 years is that we have become one of the weakest DA’s offices out there. We have no control in the courts anymore. The prosecutors have no credibility because they charge weak cases to make weak arguments. And don’t stand up for victims. The DA’s office, if judges are making bad decisions, has an absolute responsibility to make sure that we exercise peremptory challenges against them.”

He added, “DA Rosen tried to eliminate bail, which was rejected by the voters. We absolutely need bail so that we have strata and gradations to treat different types of offenders.”