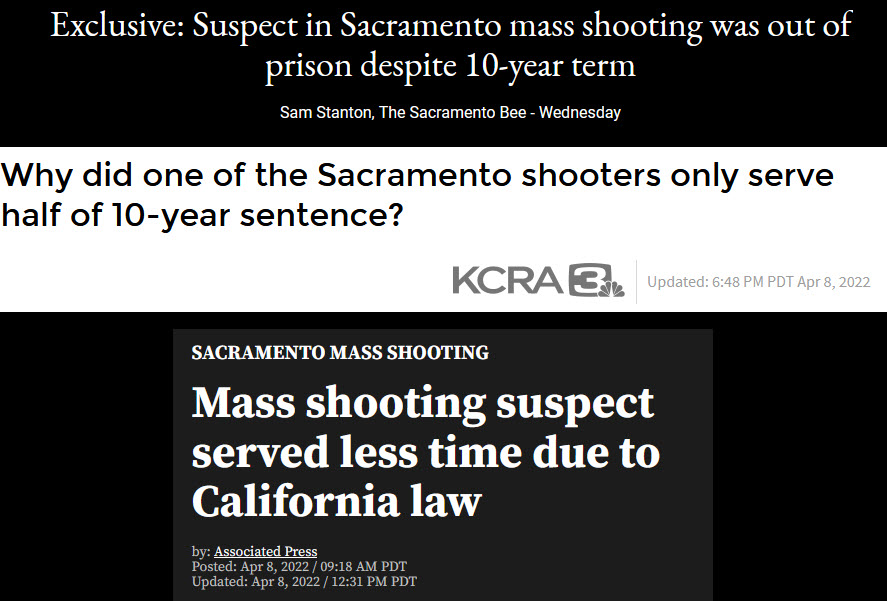 Sacramento, CA – When Troy McAlister was released from custody and ended up committing a horrifying crime killing two people in a hit and run, it became the poster case for what many considered San Francisco DA Chesa Boudin’s lenient policies toward law and order and the backdrop for the recall election that will be held in June.

But when two mass shootings occur in about a month or so in Sacramento, and data shows that crime has increased far faster in Sacramento than in places like San Francisco and Los Angeles with progressive prosecutors, the focus still somehow remains on criminal justice reform policies—rather than the failures of the current system.

We saw this in play this week following a mass shooting last Sunday that killed six.  One of the men arrested—none of whom are charged with actually killing anyone—was Smiley Allen Martin.  He is charged with possession of a machine gun and possession of a firearm by a prohibited person.

He recorded himself on Facebook Live with a handgun before the shooting.

The big story broken by the Sacramento Bee this week is the fact that Martin won early release from a 10-year sentence for domestic violence and assault with great bodily injury over the objections from the Sacramento DA’s office.

This has become a focal point for the media—even though the police have not divulged his role in the shooting and he is only charged with weapons charges.

An article that appeared on Fox 40 authored by the Associated Press reported that Martin was released early due to the new law.  Although not very much early—“Smiley Martin typically would have remained behind bars until at least May after serving a minimum of half his time for his previous arrest in 2017, but prison officials evidently used a very expansive approach to applying lockup time credits to his sentence, said Gregory Totten, chief executive officer of the California District Attorneys Association and a former Ventura County district attorney.”

“They’ve been given very broad authority to early release folks and to give them additional credit and all kinds of considerations for purposes of reducing the length of sentence that somebody serves,” Totten said.

The report notes, “Before Proposition 57, he would have qualified for 20% ‘good time’ credits — meaning he could reduce his time served by one-fifth — but corrections officials used their authority under the ballot measure to bump those to 50%.”

Mayor Darrell Steinberg naturally is one of those upset about his being released despite his record.

“If people have a history of committing violent acts, and they have not shown a propensity or willingness to change, I don’t think they should be out on the streets,” he said this week.

“Because we had so much overcrowding, there was pressure from federal courts and actually the Supreme Court to reduce the prison population,” said Michael Vitiello.  “California was incarcerating people for very, very long periods of time, well past the time we needed for social protection.

Anne Marie Schubert of Sacramento is one of those DAs who has argued that good credits are handed out automatically.

She joined over 40 other DAs last year to oppose the new system.

DA Schubert said in a release, “Allowing the early release of the most dangerous criminals, shortening sentences as much as 50%, impacts crime victims and creates a serious public safety risk.

“Getting out of prison—let’s be honest—for doing nothing,” Schubert said at an August press conference.  “Can you imagine that, thousands of murderers and sex offenders in our prison system, getting out early for doing nothing more than not misbehaving at a time when we see today and pretty much every day on the news that violent crime in this state and in this country is surging.”

But one of the problems here is the same problem we saw with the McAlister case—we see a person released, he has a bad record, and he commits a new crime that has captured public imagination.

The problem is, in both cases the media is only telling one side of the story.  There is no context here.

Crime is going up—at least some crimes and at least right now, during the pandemic.  But as we have noted, that does not mean that criminal justice reform efforts are to blame, even if we can cite early release as a potential factor some of the time.

For one thing, crime is going up more in places where there have not been such reform efforts.

For example, as cited earlier this week, analysis by Third Way showed, “The rate of murders in the US has gone up at an alarming rate. But, despite a media narrative to the contrary, this is a problem that afflicts Republican-run cities and states as much or more than the Democratic bastions.”

In 2020, they found “per capita murder rates were 40% higher in states won by Donald Trump than those won by Joe Biden.”

“Eight of the 10 states with the highest murder rates in 2020 voted for the Republican presidential nominee in every election this century,” they found.

In our recent podcast with Santa Clara University Law Professor David Ball, he talks about what he calls the Peter Parker Problem, namely, “if I let someone out of prison, what happens if he does something bad.”

The one person who might fail if let out on bail or parole.  Ball noted the case of Willie Horton, and “he was one of only two people who failed in the furlough program that Michael Dukakis had in 1987.”

He noted “it was 50 years ago and if there were lots of Willie Hortons, we’d hear someone else’s name besides Willie Horton.”

The point is that the program was highly successful, but it was ended when one person took advantage of it to something horrific, and no one bothered to point out it had a very high success rate.

That leads us to the question—what happens if we attack early release, but data shows most people who are released early cause no problems?  The recidivism rate in California remains quite high, but it is actually slightly lower than it was 10 years ago prior to laws like Prop. 47 and Prop. 57.

Instead of blaming early release, we should be putting in resources to reentry, job training and education programs that allow people who have been formerly incarcerated to integrate back into society and become productive citizens.

3 thoughts on “My View: The Media Already Blames Early Release for the Sacramento Shooting”