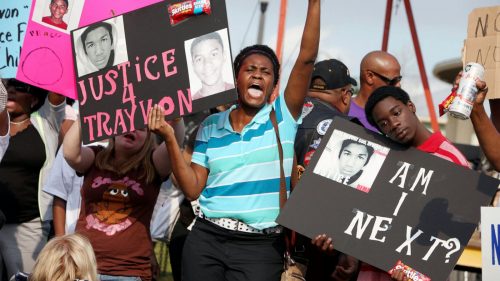 NEW YORK, NY — It has been ten years since the untimely death of Trayvon Martin and yet his passing still echoes a piercing sentiment about racial injustice in America, ABC News reports.

Martin will forever be remembered as the young, 17-year-old gone too soon. His death continues to inspire a national vociferation for justice and accountability.

On the night of Feb. 26, 2012, Trayvon Martin was walking back home from a convenience store, wearing a gray hoodie over his head, when he was gunned down by a self-professed community watchman, according to ABC News.

George Zimmerman (28) called 911 moments before he confronted Martin. He was recorded during the call describing Martin as “suspicious” and “up to no good.”

The use of such language resonates with many Black Americans and people of color, as they often endure similar racial stereotypes and more. This 911 call hit a tender nerve with many people of color who could identify being in a similar situation as Martin, according to ABC News.

Many killings of young Black men did not previously make national news, except in the case of Rodney King’s murder in the early ‘90s. Martin’s death changed that, and with that came to light the multitude of victims of racial violence like Eric Garner, Michael Brown, Ahmaud Arbery, and Breonna Taylor.

However, since Zimmerman was not immediately arrested after shooting Martin, this begged the question of how much the country truly has progressed. After all, voters did elect Barack Obama—and yet Black men are still being killed by police.

The saying “the more things change, the more they stay the same” somehow rings true in this context.

Going back to the night of the crime, emergency dispatchers told Zimmerman not to confront Martin, but he still did anyway. What he did next sparked a new civil rights movement.

The slow timing of Zimmerman’s arrest, as well as his controversial acquittal, sparked the hashtag #BlackLivesMatter.

Martin became the catalyst for the Black Lives Matter movement, a collective movement that snowballed by the time of George Floyd’s death. This spurred protests around the world calling for racial justice and eventually led to reforms in many jurisdictions pertaining to law enforcement.

However, one thing is comparatively different between Floyd and Martin.

What makes the Trayvon Martin story more reprehensible, and perhaps even more tragic, was that he was gunned down by a private citizen, not a police officer.

Furthermore, Zimmerman did not face any accountability. The accused claimed self-defense and was ultimately acquitted due to Florida’s “Stand Your Ground” law which permits citizens to open, carry and legally use deadly force if they feel threatened.

“The Black Lives Matter movement is interested in both cultural change and policy change,” said Deva Woodly in the ABC News article, a professor of politics at the New School for Social Research.

That change has been slowly coming, but looking back ten years, there have been many more people that look like Trayvon Martin gone way too soon at the hands of both private citizens and law enforcement.

The case of Ahmaud Arbery also rings a similar bell, ABC notes, as he was similarly hunted down by private citizens, claiming self-defense. However, the defense claim made by Arbery’s murderers did not work in the Georgia courtroom and they were subsequently convicted for their crime.

The same cannot be said about Trayvon Martin, but his murder opened many Americans’ eyes to the racial injustice, and fear, young Black Americans face every day. We must continue the momentum, culturally and institutionally, to rectify the tragedies commonplace in the land of the free.