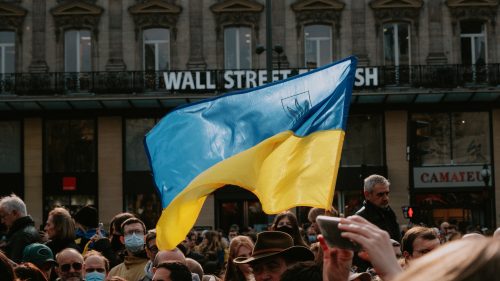 On Feb. 24, 2022, the tension between Russia and Ukraine reached its peak as Russia began its invasion of the country. As a month of war has passed, ongoing peace talks between Russian and Ukrainian officials have continued, with Russia recently claiming to lessen its military advances. This tactic is causing skepticism to rise amongst Ukraine and United States officials who worry that Russia is developing harsher military advances. It is vital for government officials and the public to remain aware of the threatening rhetoric and actions Russia is practicing to destabilize power in Ukraine.

In a report by Reuters, after a peace talk with Moscow and Ukrainian officials, Russian negotiators claimed to decrease military advances. However, despite this, shelling was reported to have struck Kyiv and Chernihiv, the northern region of Ukraine. Writer Natalia Zients adds that “Russians were also shelling nearly all cities…separating Ukrainian government-controlled territory from areas held by Russian-backed separatists.” Clearly, Russia is continuing to use harsh military tactics.

Russia’s military is being ordered to continue the war which is significantly impacting innocent Ukrainian civilians. These Moscow peace talks have not resolved military advances in Ukraine, but have only increased concern for more advanced attacks from Russia.

United States officials have also warned against any “peace” bargains Russia offers to Ukraine. In an article by USA Today, the Pentagon presumes that the Russians are easing their attacks to resupply themselves as attacks are still happening in Kyiv. The writers describe the brutal offensive tactics of Russia as using airstrikes and shelling.

If what the U.S. Department of Defense reports is true, Russia will escalate their invasion with more advances and powerful weapons leading to further death and destruction in Ukraine.

President Joe Biden also claims there is no clear evidence of Russia restraining advances in Kyiv. This skepticism of Russia’s peace bargain is rising amongst all allies of Ukraine including NATO officials. Secretary-General of NATO, Jens Stoltenberg claims, “Russia maintains pressure on Kyiv and other cities, we can expect additional offensive actions bringing more suffering.” Many nations in support of Ukraine are concerned about the further danger that may await the country and are willing to continue to supply weapons for defense.

In a recent report from CNBC, Russia has given control of the Chernoybl nuclear plant back to Ukraine. Writer for the news site, Kevin Breuninger states: “The Russian forces… returned control of the Chernobyl nuclear plant to Ukrainian personnel,” citing a press release made by the International Atomic Energy Agency. Russia’s takeover of the plant was a very dangerous move as it put the whole country in danger— especially considering if any artillery damaged any remaining radioactive structures. This move put the lives of Russian soldiers at risk since they have been exposed to radioactive material.

This power-driven war incited by Russia shows the harsh lengths that the country’s President Vladimir Putin is putting its soldiers and civilians through— risking all of their lives. John Kirby, a spokesperson for the Pentagon confirmed that indications have been seen “that some Russian forces are departing from the Chernobyl plant facility.” He continued, “we gather that they are leaving north to go back again towards Belarus” and indications of their next move “are not completely clear at this time.”

Recent headlines will read that Russia is easing its military advances, but one must read beyond that. It is important to be aware of the current situation in Ukraine because of Russia’s known threats. The war between Russia and Ukraine is one of many that shows how power-hunger officials can kill civilians and destroy their homes to feel dominant.

Share:
Previous : Commentary: We Celebrate the Feat of Jackson Getting to the Supreme Court and Mourn the Loss of an Independent Judiciary
Next : Jury Begins Deliberation in Arson Trial for Homeless Man

One thought on “Student Opinion: Russia Claims to Ease Military Advances in Ukraine but the Public Should Remain Alert”