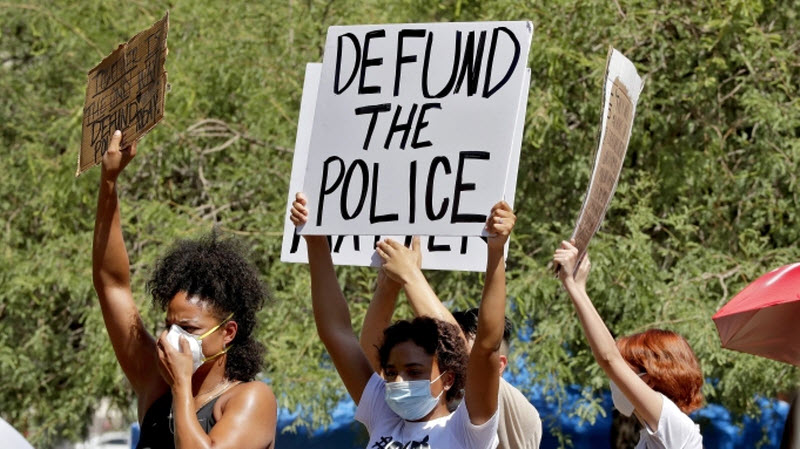 BALTIMORE – A Baltimore-based nonprofit news organization, The Real News Network, recently analyzed hundreds of city budgets nationwide and found that most police services—after grassroots calls to “defund” the police—did not see a major reduction in their budgets, as claimed by Republicans.

The research was in response to an alarming trend of conservative media outlets claiming there was “mass defunding of the police” as a result of George Floyd’s murder, which has now resulted in a dramatic increase in crime everywhere—despite the research proving otherwise.

“(D)efunding the police quickly became a right-wing bogeyman. As cities across the country reconsidered their police budgets, any insufficiently pro-police politician could be accused of wanting to defund,” according to The Real News Network.

“Black Lives Matter, Antifa, the burning precincts and looted Targets would naturally follow. Right–wing publications, politicians, and other outlets accused the ‘defund’ movement of spurring a national crime wave, both directly and by decimating police morale so much that it was affecting hiring,” the news agency added.

Authors Andy Friedman and Mason Youngblood looked at 417 local government budgets and noted significant patterns—that within a five-year period, the budgets of police departments generally stayed the same, from fiscal years 2018 to 2021.

They said that the pandemic brought about a potpourri of stark consequences, and that government budgets were adversely affected because of the loss of tax revenue, and it meant lawmakers made very unconventional decisions to their budgets.

The writers commented that it was a very rare time in the U.S. because defunding the police had become public policy, at least for a moment in Minneapolis and in many other cities.

From there, any talk of “defunding” or “reducing” police departments was met with stiff opposition from Republican reactionaries, they said.

Additionally, many major U.S. cities with large police departments did reconsider their services, but that did not equate to major reductions in funds allocated.

The study found, if there was a reduction, it was certainly after FY2020. They write that “cities allocated about three percent less for police, but did so after the ‘defund’ backlash was in full swing.”

Before the pandemic, it was usually at 30 percent increase in police budgets, on average, and has changed very little. It did see a gradual decrease in proportion to the operating budget, but not enough to proclaim an entire department is being abolished, the study suggested.

“So what about the fights over police funding in cities like Minneapolis and Seattle? While Seattle City Council members initially aimed to halve the Seattle PD budget, the actual decrease was around 11 percent, from $406 million in 2020 to $360 million in 2021. SPD still gets $363 million for the 2022 fiscal year,” the news group noted, citing some examples:

“The Minneapolis City Council initially backed a plan to replace its city police department with a redesigned ‘Department of Public Safety.’(This new department’s intended budget was unclear, but its critics still considered the move a form of defunding.) That support faded, and eventually voters rejected the redesign by a 56 percent to 44 percent margin in a citywide election…Minneapolis PD did take a 14.7 percent cut in 2021 (from $188 million to $160 million), but recovered almost all of it in 2022…Austin reduced its police department’s budget by 32.5% in 2021; then, like Minneapolis, gave it all back in 2022.”

In a Morning Consult/Politico poll, most participants said they were against the “defund the police” movement, at 58 percent.

The authors forcefully inferred the participants believed it led to more crime, but there were more people in that study that supported “redirecting funds to community development programs,” at 43 percent versus 45 percent who opposed it.

Larger cities, such as Seattle, Philadelphia and Los Angeles, are reforming in that direction, the study showed, noting the “defund the police” movement has transformed from a conversation between law enforcement and lawmakers, to reforming public policy to avoid any minor crime offenders from being “accidently” killed by the police.