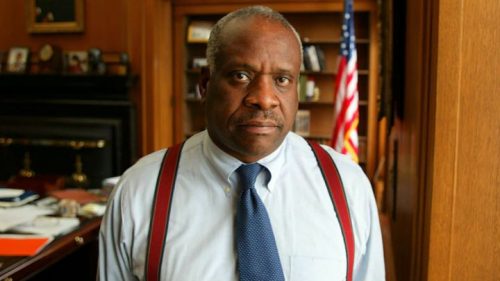 WASHINGTON – Many Democrats are calling on Justice Thomas to recuse himself from Trump-related cases or resign from the Supreme Court altogether. Text messages between Ginni Thomas, the wife of sitting Supreme Court Justice Clarence Thomas, and Former Trump Chief of Staff Mark Meadows were made public by the January 6th committee.

Mrs. Thomas sent the texts to Mr. Meadows after it was clear that now President Joe Biden had won the 2020 election – urging Meadows to “help the President (Trump) stand firm” in the wake of a “stolen election.” Mrs. Thomas peddled common conspiracy theories espoused by Trump loyalists in the days and weeks preceding the January 6th attack on the United States Capitol. Rioters shouted much of the same language in the texts as they broke into the Capitol.

Mrs. Thomas’s involvement in the movement to overturn the results of an election deemed the “most secure in history” by Federal election officials (many of whom were appointed by Former President Trump) has raised questions about whether her husband, Justice Thomas, can be a neutral arbiter in cases that come before the Supreme Court regarding the events of January 6th.

A group of House and Senate Democrats sent a letter to Chief Justice Roberts and Justice Thomas advising Justice Thomas to recuse himself from cases involving the January 6th insurrection. The letter references the language of U.S.C. § 455, which requires members of the Federal Courts to recuse themselves from cases “in which (their) impartiality might reasonably be questioned.”

Court watchers are now seeing Justice Thomas’ solo dissent in Trump v. Thompson, a case decided in January 2022, in a new light. In Thompson, the court held that federal investigators could not be denied access to Trump administration communications in the days leading up to January 6th. Even Justice Alito and Justice Gorsuch, both ultra-conservative members of the bench, did not accept the flimsy executive privilege argument proposed by the Trump legal team. Justice Thomas had a clear conflict of interest; his wife sent some of the messages the Trump administration tried to prevent the release of to the public– clear grounds for recusal.

Other justices have recused themselves from cases where they arguably have less of a conflict of interest. For example, Justice Breyer has recused himself from many cases that his brother, who serves as a district judge in California, issued a ruling. Justice Kagan has recused herself from cases that she worked on during her time as the former solicitor general in the Obama administration.

Justice Thomas’ refusal to recuse himself raises essential questions regarding Supreme Court ethics. Justice Thomas is not alone in not recusing himself when a conflict of interest is apparent. Unfortunately, the Supreme Court lacks an enforceable ethics code. While many bills have been introduced in Congress to bolster Supreme Court ethics, many legal experts fear the measures could be ruled unconstitutional by the very justices whose behavior the legislation would attempt to regulate. Legal professionals and many Congressional members believe the easiest solution would be for the Supreme Court to craft ethics rules for themselves. Chief Justice Roberts, who has been vocal about the importance of the Supreme Court maintaining its legitimacy, would be the most likely figure to spearhead such an effort. The Supreme Court requires legitimacy to operate effectively. As Alexander Hamilton put it, “the judicial branch may truly be said to have neither force nor will, but merely judgment.” If the American people do not trust that Supreme Court decisions are fair and impartial, it could spell serious trouble for American constitutionalism.

The Supreme Court faces a legitimacy problem. A strong ethical code to ensure impartiality could rebuild trust in the highest court in the land.