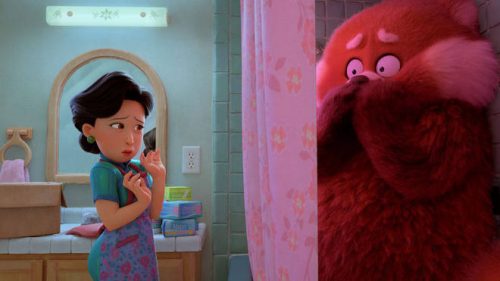 How early should someone talk about periods? My mother got her period at nine years old. It was something she knew nearly nothing about, thanks to tight-lipped attitudes towards the subject. However times are changing, and today’s media is finally introducing young adult viewers to this natural biological process.

“Turning Red” is Pixar’s latest film released on Disney+ on March 11th. It tells the story of a young girl’s transition into womanhood through the inspired medium of a giant red panda. Beyond comedically telling the story of this teenager’s furry secret, Pixar’s newest release prompted meaningful discussion about how to navigate puberty.

The movie additionally sparked debate over the appropriateness of including direct references to periods in a kids’ movie. Thirteen-year-old Mei Lee is terrified to discover her body is changing, but her mother Ming is ready to help her face the challenges of puberty… or so she thinks. The iconic scene of Ming Lee’s arms full of ibuprofen, sanitary pads, and a hot water bottle (as father Jin Lee subtly makes himself scarce) is reminiscent of many young women’s introductions to their monthly cycle.

However, Mei does not get her period. Instead, she turns into a giant red panda. Go figure.

Before the following scenes grapple with this even more unexpected bodily change, there is one moment worth pausing on: the aforementioned pad scene. It addresses the question on the minds of an older, more knowledgeable audience — if this is indeed her first period? — while providing an opportunity to introduce the topic to younger viewers.

As my sex education at a fifth grade level consisted of the boys and girls in separate rooms watching grainy VHS tapes on “the birds and the bees,” I am all too aware that a more organic introduction to the conversation of puberty would be beneficial to both girls and boys. Without hitting you over the head with a tampon, the brief bathroom scene clues viewers in to what the “magical puberty” represents both in and out of the movie.

As director Domee Shi and the makers of the film explain, feeling uncomfortable in your changing body— not to mention with new smells, unexpected hair, and suffering tidal waves of strong emotions— perfectly personifies puberty into a panda. “Embrace the Panda: Making Turning Red” is a feature documentary that gives a behind-the-scenes exploration of the all-women team’s own personal relationships with the characters.

The documentary touches on their own awkward teenage phases, relationships with their mothers, and more recent transitions and experiences as mothers themselves. For its explanation of the “magical puberty” symbolism and more, the documentary is more than worth the watch.

Notably, the film does not actually refer to any menstruation terms by name. Puberty is wholly symbolized through the giant panda, with a well-suited lack of grace. It is the story of the trials and tribulations of any typical thirteen-year-old – which just so happen to include bodily changes like getting your period (or in poor Mei’s case, turning into a bright red, furry animal).

In the 1980s, one researcher found the average age a girl starts puberty is between eight and ten years old, roughly between third and fifth grade. Before this, the age was thought to be closer to eleven years old. Of course, every person’s body is different, and earlier or later puberty depends on a number of factors ranging from genetics to social stressors. Given this, controversy over the movie’s inappropriateness for children ignores just how well-suited the movie is for its target audience, to whom periods could become relevant any day.

While a film about middle schoolers should be warning enough that topics like crushes on boy bands, friend group drama, and rebellion against parents are all fair game, somehow it is the nod towards a natural bodily function that provoked bad reviews. Beyond the glaring fact that this is something about a quarter of the world’s population deals with monthly, says UNICEF, it really is never too early to tell your kids about periods. For those who will eventually get them, it is a considerate heads-up at least, and a crucial discussion of a life-altering change at most.

Even for those who will not get a period themself, it is an important conversation to have to fight stigmatized attitudes and health concerns. The lack of education on periods for both boys and girls is not only disappointing, it is dangerous. For instance, it can lead to poor menstrual hygiene which “can pose health risks,” says UNICEF in an article about the basics of periods.

A limited knowledge of the menstrual cycle is ignorant of how far-reaching associated problems can be; a lack of clean water or sanitary supplies or further struggles for those with special needs or disabilities who menstruate are social, political, and global problems. This is not simply a women’s issue.

Thanks to my close relationship with my mom, I knew what my period was when I got it. We actually watched this movie together, unknowing of how much we could empathize with it. Additionally, my mother’s own relationship with my grandmother— an immigrant from Ireland— parallels some of the cultural aspects that play a role between the relationships in “Turning Red.”

Ming Lee’s reaction to her daughter’s change was to immediately solve what she saw as a problem, instead of listening to her daughter’s feelings. While Mei initially follows suit, she begins to realize that this emotionally powerful animal is a side of herself she may not want to keep behind closed doors.

Flagging periods as a taboo topic is only the tip of the iceberg in “Turning Red,” however. This closed-lip mentality permeates into Mei’s bottled-up emotions regarding her crushes, friendships, and daily frustrations. By teaching children to avoid conversations about periods, we teach them to avoid conversations about anything else that might seem confusing and scary at first. Instead, they should be encouraged to ask questions and seek support or guidance when they need it.

I wish I had a movie like “Turning Red” when I was growing up. I can imagine parents explaining to kids what’s going on by using “Turning Red:” asking if they remember that scene when Mei’s mom brings her supplies in the bathroom to explain why a sibling is having a difficult week. Young viewers can see that while Mei is emotional and clearly grappling with what is going on, it is something completely natural, normal, and nothing to worry about.

Shelved next to “The Body Book For Girls” and “Are You There, God? It’s Me Margaret,” “Turning Red” is a new addition to the arsenal against surprise period attacks. By tossing aside the taboo connotations and no longer shying away from starting the period conversation, we too can prevent another “Carrie” catastrophe– and most importantly, just be there for our kids.

Share:
Previous : My View: The Media Already Blames Early Release for the Sacramento Shooting
Next : Following a No Contest Plea, Judge Grants Brief Release so Defendant Can See His Children

One thought on “‘Turning Red’ Sparks a Valuable Conversation. Period.”