DAVIS, CA – On May 12, 2022, I spoke with a campaign coordinator for Yes on Measure H, Evan Cragin, who graduated from UC Davis last winter and has been active in Davis politics during his time here.

What do you do on a day to day basis as a campaign coordinator?

“Every day is pretty different. I’m lucky in that I get to choose my own hours. Most days I do an assortment of jobs, like coordinating events, dropping lawn signs, etc. Most days, though, I just knock on doors in Davis residential areas. I’ll get a turf of over 100 people and between 4 and sunset I’ll be knocking doors constantly. A lot of people don’t know what’s on the ballot or what Measure H even is. Often I’m informing people about what the measure itself is about.”

How did you arrive at a campaign coordinator position? How has the experience been so far?

“I was involved in the Measure B campaign in a volunteer sense. When it was officially known DiSC was gonna be back on the ballot, I got a call in late December from people on the campaign who asked if I’d want to work for them in a paid position. I was overjoyed because I was planning on spending hours on it regardless. I think they’ve really utilized students well for the campaign. They run on student issues and really listen. Students can gain resume building skills and get a little extra money working on the campaign, and I’m really happy I can be a part of it.”

Did you work on the DiSC 2020 campaign or are you only recently involved?

“I volunteered about twice for the 2020 campaign, but I was a big supporter. I didn’t work and wasn’t paid, I was just volunteering.”

If so, how has the campaign changed in terms of the lifting of COVID restrictions?

“In 2020, I was on the executive board of Davis College Democrats, and back then it was called Measure B. We officially endorsed Measure B. I was in support as a Davis College Democrat and in support personally. When COVID was at its peak, and all the students were out of Davis, it failed by around 630 votes. With all the students out of town it had an unfair disadvantage. This time around I’m looking a lot more positively. Students here have been big supporters. We have the endorsements of Davis College Democrats, ASUCD, and several other student run organizations. The campaign has swung 100% back in person.”

Have you had any distinct experiences or worked with anyone unique that changed your perspective on an issue while working on the campaign?

“You’ll find me at the farmers market most Wednesdays and Saturdays [tabling for Measure H.] A lot of the conversations I have with young people and even young family types, anywhere from 18 to 40, housing is such an important issue. I think everyone who has moved to Davis has recognized the need for more housing. I’ve had a lot of conversations with people about how hard it is to find a place they can afford on a college budget. It’s ridiculous to me. Davis has lagged in its building of housing, which may be attributed to the 1% growth gap or other low density related issues. People get emotional over how hard it can be. I have a friend who commuted from the east bay because he couldn’t find affordable housing in time. There’s no reason to have a vacancy rate as low as we do.”

Why are you personally passionate about Measure H passing?

“I know people in the past in Davis have fought for housing and good paying jobs, especially college students. These are the important things to us for when we finish and graduate. I’m a recent UC Davis graduate, and the issue of housing is just so important to me. This will be one of the biggest housing projects in Davis. I believe it will be one of the biggest affordable housing projects in the history of Davis as well. Working and fighting for housing and jobs is such an important thing to do for students and people in a college town like Davis. We love this city, and we want to make sure there’s lots of opportunities for all.”

One of the main prospects of DiSC is retaining talent in Davis. As a recent UC Davis graduate, what does talent retention mean for you?

“There’s a reason so many of our elected officials support this. It’s important to keep smart minds, good ideas, and good development like manufacturing and research from UC Davis stay in Davis. At the moment we’re struggling to not have brain drain among the younger population. It’s hard for people in Davis to keep a professional job. I’m not in STEM, so I personally won’t get as much of the benefit as someone in it would, but it’s still important to keep good jobs in a university town. A lot of other college towns in California have managed to do things similar to DiSC. They keep a facility for researchers and developers, which Davis has largely nothing like. Especially a truly sustainable facility. We have the potential to do better.”

How do you converse with people who oppose Measure H?

“A lot of people were concerned about traffic, and the 2022 version addressed concerns. With the shrinking of it, a lot of people seem relieved. A lot of people also seem relieved that Mace is being redeveloped. Many East Davis residents worry about whether they can get onto the freeway during rush hour, so this is an important factor. An independent study found when Mace is redeveloped it will actually alleviate traffic by about three minutes. A lot of people have their nerves calmed when hearing about the alleviation.”

How has growing in Berkeley, a city often in the news for housing related issues, informed your views and actions on housing?

“Not much has changed to be honest. However, voters in Davis are very well informed. Davis stands out in terms of how many people know the politics of the city. Same goes for Berkeley, but I think Davis may have the edge. Both are college towns that have struggled with housing for decades. Any housing can be contentious in either city. I’m glad Davis doesn’t have quite the pricing problem yet. Berkeley and Sacramento have made big strides in changing local zoning. I hope that comes to Davis next.”

Do you plan on continuing to live in Davis and will you continue to keep track of DiSC if so?

“I would love to live in Davis, but I’m looking for an affordable place. There’s a reality that I may have to move to Sacramento or West Sacramento. People before me at Davis have fought for other housing projects. I would like to stay so the future generation doesn’t have to deal with the current issues. Measure H can be a good asset in that. It’s also imperative that the public is involved after DiSC’s potential passing. We have to hold developers accountable to what they agreed to. However, Measure H has codified lots of the provisions of DiSC. Much of the project is legally bound to what they agreed to in its potential passing. The Mace Blvd traffic reconstruction will happen before the project is even built as well. I’ll always fight for housing and keeping our elected officials accountable” 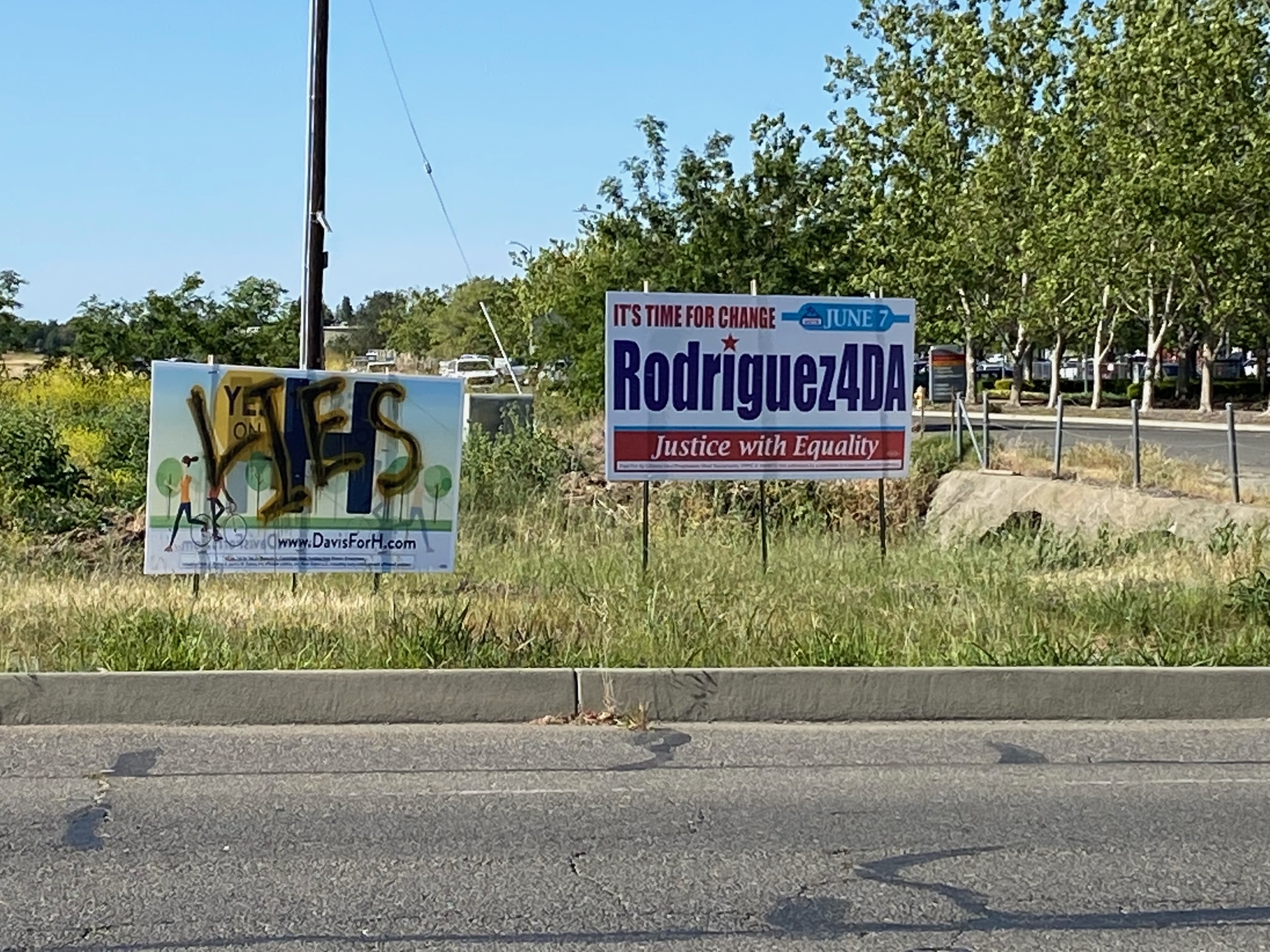 “Today I noticed driving down Covell, someone spray painted over the Yes on H signs. There’s a lot of misleading information that sparked this. I wish politics could stay a little more civil.”

26 thoughts on “A Conversation with a Yes on H Campaign Coordinator: Evan Cragin”