San Francisco, CA – Ahead of a Police Commission meeting set for Wednesday night, a coalition of leaders called for an end to racially biased traffic stops, also known as “driving, bicycling, or walking while Black or brown” or “pretext stops,” during a virtual press conference.

The San Francisco Police Department’s stop and search data were discussed at a Board of Supervisors meeting on March 22. The numbers are stark: the SFPD continues to stop, search, and use force against Black people in San Francisco at a far higher rate than white people. Last year, Black people, as compared to white people, were almost six times more likely to be stopped, ten times more likely to be searched, and 12

times more likely to be subject to the use of force.

Black San Franciscans make up less than 5% of the population of San Francisco but account for 27 percent of all stops and 37 percent of all searches. Other jurisdictions have already taken initial or significant steps toward banning pretext stops, including Cambridge, MA; Montgomery County, MD; Berkeley and Los Angeles; Minneapolis and Ramsey County, MN; Philadelphia, PA; Virginia; and Washington, D.C.

Brian Cox of the San Francisco Public Defender’s office said while the step taken by the Police Commission is important, “We must push for an even more comprehensive end to the use of all pretexts and limit what officers can do after they perform any traffic stop.

“The data show that SPD continues to stop and search people of color at disproportionate rates,” he said.  “This practice of pretext stops is a tool that police departments use here and across the country. They’ve used it for decades. Since the Supreme court said it was legal, we can, and we should do better.”

He noted, “Other jurisdictions are taking on the same fight because they also recognize the urgency—Philadelphia, Berkeley, Los Angeles, Minneapolis, and Washington DC to name a few.” 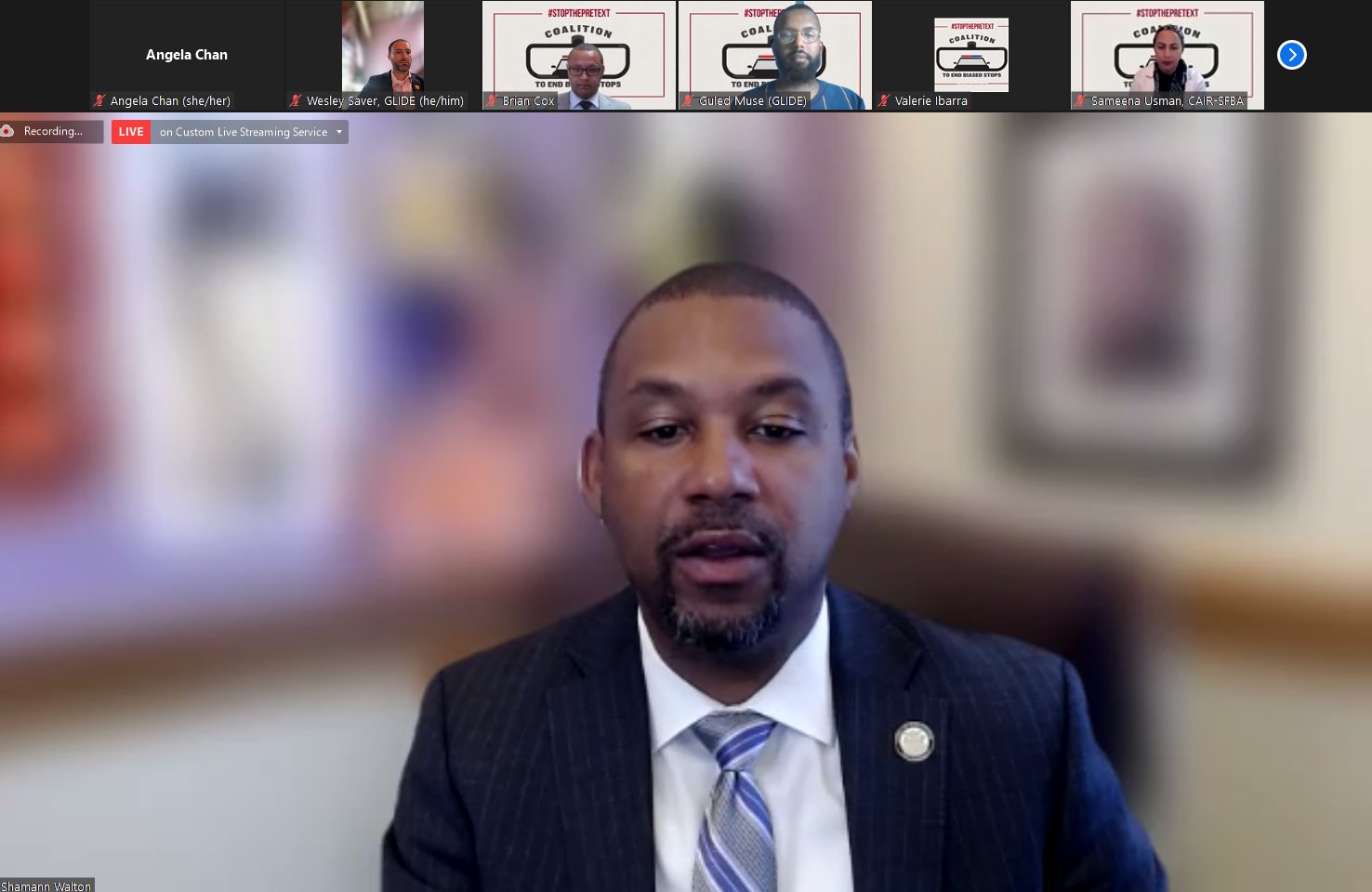 Board President Shamann Walton noted that Matt v. Ohio in 1961 by the US Supreme Court “ruled that all evidence obtained by searches and seizures in violation of the constitution is by that same authority inadmissible in state court. And I would’ve thought that that decision would end the continued practice of racial profiling and pretext stops—it hasn’t.”

He said that this “has caused major damage and distrust between law enforcement in the community.”

“My friends and I were berated by officers only to be let go after being harassed, pulled over only for driving while Black and being young,” Walton said.  “We need to stop immediately. They’re terrifying, extremely traumatizing. And it’s unfortunate that this has been the status quo for Black males and Brown males, and it’s not normal. And it is very unacceptable.”

She said that they have been writing letters for years to no avail.

District One Supervisor Connie Chan added, “We know that pretext stops are not just racial harassment, pretext stops can be often are lethal, lethal to those who are impacted in the situations.”

Sameena Usman, Senior Government Relations Coordinator for the Council on American-Islamic Relations-SFBA, said, “Pretext stops are an excuse to pull people over for simple things such as an item hanging from a rearview mirror or tinted windows, and question, search, and even detain people. They do not help public safety and they disproportionately target communities of color, especially Black people.” 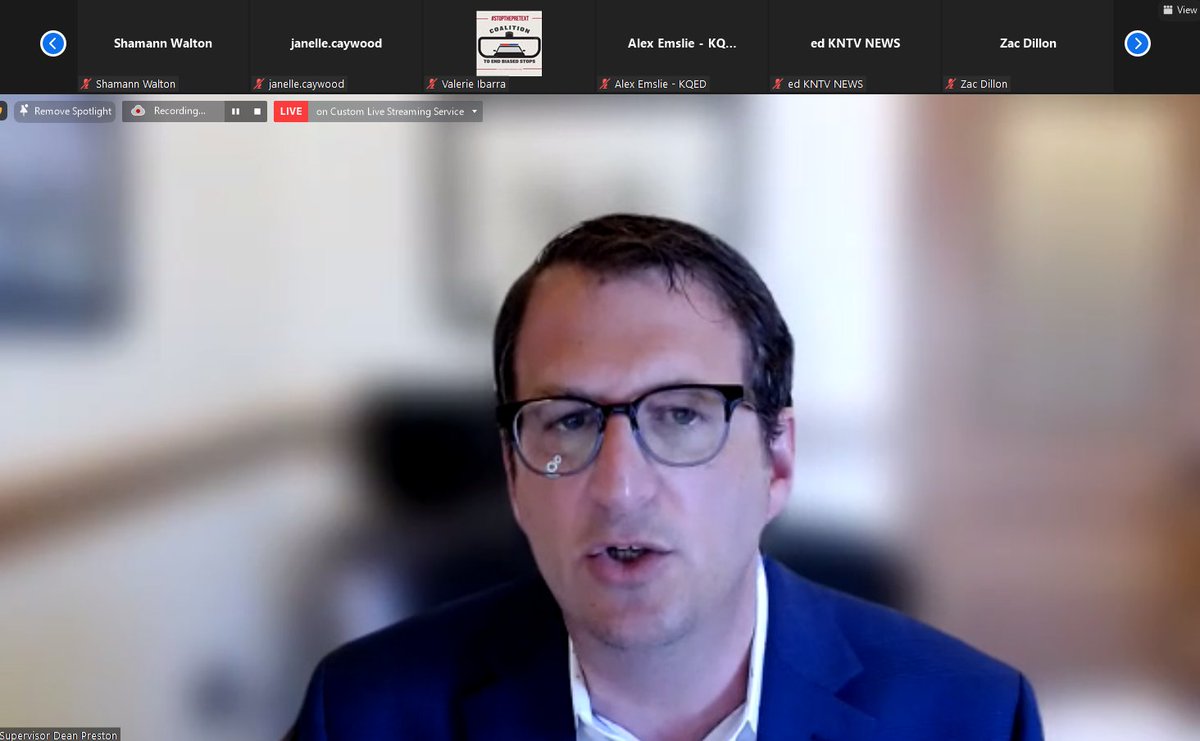 Dean Preston, Supervisor in San Francisco, noted that his office has tried to focus on results and outcomes, including, in his first year, banning knee and neck restraints that the police used to kill George Floyd.

He said, “I want to highlight that really pretext stops have long provided the legal loophole for racial profiling and harassment of certain communities.”

Preston said, “We’ve seen this effect play out in our police interactions and our jail data.  There’s absolutely no reason that this has to continue.”

He added that “if our city is serious about addressing racism in policing, we, we just have to do everything in our power to ban pretext stops.”

Claire Mobley, a senior community organizer at the San Francisco Bicycle Coalition, was born and raised in the Tenderloin.

She said that “for far too long, we have relied on police to enforce traffic laws. While data has shown us their ineffectiveness in preventing or stopping traffic collisions. We know the communities most affected by this are low-income Black communities and communities of color who are already overpoliced as it is.”

She said, “That is why at the height of the civil unrest in 2020, we partnered with the Tenderloin community benefit district on a campaign to identify community-based alternatives to police for traffic enforcement.” 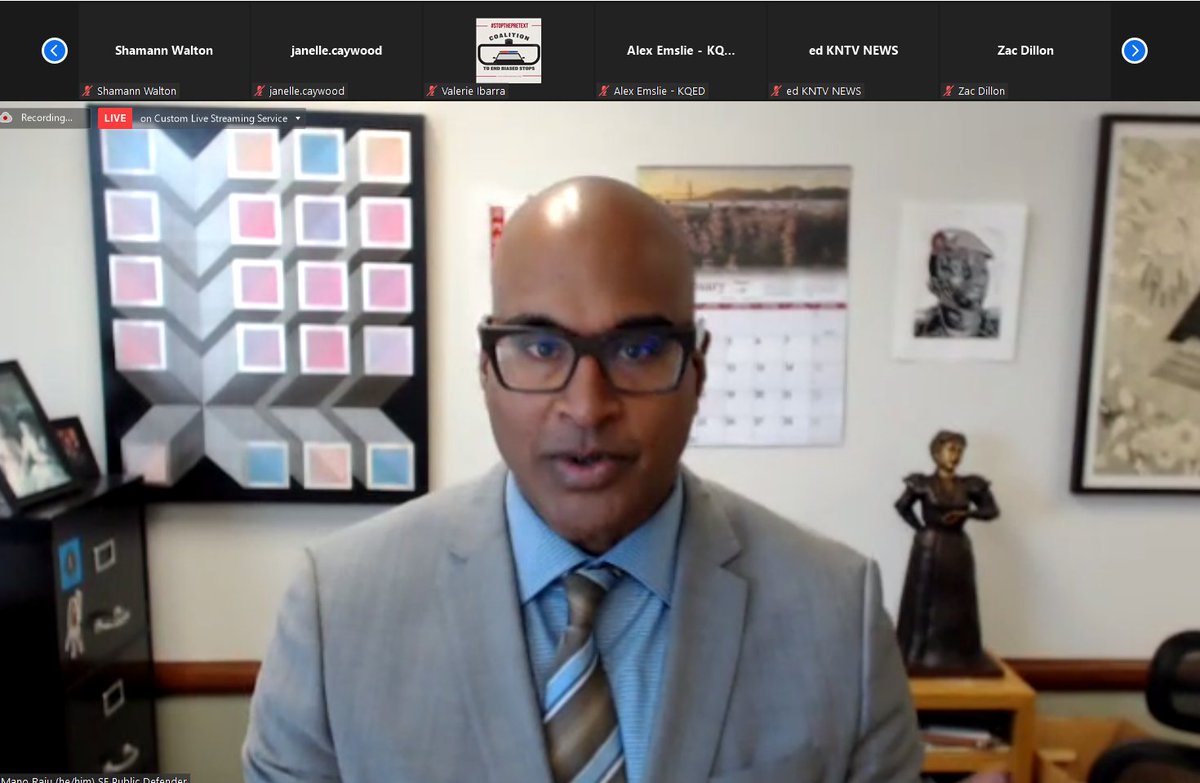 Mano Raju, the San Francisco Public Defender said “being a person of color while driving bicycling or walking should not, should not make you a target. And we know from what we see with our own eyes here in this city, and from press headlines around the country, that this is real.”

He continued, saying that “because courts have sanctioned this practice, we see it reflecting the people we represent every day, and that has taken an economic toll. It takes a physical toll. It takes a psychological toll and it takes an—and it impacts people. Intergenerationally, pretext stops are not making our streets safer for those who walk, bike or drive, they’re fishing expeditions to prolong the stop, to investigate something unrelated to the stop. And these are biased. They harm community relations and they instill fear and terror in overly policed communities.”

Raju said, “Time and again we have seen how racially-biased pretext stops have led to police violence against Black and brown community members across the country. We have a chance now in San Francisco to protect people’s rights and lives by ending these unnecessary law enforcement interactions. We are grateful to the large number of city officials and community leaders who support the coalition’s comprehensive vision for ending all pretext stops.”

Avi Frey, Deputy Director, Criminal Justice Program, ACLU of Northern California, said, “Pretext stops do nothing for public safety and routinely escalate into violence against Black and brown people. Their use is a constant reminder that the freedoms and lives of people of color are at the mercy of a government that views them as suspect. It is past time to abolish this tool of racial oppression.”