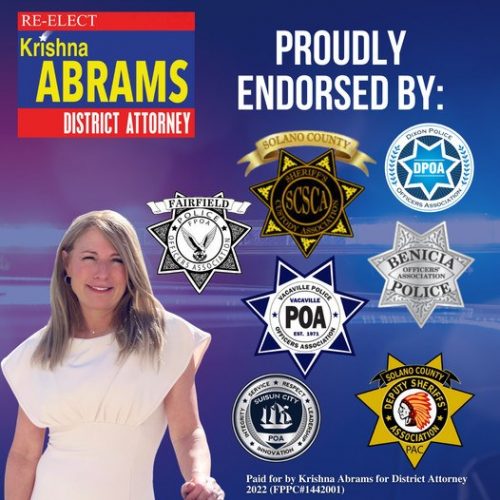 Martinez, CA – One of the big debates these days is the extent to which support of law enforcement and in particular police unions has become a barrier to reform and police accountability.

Here we are two years after the death of George Floyd, and President Biden this week was forced to issue an executive order on police reform, many called long overdue.  That was of necessity because the George Floyd Justice in Policing Act stalled in the Senate—in part because of opposition from police unions and law enforcement groups to real reform.

District attorneys are right on the front door of police reform efforts, because they have the power to prosecute and the power to stall prosecution of police officers who have crossed the line from lawful use of force to police killings.

In recent years we have seen Sacramento DA Anne Marie Schubert fail to prosecute officers in killings of people like Joseph Mann, Dazio Flenaugh and, perhaps most notably, Stephon Clark.

At the same time, Vallejo Police have killed a string of unarmed Black men like Willie McCoy, who was sleeping in his car when police shot and killed him, and others like Sean Monterrosa who was surrendering to police on his knese, armed only with a hammer when cops opened fire.

And yet, DA Krishna Abrams has not prosecuted even one cop for the unlawful use of force or manslaughter or murder for any of these strings of police killings.

It should be no surprise then that Abrams is backed heavily by law enforcement.  On a recent graphic, she proudly displays support from just about all of the major POAs in her county, plus the Deputy Sheriff’s Association.

In other races where we have raised this issue, the push back has always been—is that a problem?

In Yolo County, DA Reisig does not shy away from the relationship either.

Reisig at the forum pointed out, “I am the chief law enforcement officer. That means every single day, my job is to work in collaboration with the law enforcement officers around the county. Imagine if I had a terrible relationship or if I pronounced on day one, I’m going prosecute every one of you, it’s not going to go very well, i.e. San Francisco, Los Angeles.”

He added, “I have very strong relationships with police officers.”

When support is tied to specific policies and the failure to hold police accountable, it becomes a problem.  That’s what critics note about Abrams.

Abrams, if you recall, refused to even investigate the killing of Sean Monterrosa by Vallejo police.

AG Bonta was critical of the DA’s office in Solano County, noting, “What has happened is there has been inaction.” He said, “This case deserves action.

In a statement released by his office, it noted, “At a moment when building trust between law enforcement and the communities they serve is more important than ever, the District Attorney’s failure to act only serves to create more obfuscation and distrust in our justice system.”

Monterrosa was fatally shot by a Vallejo Police Department officer on June 2, 2020.

“Without accountability, there is no justice,” said Bonta.

Abrams promptly fired back at the AG, accusing the AG of “[p]laying politics with one of the most critical and divisive issues in our communities today—officer involved fatalities.

“It is beyond disappointing that we can’t trust the statement of the Attorney General,” she said.

Civil Rights Attorney Melissa Nold told the Vanguard in a recent phone interview that she first encountered Abrams on the Angel Ramos case.  Ramos was shot and killed in 2017 by Vallejo Police Officer Zachary Jacobsen, and last December a federal judge ruled against summary judgment to allow a lawsuit to move forward against the city of Vallejo.

She said when Abrams issued the charging decision, “I read it and I was just like, what?  This is crazy, Angel Ramos was unarmed.”

She said, “The officer claimed he had a knife. Everyone else there says he was unarmed and it was a fist fight. The cop says, told the story. that just couldn’t be true. It just wasn’t true. Didn’t happen.”

Nold said she started hearing stories about Abrams dating local cops and she is now married to a leader in the sheriff’s department.

When Willie McCoy happened in just in 2019, it was the latest in a string of such killings.

Nold described that Abrams reached out and wanted to meet with the family.

“We were like, okay, we’re making some progress,” Nold said.  “We went up with the McCoy family and she basically brought us up to the DA’s office just to tell us that she wouldn’t expect to get any kind of report from Vallejo for at least a year.  She couldn’t do anything.  Basically, she just brought us up there because there’d been a lot national media attention.”

On the Monterrosa case, she attempted multiple times to recuse herself.  “At that point, she said it was in response to the public perception that she was biased, which to me was bizarre because you either are biased or you aren’t.”

Nold noted, “When there’s another officer involved shooting in this county, she going to be in a weird position because she’s still married to the sheriff’s right hand man.”

Nold argued, “I just think it’s really problematic to, from an ethical standpoint, from like a common sense standpoint, to marry a lieutenant from a local agency that you are essentially overseeing, to marry them while you are in office.”

She said “that’s a bias that she can’t resolve.”

Compounding that is the more ordinary problem of accepting money from the POA when you have to investigate an officer.

She noted another case that’s about ready to go to trial, where a 16-year-old girl was killed by police.

This issue remains a big question.  DAs and DA candidates in the region, people like Anne Marie Schubert, Thien Ho, Jeff Reisig, Krishna Abrams and Mary Knox have all taken large quantities of money from POAs as they try to win or retain office where they will make charging decisions over police officers involved in shootings and other forms of misconduct.

In many cases, they not only don’t see a problem with it, they see it as a point of pride.