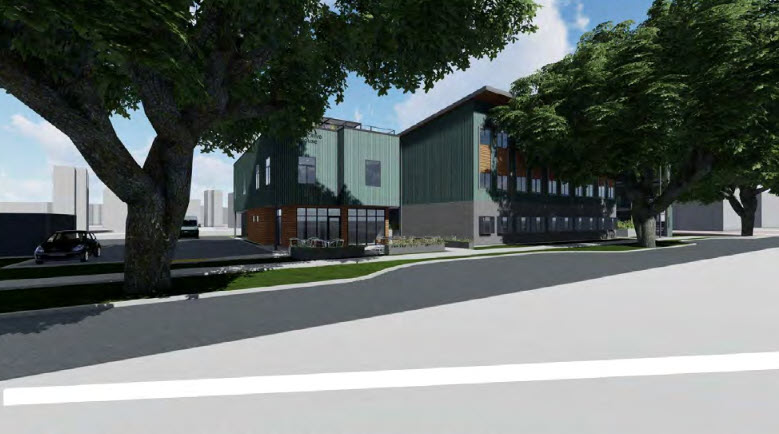 Davis, CA – It was a small, unique and, some would say, innovative or unique project designed for workforce housing and people without cars.  In a town where we hear loud complaints about large, driving-centric, commuter-based projects, this one would have almost no parking on site.

However, that has been a source of contention as well—with concerns from some including neighbors that no on-site parking would mean people would store or stash their cars elsewhere.  But council on Tuesday approved the project and looked into the creation of a parking district—moreover, the applicant indicated that no cars would be written into the lease.

A caller living in the Davis Mobile Estates said that the folks living there “are very against this project.”  He said, “Traffic is already terrible here, especially when you have In and Out Burger.  It’s very difficult to get (through) the intersection of Richards and Olive.  Sometimes it takes two or three times, and the idea that you won’t be any parking – people will be parking everywhere and they will be coming into Davis Mobile Estates and taking spaces that they should not be taking, obviously.”

The applicant had earlier explained that the reason they could go with such a unique set up is they felt the close proximity to downtown would allow some people to be able to live without cars and use alternative forms of transportation such as buses, bikes, and car share rather than privately owned vehicles.

They said that they believed in a town of 70,000, they felt they could find 47 to 50 people or so that did not need cars but wanted middle range affordable housing close to downtown and the university.

It was clarified that all of the market rate units would be affordable for moderate income residents.

Councilmember Josh Chapman said, “I appreciate the willingness to try something new around parking.  Olive Drive right now is severely impacted with overflow parking for Ryder – I hear complaints, not even exaggerating from residents and from business owners… around overflow parking and how it’s coming out on Olive Drive.”

He said, “I’m really trying to figure out how we address this idea that we want to inspire people to live this car-free life, and how do we really enforce that?”

He noted that this is the first time something like this is moving forward, but was concerned about merely taking a leap of faith.  “How are we going to address the fact that there are a number of people that probably are going to bring cars?”

The applicant Reid Youmans said, “I can address that in the sense, that’s not who we’re going to market to.

“We’re not marketing to students who are coming from out of town,” Youmans explained.  “We’re marketing to people who want to work on campus or work downtown.  We will have a couple of parking places on the property that are unbundled with the rent, they are paying an extra money on top of the rent.”

He said, “There really is no on-street parking on Olive Drive.”

He said if people want to horn in on other location’s parking, that is the responsibility of the management to have cars towed for people who don’t live there.

He noted that in front of Lexington, the parking is filled “but it’s often filled by cars that are abandoned – I don’t know what you do about that.”

However, Youmans raised a key point at this point: “It will be in the lease, that you are not allowed to have a car.”

He added, “We want to have a new piece of direction that demonstrates… that we can provide in Davis housing that is uncoupled with parking and that brings people to the project that believe as we believe that this should be the way it is.”

He said, “We’re going to have this as a lease restriction.”

Josh Chapman also raised the possibility of having a formation of a parking district to address the broader issue of parking on Olive Drive as well.

“This would allow for us to have permits or require people to register where they live in order to park there,” Councilmember Chapman said.

Youmans indicated that they would welcome that.

“I appreciate the uniqueness of this project and I appreciate your willingness to take this density and put a project out there that’s different than anything that we’ve seen in this town before,” he said.

Chief Darren Pytel said they haven’t studied a parking district yet.  Most, he said, are a bit different because the neighborhood approaches the city and they work out how many permits per address.

“Certainly this is not impossible to do, it will take a little time to actually put together what it looks like,” he said.

Mike Webb added, “It would be very feasible to do so prior to occupancy of any project like this.”

He did say that such a creation would come back to council for formal action, but council seemed supportive of the parking district concept, as well as the concept of the project which they unanimously approved on Tuesday night.