Yolo County’s Commons Town Hall on Tuesday focused on mental health and how the DA’s Office has implemented providing mental health services as an alternative to prison.

Two women, Linda Write and Gladys Mitchell spoke about how they have been advocating for improvement in mental health services since their sons were diagnosed with a mental illness.

Wright’s son was diagnosed with a mental illness in 2003 and that’s when she said she got a “crash course,” on the barriers that exist for those suffering from mental illnesses.

“I got a crash course in the … how many inequities there are, how much misinformation there is in the mental illness community and just how profoundly brave someone who lives with a mental illness has to be,” Wright said.

Wright said it took her breath away when she saw her son in shackles at court.

“When he qualified for mental health court I was expecting the same experience so I prepared myself for the worst,” Wright said.

Wright said the contrast between the criminal courts and the mental health courts was remarkable.

“It was obvious this was a team effort,” Wright said. “I could see this was a place where people are recovering.”

Mitchell helped create the Commons Data Portal with the Yolo DA as a volunteer with the Multicultural Collaborative,

“When I became involved in the multicultural committee, I had no idea they would delve into the work of looking at data,” Mitchell said.

Chief Deputy District Attorney Jonathan Raven laid out how Yolo County’s mental health services have evolved to where they are now.

“Mental health Court started about seven years ago and this is collaborative,” Raven said. “When we started, we started small and looked at other programs from across the state.”

The initial pilot program had 15 members according to Raven. It shortly grew to 30.

Raven said it’s not whether the DA is or is not doing it, or not letting people in. 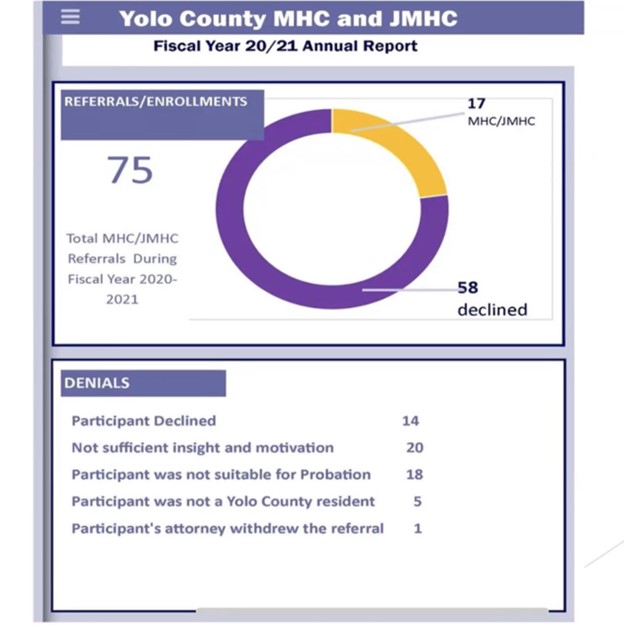 “What’s important to know is that the DA does not control what referrals get into mental health court,” Raven said.

In 2021, 75 referrals to mental health courts were made and 17 were admitted.

According to Raven, Probation and Health and Human Services provide the referred individual with an assessment.

Mental Health Diversion is a new program according to Raven which currently has about eight members but plans to be expanded to be able to serve 40 individuals at a time.

“The goal is a diversion. That program just started but the numbers are increasing,” Raven said.

Raven said that collectively, all the programs provide mental health support for “more than a few people.”

“It’s quite a huge population,” Raven said. “The only thing preventing us from getting more people in them is money.”

Raven said the DA, judges, or public defenders don’t have an impact on how many participants there are in the programs.