Seven ways in which the City and the Yes on Measure H campaign make DiSC 2022 appear economically far rosier than is likely.

The City and the Yes on Measure H campaign literature for the DiSC project emphasize that one of the important benefits to the City of Davis General Fund is a “$3.9 million net revenue gain for the City of Davis annually to address the city’s $7 million funding gap and maintain our quality of life without a tax increase.”

The net annual revenues projected to accrue to the City that have been presented to the voting public use the most optimistic “best case scenario” to make their pitch … but other less rosy scenarios exist.  During the December meeting of the Davis Finance and Budget Commission (FBC), Commissioner Jacobs suggested multiple times that it would be helpful to City Council if the consultant were to run the analysis using a worst-case and best-case scenario.  Unfortunately, that suggestion was not implemented by the

Scenario analyses are particularly valuable here in Davis because, for a variety of reasons, past development projects in the City have rarely yielded the revenues the City expected to them to produce. The $3.88 million surplus projected for this Measure H project may be the theoretical best case, but it does not recognize potential adverse impacts on this rosy projection. As shown below, if all of the seven impacts quantified in this document are considered, net annual revenues to the City could actually result in a deficit of $770,000.

Where can that $3.9 million projection be found?

The source is the December 2021 financial analysis prepared by Economic & Planning Systems, Inc. (EPS) the City’s financial consultant, that was presented to the FBC in December 2021 (see full report HERE)

Alternative Analyses Requested by the FBC

The FBC immediately saw three problems with the EPS financial analysis and, prior to its December meeting, asked EPS and City staff to prepare three additional analyses using alternative assumptions.  Those three analyses had the potential to significantly reduce the projected $3,880,000 (the “$3.9 million” in Yes on H literature) as follows:

The original EPS financial analysis assumed that the Total Costs of providing services (including fire and police protection and other social services) to the DiSC 2022 project on a per-person basis will only be 75% of what the City spends per-person currently. FBC analyses of the City’s true cost of providing services to projects like DiSC that add to the City’s population show the true Total Costs for City-provided services are greater than (not less than) the per-person existing costs of the City. Including costs at 100% reduces the projected net revenue by $470,000 … from $3,880,000 to $3,410,000.

In its original analysis EPS assumed a 50%/50% City/County property tax split. But FBC correctly pointed out that the County has not agreed to this percentage, and the County could deny annexation of the property by the City until a more favorable tax split is agreed upon. When EPS assumed a more conservative 40%/60% City/County split, the net revenue to the City is reduced by $150,000, which further reduces the $3,410,000 to $3,260,000.

It is worth noting that both the January Staff Report to the Planning Commission and the February Staff Report to City Council only report the $3.88 million figure (see Introduction and Background above), omitting these three alternative scenario analyses requested by the FBC.

Other Alternative Analyses Discussed/Performed by the FBC

There are several other scenarios that the FBC members discussed that would reduce net revenues to the City even further, but which were not formally documented by the City’s financial analyst.

4.   Accounting for Realistic City-Wide Hotel Occupancy Reduces Annual Net Revenues to the City by $934,000, which is the amount EPS estimated for DiSC

Local hotel operators have stated unequivocally that the only way a hotel at DiSC will achieve the 85% occupancy used in the EPS analysis is by cannibalizing existing hotel stay days from Davis’ current hotels.  The hotel operators were quick to point out that the Development Agreement stipulates that a current hotel demand study must be completed showing sufficient demand before any hotel can be built at DiSC.  Cannibalized hotel stay days do not generate any net additional revenue to the City but only shuffle existing revenue from one hotel to another hotel.  Addressing that concern reduces the net revenues by an additional $934,000 to $2,136,000.

The City’s $14.5 million annual budget shortfall was not included in the EPS analysis.  In addition to the benefit of all the good attributes of our fair city, DiSC needs to be responsible for its “fair share” portion of the problems Davis currently has with its crumbling streets, cracked bike paths, and poor building maintenance.  Adding DiSC’s proportional “fair share” of the $14.5 million Budget Shortfall increases project costs by $390,000 per year, which further reduces the $2,136,000 net revenues to $1,746,000.

6a.  Accounting for End-of-Useful Life Repair/Maintenance Reduces Annual Net Revenue by a minimum of $367,000/year

FBC members believe strongly that all projects should be responsible for the End of Useful Life Repair/ Replacement costs of the project’s roadways and infrastructure.  Using a 25-year useful life, which is extremely generous to the developer, the annual amortization of these costs is $367,000 per year, which further reduces the $1,746,000 to $1,379,000.

7.   Recognizing the City’s poor record of budget management argues for caution in accepting the City’s net revenue projections. An adjustment based on this history could be as much as $1,598,000

The following is a chart and supporting data table showing the expected reduction in net annual revenues to the City and the resultant final estimated financial gain/deficit to the City based on the above analyses. 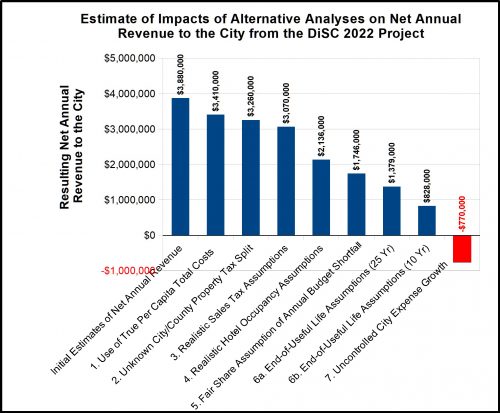 It is worth noting that the above analysis covers only a portion of the substantial impediments to achieving the theoretical best case.  The ones selected are those that have been quantitatively analyzed.  Over the past 24 months then-current members of the FBC have raised a number of additional questions that were not quantitatively analyzed, such as the following:

Closing Question for the Voters

Why was it so important to the City to suppress/hide the less-than-best-case scenarios that the FBC requested and EPS delivered?

Share:
Tags:DISC-2022
Previous : Letter: UC Davis Chancellor Gary May on Food Insecurity in Our Region
Next : Commentary: An Ob/Gyn View of Abortion

49 thoughts on “Guest Commentary: The Whole Story about DiSC’s Claim of $3.88 Million Net Revenue to the City”