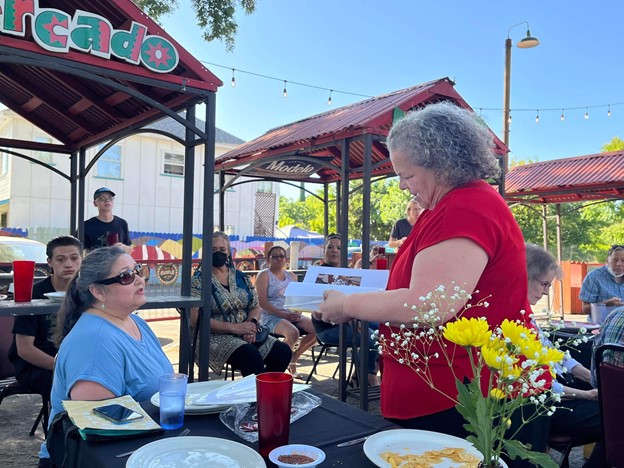 West Sacramento, CA – Cynthia Rodriguez, candidate for Yolo County District Attorney, spoke on Wednesday to a group of West Sacramento residents about how poverty compromises community safety and her vision of restorative justice.

—to speak, but only Rodriguez accepted the invite.

Rodriguez said good people fall victim to poverty and a system that doesn’t give people a break or a second chance often leads them to live in poverty.

“If we don’t recognize that by keeping people in poverty by failing to lift them we are subjecting them to continued violence,” Rodriguez said.

The issue of what happens to poor people is not something that can be resolved by saying “everybody has a chance,” according to Rodriguez.

“There is a section of our society that not only doesn’t know that but they don’t care,” Rodriguez said. ”In order to have safety, we have to give safety.”

Yolo DA Jeff Reisig and Rodriguez were at an endorsement interview with a local newspaper and were asked about their relationships with minority communities, according to Rodriguez.

“The whole problem with his answer was that nowhere in there was there anything about how he reached out to the community,” Rodriguez said.

She said that says something about how he will maintain relationships and address the issues of the overrepresentation of people who are Black, Latino, or Native American in jail.

“I have never heard a statement out of his mouth that poverty is violence,” Rodriguez said.

Rodriguez says the DA’s office needs to be ready to create a community, which is done by reaching out to those who haven’t had a genuine opportunity to be part of society.

She said oftentimes people who broke the law did not come from a safe home environment or didn’t have a safe school or were always living in poverty and were put in jail or prison early on, setting them up for a lifetime of poverty or imprisonment.

That means first-time offenders, misdemeanor offenders, and nonviolent offenders need to be given a second chance before they are given a criminal record, according to Rodriguez.

“Why are you going to put them in prison and turn them into prisoners? People who go to prison have a recidivism rate of two-thirds,” Rodriguez said.

Rodriguez said that is creating that many more victims.

“By treating people who make mistakes a better way we can create more safety for others,” Rodriguez said.

“Why does Yolo get a worse shake than the rest of the state? It’s about control,” Rodriguez said. “We don’t need someone who needs to control everything.”

She said Yolo needs a new DA so that the younger generations will know racial equality, and economic equality and not see a society where rich people can get away with breaking the law while poor people are put through the wringer.

“West Sacramento has suffered in the 16 years Reisig has been in charge,” Rodriguez said. “I’m here to assure you that when we win, we will be listening to what West Sacramento needs.”