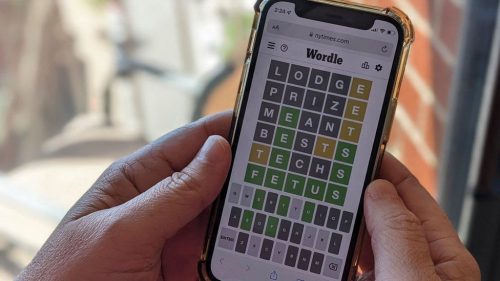 The first thing I do every day is go on Wordle. Wordle is a game invented by Josh Wardle where each player gets six tries to guess a five-letter word and its answers change daily. It was made and popularized during quarantine and has millions of players every day.

This Monday’s Wordle answer sparked a controversy. The word was “fetus,” and in light of the current political debate surrounding abortion, many people found “fetus” to be offensive. I think this controversy is rather ridiculous. Although “fetus” is relevant to recent Supreme Court news, the word itself is not objectionable or harmful.

The New York Times, which acquired the puzzle game in January 2022, apologized after this incident for inputting “an outdated answer that seems closely connected to a major recent news event.” They claim that all Wordle answers were uploaded last year, so the current news has no weight in the puzzle. In fact, the New York Times stated that they wanted “Wordle to remain distinct from the news.” They also removed many other potentially harmful terms such as “p*ssy,” “lynch,” etc. Because of the “fetus” answer, the New York Times received a lot of backlash on Monday, so the answer was changed as quickly as possible.

When I completed the Wordle for Monday around 8 am PST, the solution was— with a quick spoiler alert— “shine.” My friend, who also solves the puzzles daily, had “shine” for an answer too when he played at 1 am PST (or 4 am EST). Any player that refreshed their browser after Wordle made the switch would have received the altered solution.

Jason Rantz, a known conservative radio show host, complained about “fetus.” He incredulously stated: “We’re supposed to believe that the word ‘fetus’ being the answer to today’s Wordle is completely coincidental.” Amid the news of Supreme Court Justice Samuel Alito’s draft for overturning the ruling of Roe v. Wade which allows for a woman’s right towards having an abortion, many people are clearly on edge. Women are possibly losing their right to bodily autonomy by the end of June, and so to Rantz, the word “fetus” pushed the limits. Along with him, many people on Twitter were airing out their confusion and criticism of the supposed coincidence.

From dictionary.com, a fetus is “(used chiefly of viviparous mammals) the young of an animal in the womb or egg, especially in the later stages of development when the body structures are in the recognizable form of its kind, in humans after the end of the second month of gestation.” The most important part of this definition is that a fetus is a “stage… of development.” There is not anything wrong or abhorrent about a stage. Everyone was a fetus at one point!

One of the reasons the New York Times removed “fetus” as a solution was because it was “outdated.” However, as far as I could tell with research, there is no reasoning to support that the word is outdated. There is no other suitable synonym that is proven to be scientifically up-to-date. The synonyms on thesasaurus.com were words like “blastosphere,” “embryo,” “unborn child,” or “developing infant.” These terms were either not succinct, uncommonly used, or too vague.

If “fetus” is this controversial as a “stage of development,” what about “child” or “adult?” Those are both five-letter words that represent a stage of life that also relate to abortions. A child is what that fetus would grow up into, and the topic of abortion should be discussed between the two adults involved.

Wordle is a game that is supposed to be entertaining. The New York Times was not trying to be malicious and wanted to keep Wordle away from the news, especially political. Unlike the other words that the corporation eliminated from potential Wordle solutions, I do not think “fetus” is especially harmful. While the term “p*ssy” is considered derogatory and “lynch” has historical significance, the same cannot be said for “fetus.” The answer to the Wordle did not have to be changed. It’s simply a term used to indicate a stage of development and, although it is prevalent in the abortion conversation, it is not solely limited to that discussion. “Fetus” is just a five-letter word.

Share:
Previous : Commentary: Krasner Offers a Fiery Defense of Reform and Progressive Prosecution, Pushing Back against the Recall
Next : WandaVision Is Worth the Watch, All Strange Things Considered

One thought on “Student Opinion: “Fetus” Is Not a Bad Word”