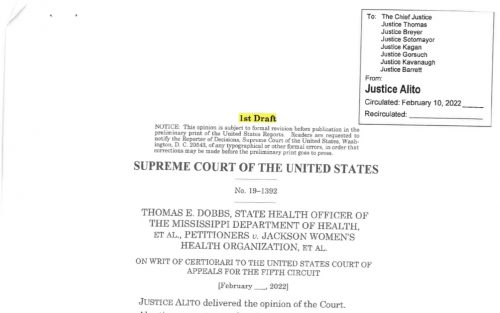 What brought fear in recent times regarding women’s healthcare seems to be coming true. In a leaked memo obtained by POLITICO, it was revealed that the Supreme Court is likely to overturn Roe v. Wade. The draft of the memo written by Justice Alito mentioned cases that have upheld the ruling, such as the 1973 case from which the clause gets its name, along with Planned Parenthood v. Casey in 1992. The 1992 case allowed for states to implement restrictions on abortion as long as there was no “undue burden.” Meaning that the limitations to such rights cannot be oppressive or too restrictive. These cases held their validity in the Supreme Court, abortion is a right. It is in the conservative majority of the court that these rulings have become a ”moral issue.” As Justice Alito argues, stating, “Roe was egregiously wrong from the start.” In the draft, Alito is speaking for the judicial majority that believe that abortion is not a healthcare necessity, but rather terminating a “life” that is not fully developed.

Reading the news on the draft infuriated me as the right to an abortion is a healthcare right, a person’s choice exercising their freedom. Without abortion access, Americans have a human rights issue. With this potential ruling, the majority of the court is siding with the values of their party and ideology; they are not siding with the people, such as the Black and Brown women that are being harmed by this decision; or the women who are to continue living in a cycle of poverty; or the reproductive clinics that are not able to effectively provide reproductive care to many people.

In a piece from NPR, Joe Hernandez writes on the potential outcomes of Roe V. Wade being overturned, which includes over 20 states setting laws that restrict or ban abortion. Restricted laws have been enacted recently by Texas, and if the court overturns Roe v. Wade, Mississippi will follow Texas’ lead.

Many red states will implement a restriction or ban on abortions following the conservative Supreme Court ruling—meaning women in those states will face great danger in procuring an abortion procedure. ABC News has reported on statistics gathered by the Associated Press on the now-regulated availability of abortion to minority women in conservative states. For instance, the Associated Press reported that in Texas people of color make up 59% of the population, and of that percentage, 74% receive abortions. If the ruling is struck down it will hurt women of color the most.

These women already face hardships accessing the basics of care. With these laws, they will not only suffer in accessing care for themselves, but for their children as well. They are being set up to stay in the working class, already working hard for themselves and having few resources. Women of color (WOC) will only be placed with more burdens that put their lives at risk. WOC for decades have had their reproductive rights regulated through procedures like forced sterilization; a ban on abortions is a modern version of this tragedy.

Cathy Torres, a manager with Frontera Fund, an organization in Texas that aids women in meeting abortion costs, states, “Abortion restrictions are racist…impact people of color…people trying to make ends meet.” In the same ABC News report, Laurie Bertram Roberts, an executive director of Yellowhammer Fund that provides financial support for women seeking abortions in Alabama, said, “WOC in states with restrictive abortion laws often have limited access to healthcare and a lack of choices for effective birth control.” Many organizations like these are helping women across America. They are assisting women in seeking the care that the government is attempting to strip them of.

It is despicable that the Supreme Court and the majority of its Justices are not considering the struggles that women face and especially women of color. There are thousands of arguments these Justices can make to support their decision and an infinite amount of rebuttals that we as the public can use to fight back. At the end of day, we pay the consequences of their rulings.

As a woman, living in a state where abortion is supported, I choose to listen to stories that come from fellow women who will lose their reproductive freedom. It is those women in red states, women of color, living in poverty that will be suffering from this nightmare, and their experiences will go unnoticed by SCOTUS, which will just tout their “moral high ground” to alter peoples’ rights.

Share:
Previous : Carson’s Legal Action Continues to Be a Focal Point for the Opposition of DiSC
Next : Jury Trial Includes 57 Counts of Child Molestation