For Reisig, a video by Bay Area Transparency (BAT), an independent media YouTube channel, has 55,000 views and over 5,000 likes.

After CBS 13 ran a segment about the campaign sign controversy, BAT went to the Yolo County District Attorney’s office to ask Reisig about the allegations of having sheriff’s deputies remove campaign signs that support his opponent, Cynthia Rodriguez.

He was directed to send questions in an email to Reisig’s campaign because the office cannot be used for campaign-related issues.

This reporter has sent several emails to the Reisig campaign and has yet to receive a response.

BAT’s video can be seen here.

Other posts on Facebook criticize Reisig for attacking ads against Rodriguez.

Other YouTube videos claim and accuse Reisig of hiding evidence and other unbecoming behavior of a DA. 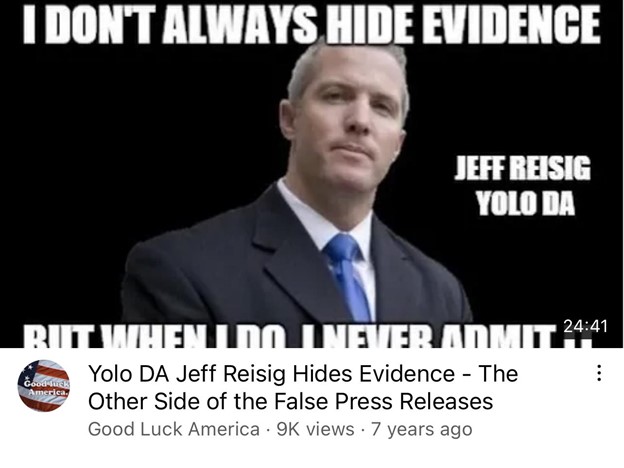 Many of these videos have been seen several thousand times.

The Santa Clara DA has a video circulating on YouTube and Instagram allegedly showing Rosen tripping one of his challengers, Daniel Chung, at a recent debate.

The video on YouTube has been viewed over 16,000 times.

“Does Jeff Rosen have any comment about the allegations from his opponents,” Marquess said.

“I’ve been mostly off social media lately but I can’t sit silently on this incident. This is beyond unbelievable,” Haggag said. What you will see in this video clip is the incumbent multi-term Santa Clara District Attorney Jeff Rosen blatantly refusing to shake challenger Mr. Chung’s hand after a debate and then willfully tripping Mr. Chung.”

Jeff Rosen unnaturally sticks his foot out. An accident would at the very least elicit remorse and an immediate apology according to Haggag.

“And this guy had been our District Attorney? Who’s going to hold him accountable for this willful assault?” Haggag said.

Other posts on Facebook from last July tell of Rosen denying someone the use of the prosecutor-initiated resentencing program.

“I tried to use this program, for someone who is only doing enhancement time, and had low numbers, to be denied,” Shay Franco-Clause, advocate said.

“So I’m so sad because of my personal experience through this process and when contacted by this organization, crickets,” Franco-Clause said.

Last February Rosen tweeted his support for the resentencing program, claiming he believes in second chances.

Thank you @ForThePeople_CA I am proud to be part of the ongoing effort to provide second chances! https://t.co/93nv8rvY9r

Other attempts by Rosen and Reisig to use social media have not been successful.

Reisig’s campaign has a few recent posts at a memorial for fallen police officers at the Capitol building on May 2 and another at the Woodland Youth Day Parade.

Whether or not social media will have an impact on the outcome of the election will soon be seen as ballots have already been mailed out for the June 7 primary election.