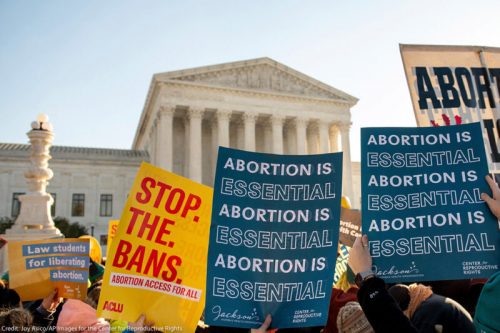 In this lawsuit they are asserting that the Kentucky Constitution protects the right to privacy and bodily autonomy.

The filing comes three days after the Supreme Court decision that overturned Roe v. Wade, ending the federal constitutional right to abortion. After this decision abortions have been banned in Kentucky due to a trigger law.

The ACLU said this trigger law has an exception for abortions in which it saves the mother’s life, though there is no exception for rape and incest—the law, argued the ACLU, is forcing women to carry the pregnancy against their will or having to leave the state to get the care that they need.

Amber Duke, ACLU of Kentucky interim executive director, maintained, “As we navigate a future in which the government can force Kentuckians to remain pregnant against their will, we’ll be doubling down in our work to end maternal mortality, secure paid leave, and expand access to childcare.”

The lawsuit argues the ban against abortion for women and those who can become pregnant will disproportionately harm people of color, those who are struggling to make ends meet, young people, rural residents, immigrants, people with disabilities, and LGBTQ+ communities.

The ACLU added, with this ban in place Black women and people of color will see the most harm due to Black women being two times more likely than white women to die during childbirth or shortly after. They noted if abortion continues to be banned across the country there is estimated to be an increase in pregnancy-related deaths. This is estimated to increase to 21 percent nationwide and 33 percent among Black women.

Rebecca Gibron, president and CEO of Planned Parenthood Great Northwest, Hawai’i, Alaska, Indiana, Kentucky said, “Planned Parenthood will continue, as we always have, to stand for our patients and providers. Now more than ever.”