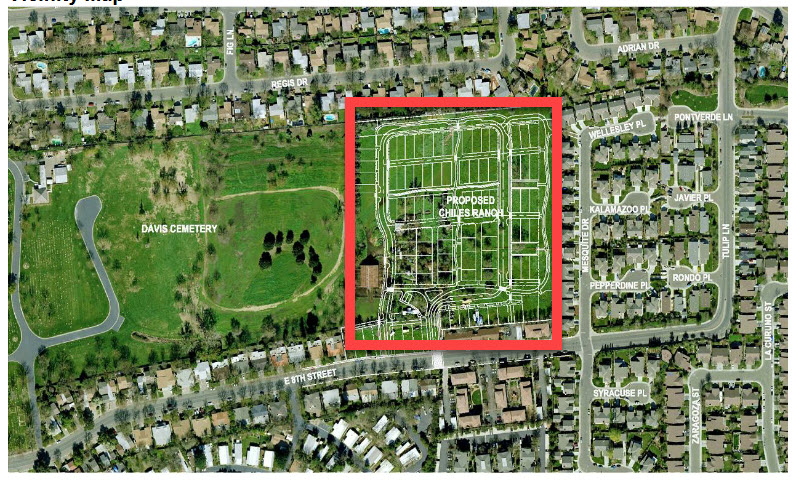 Davis, CA – The Chiles Ranch project was first approved on a bitterly contested 3-2 vote back in 2009 over strong objections from the neighbors.  The council has twice now been asked to extend the development agreement and approvals.

When the Planning Commission heard the proposed project, the commission was unanimous in opposing the staff recommendations and recommended the city not grant additional time to the developer without several provisions of the DA being updated.

These include: Limitations to the ADU be removed and the project updated to conform to current state law, a cost-of-living increase applied to the affordable housing in-lieu fees, the use of the HUD definition of first-time homebuyers used in the DA, the fee for traffic calming be increased to a current amount, and provisions that all newly-installed landscaping is properly maintained after occupancy of the homes.

Staff notes that, in 2009 and 2017, the city had full discretion over the number of ADUs, and “during the approval process in 2009, the City Council decided it was appropriate to limit the number of ADUs in the subdivision to ten. Since that time, the State of California has changed the laws under which cities must operate with regard to ADUs. The City no longer has the authority to limit where and when ADUs can be built, provided the property owner can meet the provisions of the law.”

Staff, however, does not agree with the COLA increase.

Secondly, “staff believes that the cost of living is not the appropriate adjustment to be added to a fee. Staff recommends the use of an inflationary factor instead. With the City adopted $75,000 fee as a starting place, the chart below applies an average inflationary factor of 1.67% arriving at $81,396 in 2022.”

On the first-time homebuyer definition, the staff notes that the city does not have a definition in its ordinances.

Staff writes, “City Council has previously directed that staff return with a City Municipal Code amendment to incorporate this definition – which staff intends to do with the Affordable Housing Ordinance update currently in progress. While the definition will be incorporated into City code, there is no harm in also incorporating it into the DA.”

Staff provides some language for a draft agreement.

On the traffic calming, “staff has determined that the applicant paid the requisite $15,000 fee in 2017 and that traffic calming devices have already been installed on 8th Street. Therefore, staff does not recommend any changes.”

In response to a tree and landscape maintenance program, “the applicant has offered a program wherein a fee is retained by the developer from each new homeowner.”

First, “an amendment to the Green House Gas (GHG) provisions to include a prohibition of natural gas in the subdivision. The result would be an all-electric subdivision which would meet the City’s Reach building codes.”

Second, “the inclusion of a 12 foot wide root barrier against the hardscape (parallel to the sidewalk) to protect the utilities and street improvements from tree root intrusion and lifting in the right of way.”

Staff notes, “The developer has agreed to install these barriers.”

The third recommended amendment “requires the developer to reseal 8th Street (from the western boundary of the project to Mesquite Drive) with a slurry seal after the connections to the utility mains are constructed.”

In 2009, the council backed the Chiles Ranch project on a 3-2 vote.  Sue Greenwald and Lamar Heystek opposed the project.  At the time, the development agreement was a ten-year term, but the project never got built and came back in 2017 before the council, with a reduced size from 108 units to 96 units and a requested reduction in the number of affordable units from 22 for-sale down to 14.

In 2017, critics questioned the desire to remove the condos and have questioned the city policy that allows developers to use in-lieu fees as a means to avoid on-site affordable housing.  The Planning Commission was split 3-3 on the issue of the proposed revisions.

But despite council approval now five years ago, the project still hasn’t been built.

Project Manager Lydia Della-Schlosser provided an explanation two weeks ago as to why the project had not been built.

She explained the delay: “Our original approvals were received in 2009, but at that time we paused due to the economic conditions of that period’s so-called Great Recession. In 2015, as the economy recovered from the economic cycle, we were fortunate to acquire the entitled land at Grande Village and the El Macero property.”

She said, “For many reasons, we chose to focus on Grande Village and the Villas at El Macero.”  They did bring Grande Village and the Villas to completion.  However, when they directed their focus back to Chiles Ranch in late 2019, “at that time, COVID came, and sort of threw us all back and because of the extensive uncertainty of how a worldwide pandemic would affect the overall economy and specifically the housing market, we made the business decision to not break ground on Chiles Ranch in 2020 … who would’ve predicted the housing market would take off as it did under these unprecedented times.”

She acknowledged, “In hindsight, we should have gone for it, but with so many unknowns, we chose to keep our risk low.”

If the council follows staff recommendations and approves the Second Amended Development Agreement, it would extend the expiration for two years until July 6, 2024.

Share:
Tags:ADUsAffordable HousingChiles RanchIn-lieu feesPlanning COmmission
Previous : My View: Some People Are Angry, but Anger Is Useless Unless the Energy Is Channeled
Next : Man Waives Right to Early Sentencing – Hopes to Get Married before Prison Sentence

27 thoughts on “Council to Weigh in on Chiles Ranch Project”