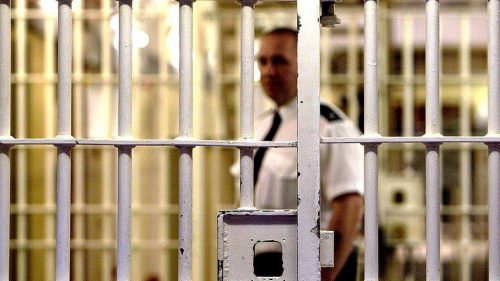 OAKLAND, CA – Jose “Nick” Cardenas’ family, community members and activists from the Ella Baker Center and the Anti-Terror Police Project, held a vigil for the late Cardenas last week outside the Alameda County Sheriff’s Office to protest the death of Cardenas, who died under suspicious circumstances while in police custody.

It was the 59th death linked to Santa Rita Jail in the past 10 years.

On May 17, Cardenas was arrested in Oakland allegedly for violating parole and taken to Santa Rita Jail. Just hours after his arrival, several deputies used force on Cardenas during an incident, tackling him and putting him in restraints such as the “figure four leg lock.”

The incident report, obtained by the Ella Baker Center, claims no injuries were detected. However, Cardenas was later found lying on the floor during a welfare check, his nose bleeding and his left hand almost entirely down his throat. Deputies reported that he seemed to be having a mental health crisis.

During the ambulance ride to the hospital, deputies said Cardenas coughed up a jail wristband, which the deputies placed in an evidence bag “to be discarded,” not saved. He was transferred to Stanford Health Care Center in Pleasanton, where he was pronounced deceased on June 7, three weeks after being taken into custody.

Deputies did not notify Cardenas’ family about his condition. A family friend had to extensively search before jail officials told them around May 25 that Cardenas was released from custody.

But the family later discovered that, at that point, Cardenas had already been in the hospital for nine days. The family also has not been informed about the details surrounding his death. They have not seen the autopsy report and body camera footage.

“My son is a victim of Santa Rita Jail,” said Cardenas’ mother, Lydia Piña. At the vigil, she mourned his death and asked for the entire country to know what happened to him in Santa Rita.

Jose Bernal, organizing director at the Ella Baker Center, also spoke at the vigil, emphasizing how “it is absolutely unacceptable that 59 in-custody deaths, that we know of, have taken place in that torture chamber known as Santa Rita Jail. What other county building do you know that has had 59 deaths within the last 10 years?”

Also in attendance was Elvira Monk, whose brother, Maurice Monk, died in Santa Rita last November. After his death, Monk reported that she had repeatedly tried to get her brother his much-needed medication for his schizophrenia, diabetes, and high blood pressure but with no success. The sheriff’s office presented his death as stemming from natural causes.

Maurice Monk was incarcerated in Santa Rita for not wearing a mask on the bus.

“We need justice. I don’t know what number my brother was, but this is three people who have died since November. My brother died on Nov. 15. Santa Rita has to stop,” Elvira Monk said at the vigil.

Bernal also expressed demand for an independent medical examiner’s office, stating “the sheriff has no business being the coroner. It is absurd and beyond ridiculous that the sheriff, for in-custody deaths, investigates themselves.

“We keep us safe. Not jails, not prisons, not more cops,” said Bernal, “We don’t need more sheriff’s deputies for the jail…that’s already been done time and time again. In 2020, the board of supervisors gave the sheriff $318 million to fund more jail deputies. Since then, we’ve had at least eight, 10 people die at Santa Rita Jail. We need to support the things that we actually need to keep us safe. The only way this will stop is if people stop going to Santa Rita Jail to begin with.”

So far, the sheriff’s office does not consider Cardenas’ death to be an in-custody death and therefore has made no attempts to investigate it.

His mother exclaimed, “I want you to put this on TV everywhere. I want the entire country to know this and I want everyone to see what happened. Cowards. Cowards. Licensed killers. He didn’t deserve this. I want them [deputies responsible for the death, presumably] to get 10, 20 to life for what they did and what they do to those who are incarcerated.”

Bernal added, “It is absolutely unacceptable that 59 in-custody deaths, that we know of, have taken place in that torture chamber known as Santa Rita Jail. What other county building do you know that has had 59 deaths within the last five years?

Another speaker with ADTP said, “We have the privilege to choose to be here today when this has been thrust upon the family. This is their fight now, which means this has to be our fight too, as if this is your own brother, sibling, loved one. That is the type of community that we need in times like this. This is when we need the most strength. It’s important that, when the family asks you to be somewhere, you be there.”

He added, “I heard the demands for justice, for whoever is responsible to be held accountable to the fullest extent of the law, and we know that that requires us to fight. Not a sprint, a marathon. We will be here for the entirety of that fight. What we are asking from our comrades is more support. I want the whole city, the whole county, the whole country to know.”

Bernal added, “It is absurd and insulting and a danger to our safety when our valuable tax dollars aren’t going into community mental health or the things that actually keep us safe. Instead, they are going to the jail, to lock up people who are Black, Brown, Indigenous, and low-income, and that’s the real danger.”