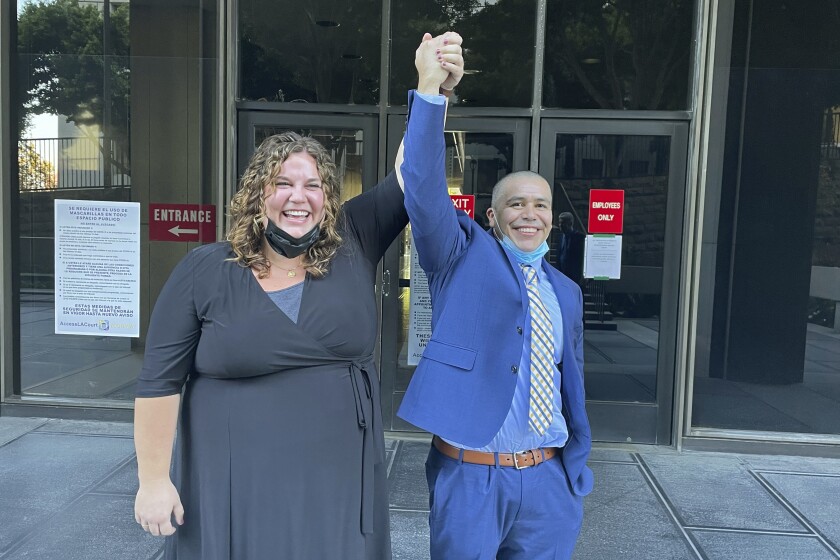 Los Angeles, CA – On Wednesday, the Los Angeles DA’s office along with the California Innocence Project announced the exoneration of Alexander Torres, who was wrongfully convicted of murder in 2001.

The exoneration was a joint effort between the DA’s office’s Conviction Integrity Unit and the Innocence Project.

Torres was convicted of murder in 2001 and sentenced to 40 years to life in state prison for a crime that he did not commit.  He was released from prison in October 19, 2021.

Torres was arrested and convicted of the murder of Martin Guitron in Los Angeles when Torres was 20 years old. Torres was tentatively identified by witnesses in the case.

In 2006, Torres’s family received a call from a friend with information about Guitron’s murder along with the names of the true perpetrators. The getaway driver eventually admitted to Torres’s family that he committed the crime with another man, and he knew Torres was not involved.

From prison, Torres wrote to the office’s Conviction Integrity Unit, which re-examined the evidence. District attorney investigators worked with sheriff’s detectives to conduct the investigation that ultimately led to Torres’ exoneration.

Audrey McGinn, the attorney with the California Innocence Project and primary attorney on the case, told the Vanguard that their office had just begun the investigation into his case, when the Conviction Integrity Unit approached them “and told us that they had corroborated the statement from the getaway driver saying that Alex Torres was not involved and that the getaway driver committed the crime with another person, not Mr. Torres.”

From there thy worked together on a joint Habeas Petition to the Court and then petitioned the court for a finding of factual innocence.  The court found that the new evidence raised in the petition “completely undermined the prosecution’s case and pointed unerringly to his innocence.”

One of the complicating factors in the original prosecution of the case was that when Martin Guitron, a member of the Compton Varrio Segundo gang, was shot and killed, he and Torres “had a prolonged well-known adversarial history.”

Torres’s home had been shot at as recently as one week prior to Guitron’s murder. Approximately two months prior to the shooting, Torres’s mother’s car had been vandalized in the driveway of their home.

When Torres confronted Guitron about the vandalism, this led to a physical fight between Torres and Guitron, which resulted in Torres fracturing his right hand.

For McGinn, this led police to suspect Torres.

“I think the motive element of the case to where he was in a fist fight with the victim two weeks before the murder placed Alex as one of the police’s main suspects because of their prior altercations that Mr. Torres admits,” McGinn explained.  “So I think the police had it in their head that it had to have been Mr. Torres, what we know that they overlooked now is that none of the witnesses mentioned Mr. Torres having a cast.”

He had his hand broken in the fight two weeks before and “he couldn’t even put his index finger and thumb together, much less be able to fire a gun.”

She added, “Additionally, the shooter repeatedly asked, according to the victim’s friend who was on his bicycle, riding bikes with Mr. Guitron, the shooter repeatedly asked the victim if he was Casper and that’s undisputed. And what the police should have realized is that it obviously was someone who wasn’t familiar with him, which is why he had to confirm it was him and Mr. Torres would not have had to do that because they had so many altercations before that.”

The problem here was not only eyewitness identification, but McGinn added, “I think the police had tunnel vision.”  Here she thought, the police looked “for facts that corroborate” their already existing theory of what happened instead of the other way around.

The Innocence Project didn’t start looking into this case until 2017—after he had been in prison for over 16 years.

“It was a long time before anybody was able to find the names of the actual perpetrators and a private investigator looked into him,” McGinn explained.

It was around the same time that Torres wrote a letter to the LA DA’s Conviction Integrity Unit.  Diana Teran of the DA’s office told the Vanguard, “We reached out to the California Innocence Project and found out that he had actually also written them.”

But both the DA’s office, who only had three attorneys working at the CIU, and the Innocence Project, are always extremely inundated with claims of innocence.

Teran told the Vanguard, “One thing that really struck the deputy in charge of the unit, is where he just basically said, please help me, I’m innocent.”

She said, “It was a really raw plea that I think really stood out to our deputy in charge.”

Once the LA DA’s office was comfortable “that he was wrongfully incarcerated, then we just moved very quickly with them to go before the court to get him out of custody.  And then we did a little bit more investigation prior to filing the joint factual innocence motion.”

In addition to the corroboration between the DA’s office and the Innocence Project, one thing that stood out in this case was that two sheriff’s department investigators were also very receptive and helpful in the investigation.

Teran explained, “Ultimately they concurred with our assessment (as to Torres’ innocence).  So ultimately nobody really disputed the fact that this guy was innocent.”

That makes a big difference.  McGinn noted, “We’ve litigated cases for 15 years when it’s a hundred percent adversarial and the Alex Torres case is the case that we’ve worked on probably the shortest amount of time, because, if the DA agrees, then there’s so many fewer loopholes that we have to jump through to be able to get somebody out.”

Teran noted, as McGinn had, the original bad blood between the victim and Torres.

“We’ve learned a lot about eyewitness identification—and the other thing that goes wrong with these cases is that usually the alibi witnesses are the family,” Teran explained.  “There’s a concern that the family’s not being credible.”

In this case, however, she did not see any evidence of wrongdoing on the part of the police or prosecutors.

“I don’t think it was the type of situation where I don’t believe there was any sort of police or prosecutorial misconduct in this case,” she explained.

“I am thrilled Alex Torres is finally free,” said Justin Brooks, Director of the California Innocence Project and a Professor of Law at California Western School of Law. “This case was ultimately resolved the way all wrongful convictions should be with the District Attorney’s Office working with us to discover the truth. I am very grateful to George Gascón and his Conviction Integrity Unit.”

“While it is this office’s job to hold people accountable for the harm they cause, it is equally important that we critically re-examine past convictions,” District Attorney Gascón said. “We must be willing to own up to past errors, determine what went wrong and make sure we do not repeat those mistakes.”

District Attorney Gascón apologized to Alexander Torres for his wrongful conviction and praised the work of his expanded Conviction Integrity Unit, saying that its prosecutors and investigators who help bring added transparency to the criminal legal process.

“Torres was so young when he was convicted of a crime he did not commit. He deserves a chance to start to really live his life,” said McGinn in a statement.  “I’m so excited to see Alex reunited with his family and loved ones.”