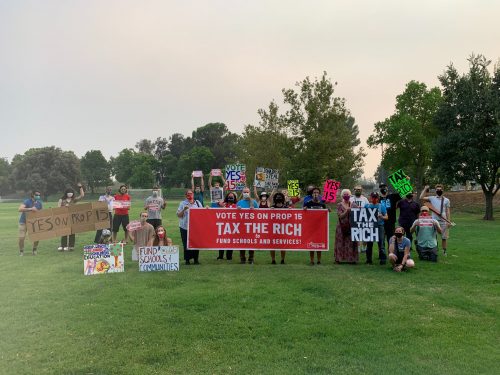 Davis, CA — On May 27, the Yolo Democratic Socialists of America hosted the “Building Community Power in and Beyond the June 7th Election,” in which three candidates running for different elected positions had a conversation about the power elected officials have.

Listed below are the three candidates who participated in the event.

Cynthia Rodriguez, an attorney who has been practicing for 40 years, is running for the Yolo County District Attorney and has a focus to reform criminal justice in Yolo County.

Julliette Beck is running for Yolo County Supervisor. She hopes to lead a just transition in Yolo County away from an unjust global economic system.

Meghann Adams, a San Francisco bus driver, is running for California State Treasurer. She hopes to tackle poverty in California. She is also a part of Left Unity Slate, a collaboration between the Green Party of California and the Peace and Freedom Party.

The questions asked of each candidate during the forum and their respective responses are as follows.

Q1: If you win, how do you believe your elected position will directly impact the issues we care about?

Rodriguez explained how the District Attorney’s office affects issues such as poverty, women’s rights, and racial justice head-on. “Racial justice is one of the main reasons I’m running,” she said, elaborating that “We have an unreasonably overrepresentation of [minorities] in custody.”

She also acknowledged how women’s rights have to be addressed, in particular due to the “recent supreme court leaks” indicating their intent to overturn the ruling in Roe v. Wade. Rodriguez stated, “We need a DA that is committed to—and I have committed to—never charging anyone who seeks, receives, or supports an abortion.”

Beck began her response with a land acknowledgement, stating, “We are here gathered on Wintun homeland. There are three federally recognized Patwin tribes and one un-federally [recognized] Patwin tribe who I have the most interaction with.”

In her answer to the question, Beck focused on climate change activism. She started by sharing her history of being active with the Youth Climate Movement and Intergenerational Climate Movement. She emphasized that “our climate system is our livable biosphere that’s destabilized now.”

Beck has created the Yolo County Climate Action Commission that she hopes to continue if elected.

She also addressed how her campaign impacts women’s rights, explaining, “I realized that I had to run for the board of supervisors because we have an all-male board.”

Adams also brought up the need for housing security during California’s fire seasons. “There are people that still have no homes because they burned down over the last five years because of all of these fires in California.”

She explained how her slogan, “end poverty in California,” ties into each of these issues and would be pertinent to the role of state treasurer.

Q2: How do you feel the patriarchal and capitalist status quo has impacted your campaign?

Rodriguez began by stating that there has never been a female District Attorney in Yolo County, nor has there been a Latinx District Attorney. She shared her experience of being faced with signs that had statements such as, “the DA has to be a man” during her campaign.

“We need representation,” she stated.

Beck followed with a similar story. “There have been no women elected to the Board of Supervisors since 2006. When people hear that, they’re pretty horrified.”

She continued that she is running against a “man who thinks he’s entitled to the position” of Yolo County Supervisor.

Beck stated that her strategy is to face “the patriarchal status quo head-on and try to turn it on its head.”

Adams’ response contrasted to the previous answers, as she explained,  “The incumbent for treasurer is a woman.” She instead focused on the impact of the capitalist status quo for her campaign in her answer.

Q3: What barriers do you anticipate if you win?

Rodriguez explained that she doesn’t believe there will be any community barriers if she wins the District Attorney position. She responded, “A lot of people have asked me if I’m worried about the police cooperating with me. I’ve worked with peace officers for years…I always have peace officers’ support.”

She continued, “I think there may be some rough patches with different people and different issues. But I believe that the main course of officers will be to get on board and do what we need to do to make things right.”

Adams expressed her belief that “the easiest barrier to anticipate is the fact that the system is not built for us to challenge it. It’s intended to keep the status quo.” She acknowledged that there will be many barriers trying to stop change.

Beck stated her concern that “the rules of engagement once you’re an elected official start to change. You are now part of the system, and there’s a culture in our county of deferring to staff and consultants rather than constituents.” She is interested in “major systemic change” in a “capitalist system that is crumbling” and anticipates many barriers in that regard as well.

Q4: If you win, how do you envision the community supporting your goals?

Rodriguez responded that she envisions an active community in the issue of how a District Attorney’s office is run. “I think there’s nothing more dangerous for a community than a disconnected DA’s office that sees itself with all the power.”

She expressed the desire to have open public forums and monthly city visits to engage in communication with the community, stating, “I think [we need] a lively and open conversation about what our goals are in this community.”

Adams plans to undertake a number of tasks from the local level to the state level and beyond, and involve the community at every step. One of these tasks she mentioned was “having our schools adequately funded” and involving teachers and school staff in the process.

She explained, “[it is important] there are resources that are supposed to go into supporting all of our children in the classroom. The teachers in the community know exactly what they need.”

Beck described her vision for the Yolo County Climate Action Commission, in which different people with ideas will be welcomed so that the community can work together to mobilize “and think about the long term change needed for future generations.”

Beck also plans to establish a youth commission to weigh in on Yolo County Board of Supervisors meetings and gain leadership roles.

Q5: If you don’t win, how do you intend to push for these goals outside of elected office?

Rodriguez replied, “Well, it goes without saying that I intend to win. But the answer to that question is to continue the drumbeat to ask our district attorney to be more transparent and give us more information about how he’s using that massive discretion that he’s already admitted to having.”

“I also intend to get involved very early in the next campaign. And if I decide not to run, then I will be working very hard for the next contender,” she added.

Adams touched on her years of being a community organizer and described her plans to continue “in that struggle, and organizing regardless of what happens in the election.”

She explained, “I’ve spent 15 years in the bay organizing [demonstrations for] anti-war, anti-police brutality, I was out there after the murder of George Floyd, I was out there defending Roe v. Wade.”

Adams continued, “This is something that I know I’ve committed to doing and I think is essential to continue building in the communities. That’s how we win. The strength of the people.”

Beck believes that her work is just beginning. She stated, “There’s a big difference between a finite game and an infinite game, and we’re playing an infinite game of infinite possibilities. And we decide when the game is over. For me, the election isn’t the end date of this work. It’s the beginning.”

“The platform has been based on climate leadership, inclusive economy building, and youth empowerment. Those are the pillars I will continue to uplift and organize around,” Beck concluded.

At the end of the forum, participants were given the opportunity to get involved with the campaigns. Community members were encouraged to stay and participate in a phone bank for Cynthia Rodriguez’s campaign or contact Meghann Adams or Juliette Beck to volunteer for either of their campaigns.

The election for these positions is a part of the Statewide District Primary Election and will be held on June 7, 2022.

Share:
Previous : Guest Commentary: Why I Support Measure H
Next : Judge, Prosecution Agree with Public Defender Who Demands Client Not be Held In Pretrial Custody for ‘Quarantine’ – Prelim Set