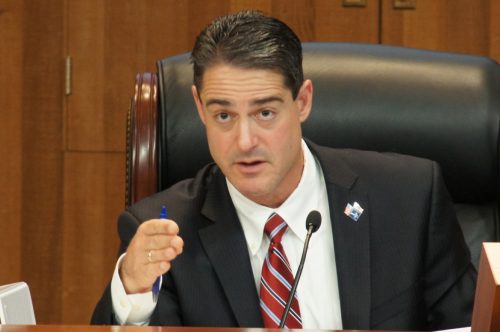 ANAHEIM, CA – Orange County District Attorney Todd Spitzer deleted a controversial tweet regarding the Uvalde school shooting Sunday, and it was followed by public backlash, according to his DA race challenger.

The original tweet depicted a Caucasian child victim of the shooting with the hashtag, #speakupforuvalde.

Uvalde and Robb Elementary are both majority Hispanic, with most of victims of the shooting also being non-white.

Three hours after the tweet was posted on DA Spitzer’s profile, it was deleted due to the public outcry and condemnation. Following this, Spitzer reposted the original tweet and replaced the white victim with three of the Latino victims of the shooting.

Former Marine Judge Advocate and Democratic candidate challenging Spitzer for Orange County DA Pete Hardin said, “After he carried the NRA’s water for 25 years, seeing him invoke photos of these victims makes me sick to my stomach.

“He’s asking people to speak up for Uvalde while he actively courts the gun lobby and spends his career voting against laws to get dangerous weapons off our streets. Mass shootings continue and gun violence in Orange County has reached levels not seen since the 1990s. This man knows no shame,” Hardin stated.

In a recent press release, Hardin went on to further attack Spitzer for his record on gun safety laws, highlighting his vote against a bill that “criminalized assault rifles” and a bill to prevent children from “accessing firearms and ammunition.”

The release also pointed out Spitzer’s “A+” rating from the NRA as a member of the organization, along with the public campaign donations that he received from the NRA.

This controversy is one of many that have plagued Spitzer’s tenure as DA, said Hardin, charging that in the past Spitzer has been criticized for racist remarks during discussion about seeking the death penalty for a Black man.

Hardin said Spitzer was also criticized for sexual harassment complaints filed by female employees of his office, as well as his attempts to drop sexual assault charges levied against “high-profile defendants,” causing the judge to remove him from a case.

Oliver is a fourth year student at the University of California, Davis pursuing a bachelors degree in political science. He is a transfer student from Porterville College and has associate degrees in both political science and social science. After graduation, Oliver plans to take a gap year before attending law school.