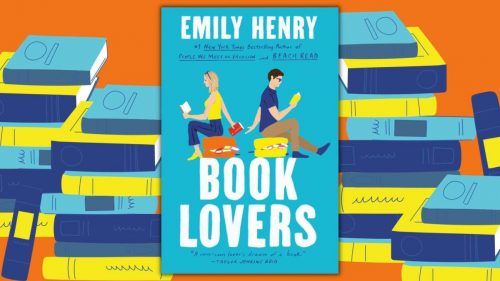 It is my displeasure to admit that I did not love the most recent and highly anticipated of Emily Henry’s three romance novels, Book Lovers.

Don’t get me wrong, it was still a great read and one I devoured in a sitting.

But I wasn’t hooked from the first few chapters, and wasn’t as enthralled even after as I usually am. It just wasn’t as wonderful as I anticipated, and I was disappointed.

This is likely due to the sheer amount of hype for this novel. As Emily Henry’s previous two popular books, Beach Read and People We Meet On Vacation, were total hits, fans’ expectations were even higher for her most recent work, released on May 3rd.

I’ve learned that I hold an unpopular opinion regarding this novel. Friends with whom I normally share similar book opinions found the novel to be their favorite of Henry’s yet. Goodreads reviewers share the same attitude, with reviews for Book Lovers higher than her previous two contemporary romances.

Book Lovers, while still featuring elements of romance, was focused more on themes ranging from family dynamics to career opportunities, and felt like more of a shift from Henry’s previous novels. But I couldn’t relate to the sister dynamics, or the New York loyalties, that were so integral to the plot.

I was actually especially stoked for this novel, not for the premise but for the meta tropes. For starters, any book about books is a green flag for me. And any rom com that is all too aware that it is a rom com? Sold.

I was all for this meta take on some classic rom com tropes— from enemies to lovers to big city meets small town. I love rom coms, and thus, going into that, the openness with which this book addressed said themes was a pro, not a con. This aspect was not what turned me off from the novel. Instead, it was simply the delivery.

To break the fourth wall like Henry does in this novel is a nuanced move, and Book Lovers missed its mark for me. Instead of featuring cliches in an intentionally ironic way, it was as if the book had addressed it would be quite cheesy, and then still tried to make it work. As a result it was a little shallow, and a lot disappointing.

Also, to be frank, I didn’t love the characters. That said, we aren’t necessarily supposed to— which is where the book still managed to win me over.

Book Lovers’ protagonist Nora Stephens admits right off the bat that she is not the likable female character: “she is not that type of heroine… not the plucky one, not the laidback dream girl, and especially not the sweetheart.” Nora, instead a “cutthroat literary agent,” is no girl-next-door, but a tough as nails business woman who works hard for what she wants.

I didn’t really like Nora. She is curt, dismissive, and fairly intimidating. But Nora is unapologetically herself, and I admire that.

She’s a woman written for women. You know her, and even if you don’t love her, you respect her. Nora has some great lines, too. One of my personal favorites summed up what it’s like to be a woman: “That’s the thing about women. There’s no good way to be one. Wear your emotions on your sleeve and you’re hysterical. Keep them tucked away where your boyfriend doesn’t have to tend to them and you’re a heartless bitch.”

Henry wrote a real character in Nora Stephens, without holding back. She does not shy away from a fight, nor is she embarrassed by her impractically high heels. She’s fiercely defensive and has a ten-step skincare routine. She has no desire for children and doesn’t feel the need to apologize for it. Instead of deciding to write a character who is strong or feminine, Henry chose to do both, without any contradiction. For that, I applaud her.

And from Nora’s sunflower metaphors to her (spoiler alert) secret editing dream, I even see myself in her character. She is nowhere near warm and fuzzy, but that’s okay.

Unfortunately, Book Lovers was not my cup of tea. Neither is Nora Stephens. But I’m okay with that. And I think she would be, too.

Even though this review aired out Book Lovers for both its plot and characters, I’m still a dedicated Emily Henry fan. After all, true fans can speak to both their favorites and least favorites of an author’s works. While Book Lovers isn’t at the top of my list, I’m glad to have made Nora’s acquaintance. She’s one hell of a woman.

Share:
Previous : Commentary: Was It Just Turnout that Resulted in the Blowout of Measure H?
Next : Judge Rejects Family Pleas, Issues Warrant and Sets $175,000 Bail for Accused