Woodland, CA – Yolo County District Attorney Jeff Reisig has stressed the importance of prosecuting cases in his bid for a fifth term as Yolo DA.

Only seventeen cases went to trial in thirteen months, according to the data on the Commons portal.

He has claimed that his office handles over 7,000 cases a year. According to the Commons Data portal, 6,290 cases were referred to the District Attorney’s office from September 2020 through September 2021, thirteen months.

In a recent forum, Reisig said, “There’s only one candidate that’s experienced as a prosecutor and that’s me. It’s one of the reasons why my colleagues, the elected DAs from San Diego to Santa Barbara, all the way to Modoc and Shasta, and almost everywhere in between through the California DA’s association have elected me the president of the statewide association. This is a group that represents people on all sides of the aisle, but they elected me president this year because they trust me. I have a record of innovation and performance that, um, you know, garnered their respect.”

All data in this report is from that same thirteen-month period.

Only seventeen cases went to trial out of the 3,775 prosecuted. About one and a half a month. 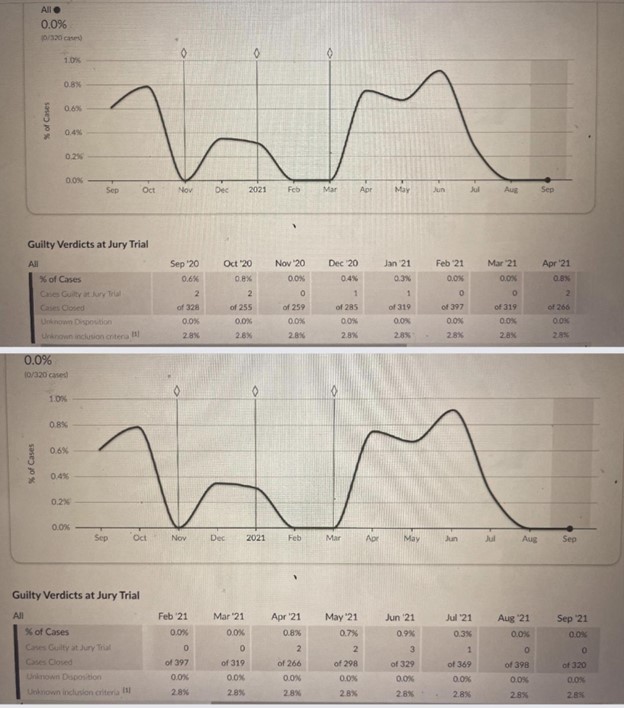 Throughout this campaign cycle, Reisig has criticized his challenger, Cynthia Rodriguez, for having a lack of prosecutorial experience.

“Not all lawyers are the same. You simply cannot be a competent, elected district attorney without the experience that I have. Unfortunately, my opponent does not have any experience as a criminal prosecutor. When I look at her record, I see no evidence that she has prosecuted a single case in her life as a criminal prosecutor. For that reason, there is only one person who’s qualified for this job,” Reisig said at the Woodland League of Women Voters DA forum.

Fourteen of the seventeen were found guilty by a jury for a win rate of 82 percent. The importance of prosecuting in court seems to be a bit oversold by Reisig, considering the Yolo DA has 28 full-time criminal attorneys. 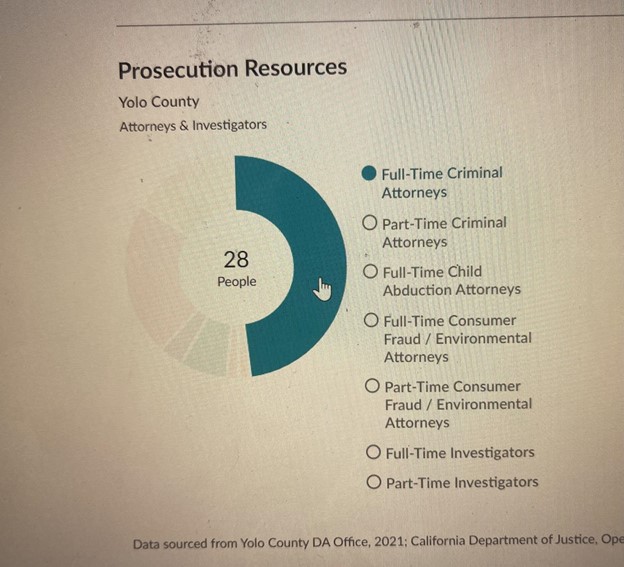 Nearly 40 percent of the 3775 cases prosecuted end up being dismissed by the DA, suggesting that law enforcement refers many cases to the DA without sufficient evidence. Another 35 percent of cases plead guilty to charges.

Most cases seem to end by forcing a plea or being dismissed.

About a third of all cases are violent, the majority of which do not involve a firearm.

Measures for Justice, the third-party tasked with keeping and uploading the data into the Commons portal, said that the data would be updated by the end of May—however, that has yet to happen.

5 thoughts on “Yolo DA Prosecutes 3,775 Cases but Only Took 17 to Trial in 13-Month Period According to Data”