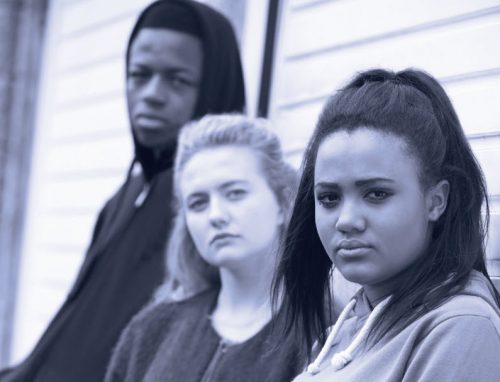 The overrepresentation of minority youth in the juvenile justice system is startling and demands an explanation.

According to the Office of Juvenile Justice and Delinquency Prevention’s (OJJDP) 2019 statistics, the number of youth in residential treatment programs has declined, but minority youth continue to make up the majority of the population (69 percent as listed in the report).

This disproportionate impact is most prevalent in the percentage of Black youth committed to residential treatment programs (42 percent).

According to the “Literature Review” based on the OJJDP’s report, “juveniles in residential placement were 42 percent Black; 31 percent white; 22 percent Hispanic; and five percent Native American, Asian, Pacific Islander, or other race/ethnicity (Sickmund et al., 2017).”

What’s most alarming is that the racial breakdown over the past two decades has only “slightly” changed even with reform attempts to lower the number of youth in the system.

The big question here is, why is there an overrepresentation of minority youth in residential treatment programs and at every level of the juvenile justice system?

To start, since the OJJDP data fails to give any explanation as to why minority youth are overrepresented at every level, taking a sociological perspective to unpack the data can be insightful.

However, doing so points to some ugly truths deeply embedded in our country’s history.

That is, minority youth are victims of criminalization and targeted policing.

Further, our broader criminal justice system, not only founded on racist principles, continues to function for the purpose of social control.

The institution targets individuals of lower socio-economic communities through policing and other forms of surveillance.

Thus, this phenomenon negatively impacts the youth residing in those communities as they, too, are victims of profiling.

Sampson and Raudenbush, in their 2004 article, “Seeing Disorder: Neighborhood Stigma and the Social Construction of ‘Broken Windows.’” found an implicit bias and stereotyping that “Americans hold persistent beliefs linking Black people and disadvantaged minority groups to many social images, including but not limited to crime, violence, disorder, welfare, and undesirability as neighbors.’”

Thus, minority youth are more likely to be profiled and stopped by police simply because of a socially constructed belief that race is connected to “criminal” qualities.

The 2019 case study “Get on the Ground!: Policing, Poverty, and Racial Inequality in Tulsa, Oklahoma,” found that “95 percent of these departments arrested Black people at higher rates than they arrested white people.”

Although this study focused in depth on the Tulsa community, it revealed policing across the U.S. follows similar patterns.

Specifically, the case study notes, “Disparities in incidents of deadly force, non-deadly force, arrests, stops, and citations exist across the country… other cities and states have imposed excessive court fees, fines and costs on their residents, the enforcement of which has contributed to abusive policing.”

Taking this into consideration, it is not surprising that minority youth make up the majority of the juvenile justice population because they are stopped by police at higher rates than white youth.

One might try to suggest that white youth just don’t commit as many crimes. However, statistics from the Bureau of Justice’s National Crime Victimization Survey (NCVS) conclude otherwise.

The NCVS goal is to see what kinds of crimes go unreported based on anonymous surveying of those who are 12 years or older across households in the United States.

Looking at “Race and Ethnicity of Violent Crime Offenders and Arrestees, 2018” the data revealed, “White offenders were underrepresented among persons arrested for nonfatal violent crimes (46 percent) relative to their representation among offenders identified by victims in the NCVS (52 percent).”

Now, compare that to data collected on Hispanic offenders for instance.

Meanwhile, much crime by “white offenders” goes unnoticed and unreported, pointing to clear inequities in our entire justice system.

Again, the statistics cannot be brushed off.

This negatively impacts minority youth and translates to their overrepresentation at every level in the juvenile justice system.