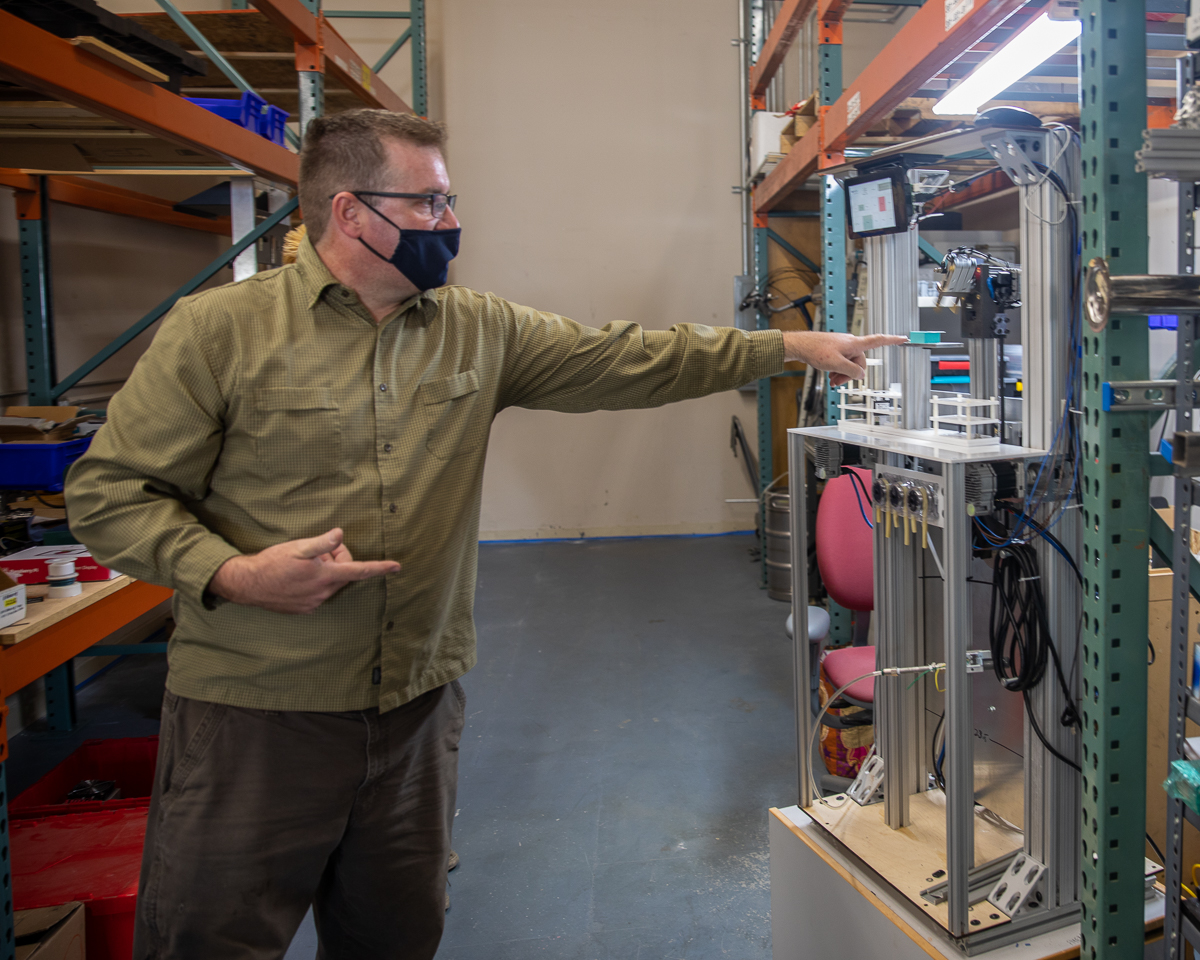 “The failure of Measure H can be a good thing”   …is strange sentiment to hear from someone who was a vocal supporter of measure H.   Yet in many ways it is true.

Entrepreneurs look at failures as opportunities: opportunities to learn, to grow, and to take some piece of feedback that wasn’t available before and incorporate it into your plans to do better the next time around.

In fact, early stage entrepreneurship as is practiced at Inventopia, is essentially “the art of failing fast and cheap” – trying things quickly and cheaply so that you can learn as quickly as possible which approaches work, and which don’t, so that you can concentrate your scarce resources on those efforts which have the most promise.

So failure should be seen as something to be treasured, to be learned from, and to be used as a guidepost towards eventual success.

As Henry Ford said:  “The only mistake is the one from which we learn nothing.”

I was a vocal supporter of measure H, and I remain convinced that focusing on our R&D commercial sector is our city’s absolute best strategy for civic financial sustainability.   And while I think the failure of measure H was a significant loss for our city, the failure itself can be a good thing, if we turn it into an opportunity to do it better in the future.

In that spirit, I’d like to weigh in with some of my own thoughts on this issue.   Because of the diversity  and scale of topics to discuss, I will be breaking up this commentary into three parts:

What have we learned?

There have already been those in the community who have claimed that the failure of H means that the “The Voters have spoken: We don’t want an innovation center.”    If this is true, then there is no point discussing any of this further.   These proposals have failed THREE times now – which is a piece of real data that only a fool would ignore.

But is that actually what the voters said?  I dont actually think so, and there are a number of reasons to believe so:

Take a look at the two following polls from Nextdoor, one was put up by Dale Smith, and the other had been put up by me a few weeks earlier. 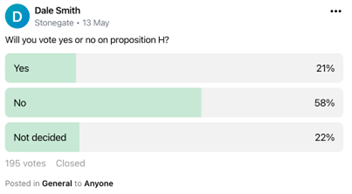 Now, I had suspected that the population on Nextdoor was not going to be representative of the larger population of Davis, and these are relatively small polls numerically… but Dale’s poll ended up being fairly prescient.

Contrast that to the poll that I had posted a few weeks earlier on a more general topic of growth attitudes in Davis.    In that poll, the percentages are basically swapped; with the people opposing growth only being 1/3 of the responses and the rest of the respondents being much more receptive to the growth of our town in general, and a significant fraction of responses specifically stating that they are in specifically favor of accommodating an R&D economy as part of that growth.

So if the people in this town are generally in favor of growth and are supportive of economic development, why did measure H fail so dramatically?  How is it possible that the same population that 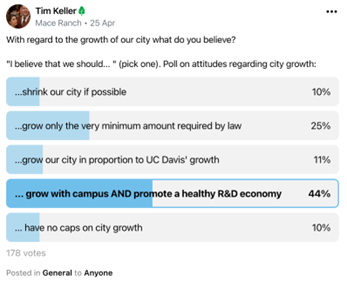 says it is specifically in favor of promoting a healthy R&D economy could turn around and vote-down a proposal to do exactly that, and by a large margin?

Obviously, there must be some other issues at play here.

As an active and vocal participant in the online debate around Measure H, It was indeed obvious that there were many “other” issues that were driving people’s opinions on the measure.  In fact, most of the objections did not focus on the need for an innovation park at all.  Instead, they tended to center around:

In addition, there were a lot of sentiments which are standard fare for anti-development groups, including:

In short, there were a LOT of reasons which people cited as their reason to reject measure H, but “ We don’t need an innovation center” was not generally not one of them.

In fact, the people who had the most direct criticisms of the innovation park concept tended to frame their objections in the form of the objection that “the developer hadn’t gotten “commitments” from potential tenants”, which suggests they were questioning the scale of the project.   Only 2-3 individuals that I can recall, vocalized the opinion that “R&D companies should just go to woodland or west sac” in a generic way.     A much more common response, was people suggesting infill as an alternative – which is a very different sentiment.

What does this mean?

I see no evidence to indicate that a significant amount of our population is against the idea of incorporating corporate sector development as part of our city’s long term economic development plan.  The evidence instead indicates that voters had a variety of other reasons to vote against this proposal – outside of its basic premise.

To re-state that in business terms:  The core product was not the problem:  It was the packaging, the promotion, and the execution by channel partners that failed.

Is there a better strategy in the first place?

With that said, we still can’t write off the fact that Davis voters have turned down an innovation park proposal three times.   The disconnect between stated preferences and actual voting behavior is still hard to reconcile.   So it is worth briefly questioning the fundamental premise of the proposal.  Is there some other concept that we should be pursuing instead of an innovation park that might be easier for the voters to accept?  Is there some better way to heal our structural financial deficits?  Should we be pursuing some other path rather than keep torturing ourselves with this one?

Unfortunatley, If you look at how cities are financed, there really aren’t that many options on the table.   Cities are generally financed by local sales taxes, property taxes, fees-for-service, and development fees.   Which means that our opportunities for increasing revenues amount to:

Now, which of these options do you think is the best fit for Davis?

Sitting on a winning lottery ticket

The answer, to the above question should be obvious.   Long-standing attitudes around development and the protection of our downtown, and the fact that we have recently turned down increases in the parcel tax, mean that development of our commercial sector is still likely to be the most popular option of those presented above.   But there is another, more compelling reason to favor a commercial / industrial development strategy in this town: competitive advantage.

I have pointed out in previous writings that many cities invest HEAVILY in economic development and in efforts to try to recruit new companies to move to their towns.   Sacramento for example, used to offer $100k forgivable loans to individual companies who were willing to relocate there.    Woodland has actively invested in programs like AgStart to attract life science and food-tech companies to their town from Davis.  Sacramento invested in Hackerlab, Elk Grove has invested in multiple programs… All of these efforts are an attempt to foster growth of their innovation / commercial sector by bringing new companies into their cities.   They want these kinds of new innovative companies because they are the most productive engines of economic growth in the country.  Unlike local service and retail businesses, they are the kinds of companies that bring money into the economy from the outside, that money then gets re-spent in the local economy and everybody wins.

But Davis is a very different animal.   By virtue of playing host to a massive research university, we are the kind of town where these kinds of valuable companies naturally form.    We don’t have to attract new companies to our city, they form here naturally.

We naturally generate an economic resource that other cities literally pay cash out of pocket to try to attract – and yet we do nothing to guard, protect, or conserve that resource.   Its like we have been sitting on a winning lottery ticket for decades, but have never summoned the will to cash it in.

So now we have established that a commercial / innovation economic development strategy is still the best fit opportunity to address the city’s financial needs, and we have shown that at least on a theoretical level the voters are in favor of such a strategy.

This begs the question: What is next?

It is tempting to give up on an issue like this after such a convincing defeat at the polls.   But that really would be a mistake.  The fundamentals of the strategy are sound, so innovation must remain a front-burner issue for the community, because our financial needs have not changed, and there are no better ideas on the table for how to address them.

I started this post with the sentiment that “failure can be a good thing, if it is a catalyst for learning, growth, and improvement.”   And I truly believe that.   So the most important task before us at this moment is to accomplish that learning and make the appropriate changes to our approach.    We need to learn from the failure of DiSC and incorporate those lessons so that whatever it is we try next, will NOT fail.

What exactly that means is something that I would like to start the conversation on in the second part of this commentary.

Tim Keller is a Davis resident and Founder and Executive Director of Inventopia.

8 thoughts on “Guest Commentary: What’s Next for Innovation in Davis? (Part 1 of 3)”