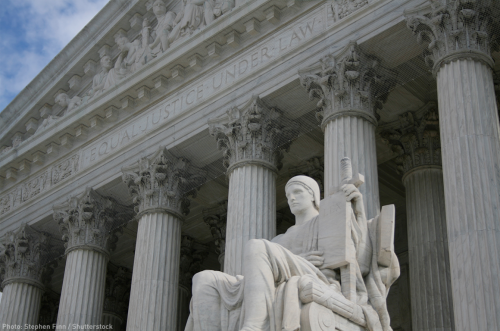 LWV argued the presence of guns in polling places would “intimidate” voters from casting their ballots and demonstrated in their brief how the threat of violence has been used to prevent political participation—“especially in communities of color.”

According to the Court opinion, SCOTUS ruled that “a very narrow group of places, including polling places, were “sensitive places,” where states could prohibit gun-carrying, consistent with the history of the Second Amendment.”

However, noted LWV, the Court failed to explain how state legislatures can expand the category of “sensitive places” in order to protect all places of “public congregation” that are not “isolated from law enforcement.”

Dr. Deborah Ann Turner, president of the LWV of the U.S., argued, “Today, the Court left the door open for states to keep guns out of polling places, but in doing so declined to guarantee protections for voters nationwide.”

Referring to gun violence, she said, “At a time when gun violence in public places has become far too common, today’s ruling further inhibits states from protecting residents from the threat of gun violence. With such ill-defined protections for polling places, the League of Women Voters is highly concerned about the effect on voters casting their ballots in the months ahead.”

Justice Breyer expressed, in his dissenting opinion, “The Court affirms…that States may forbid public carriage in ‘sensitive places.’ But what, in 21st-century New York City, may properly be considered a sensitive place? Presumably ‘legislative assemblies, polling places, and courthouses,’ which the Court tells us were among the ‘relatively few’ places ‘where weapons were altogether prohibited’ in the 18th and 19th centuries.”

Justice Breyer also noted, “On the other hand, the Court also tells us that ‘expanding the category of “sensitive places” simply to all places of the public congregation that are not isolated from law enforcement defines that[at] category…far too broadly.’ So where does that leave the many locations in a modern city with no obvious 18th- or 19th-century analog? What about subways, nightclubs, movie theaters, and sports stadiums? The Court does not say.”

Celina Stewart, chief counsel of the LWV of the U.S. also expressed her opinion on the ruling, stressing, “In today’s decision, the Court shies away from the issue at hand—a state’s ability to protect residents from gun violence—and focuses instead on details that undermine the very function of federal courts to evaluate the law.”

Stewart added, “With only the pleadings to consider, the Court employs a harmfully narrow view of the Constitution and eliminates part of a well-established test for evaluating a law in a modern society where gun violence in sacred places is running rampant. Instead of providing guidance to states and protecting the remaining structures of democracy, this opinion blesses the erosion of it.”

The LWV of Florida joined the brief, noting their efforts to allow counties to “place additional protective restrictions on voting locations” and “prevent voter intimidation.”

Cecile Scoon, president of the LWV of Florida, noted, “Floridians know the devastating effects of gun violence in public places, and today’s Supreme Court decision will threaten the safety of our communities,” adding “We condemn this decision that will likely make people fear going to places of the public congregation: concerts, community events, protests, and even polling places.”

According to the LWV, the SCOTUS decision undermines state and local government’s ability to “curb gun violence,” and urged federal leaders to act to codify which guns can be present in the public and craft laws that prohibit firearms in those sensitive places, like polling places.

LWV said, “Voters must be assured that when they cast their ballot, they can do so safely without the threat of gun violence. The League will continue fighting to preserve and support legal protections of polling places nationwide.”