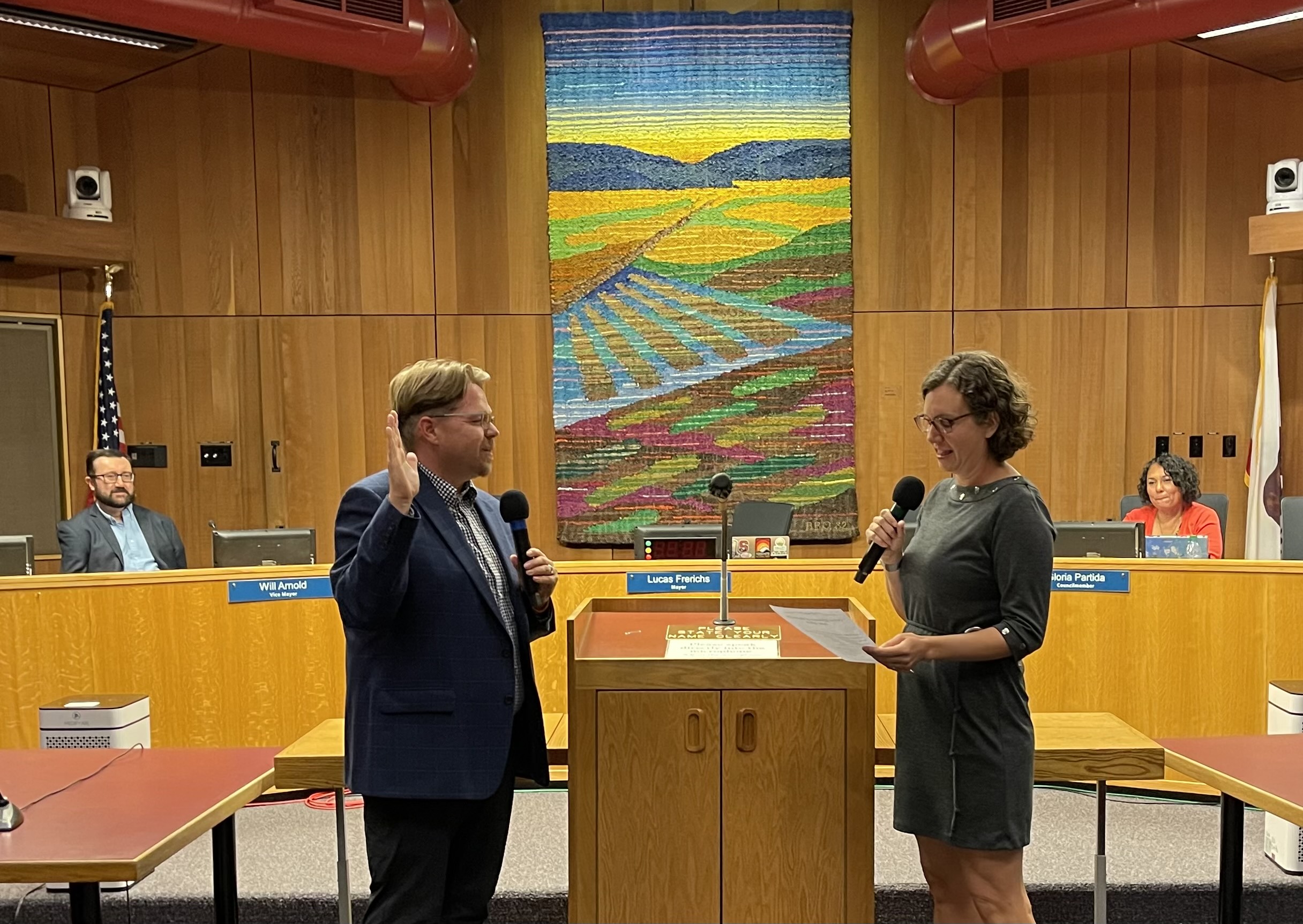 Davis, CA – The City of Davis announced today that Councilmember for District 3 Lucas Frerichs was sworn in as the 41st Mayor of the City of Davis during the July 5 City Council Meeting. Frerichs took the oath, administered by his wife, Stacie Frerichs, after the City Council voted to confirm him on June 28.

“I love our community, and after serving on the City Council for the last 10 years, I’m grateful for the opportunity to serve the City of Davis as mayor,” said Mayor Lucas Frerichs. “As mayor, I

promise to continue to actively listen, be responsive, keep our community’s best interests at heart and serve our city to the best of my abilities.”

Frerichs has served on the Davis City Council since 2012 and is currently serving his third term. Frerichs has a dedicated history in public service with more than 20 years of experience working for the California State Assembly and The Nature Conservancy and nearly a decade advocating for affordable housing throughout Davis and Yolo County.

Following the swearing-in of the mayor, Councilmember for District 2 Will Arnold was sworn in as vice mayor by his wife, Nichole Arnold. Arnold has served on the Davis City Council since 2016, and he is currently serving his second term.

“I’m honored to take on this role and continue the great work of my predecessors on behalf of our community,” said Vice Mayor Will Arnold. “Davis is such a wonderful, vibrant place, and I am excited to continue my work with Mayor Frerichs, our City Council colleagues, City staff and our amazing fellow community members.”

The City Council also honored Councilmember Gloria Partida for her tenure as mayor from 2020-2022 with a City proclamation. Each Councilmember shared a few words for her leadership and achievements, especially during the pandemic. Councilmember Partida also received a joint resolution from Assemblymember Cecilia Aguiar-Curry and Senator Bill Dodd and a commendation from Congressman John Garamendi.

“It has been my honor to have had the opportunity to serve as mayor for the last two years,” said Councilmember Partida. “It has been a privilege to listen and work through the challenging issues that have come forth during my tenure. I will continue to serve and respond to community needs until my council term concludes at the end of the year.”