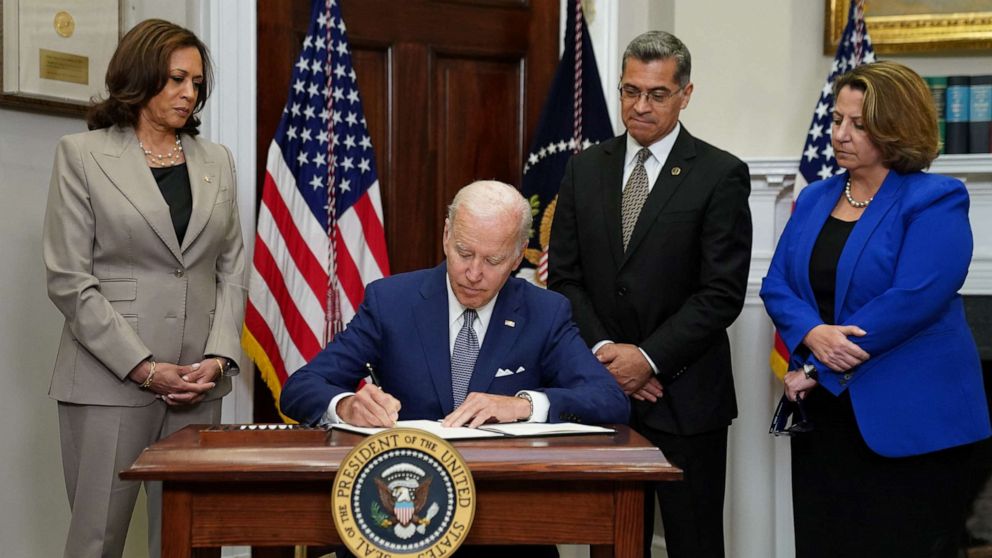 Washington, DC – Two weeks after the Supreme Court issued a decision that overturned Roe v. Wade and eliminated a woman’s Constitutional right to choose, President Biden, criticized and under pressure to do more, signed an executive order that protects access to reproductive health care decision.

The Supreme Court decision “expressly took away a right from the American people that it had recognized for nearly 50 years – a woman’s right to make her own reproductive health care decisions, free from government interference.”

The Executive Order builds on the actions his Administration has already taken to defend reproductive rights by:

During press comments on Friday, President Biden, quoting from the dissenting opinion, noted, “Neither law nor facts nor attitudes have provided any new reason to reach a different result than Roe and Casey did.

“All that has changed is this Court,” he quoted and then stated, “That wasn’t about the Constitution or the law.  It was about a deep, long-seething antipathy towards Roe and the broader right to privacy.”

He quoted again, “The majority has overruled Roe and Casey for one and only one reason: because it has always despised them, and now it has the votes to discard them.”

Biden said that “based on the reasoning of the Court, there is no constitutional right to choose.  Only the way—the only way to fulfill and restore that right for women in this country is by voting, by exercising the power at the ballot box.”

He added that “the truth is this—and it’s not just me saying it, it’s what the Court said: When you read the decision, the Court has made clear it will not protect the rights of women.  Period.”

She continued, “We will also pass legislation addressing the GOP’s disturbing threats to restrict Americans’ freedom to travel—reaffirming the Constitutional right to seek care freely and voluntarily throughout the country.”

Pelosi said, “We have a sacred, fundamental duty to expand freedom in America, not to roll back fundamental rights.  While Republicans seek to criminalize reproductive health care nationwide, House Democrats will never relent in our fight to defend freedom for women and for every American.”

In a Tweet, Senator Elizabeth Warren said that the President’s “executive order will help Americans receive the reproductive health care they need. I urged the Biden administration to expand access to medication abortion, protect patient privacy, and safeguard interstate travel for care.”

She added, “Today’s actions are important first steps. The Administration should continue to explore every available option to protect access to abortion care. The overwhelming majority of Americans oppose this extremist Supreme Court’s decision to overturn Roe v. Wade, and we must use every tool possible to address this emergency.”

Senator Alex Padilla added, “This is a necessary step toward protecting reproductive rights across the country. The fight is far from over—I’ll continue to work with the Biden administration to ensure people have access to safe abortion care nationwide.”

Governor Gavin Newsom thanked the President “for fighting to protect the right to choose.”

Minnesota Attorney General Keith Ellison added, “Despite what 6 people on the Supreme Court say, the vast majority of Americans want the freedom to control their own bodies and their most personal choices protected. This is what protecting Americans looks like.”

Mini Timmaraju, President, NARAL Pro-Choice America said, “All across the country, from governor’s mansions to state legislatures, pro-choice Democrats are stepping up to the plate to defend our fundamental freedom to make our own decisions about our families and futures while extremist MAGA Republicans prepare a federal abortion ban and anti-choice state officials are enforcing extreme bans on abortion state by state.”

She continued, “President Biden’s executive order to safeguard access to reproductive healthcare, including abortion care, is an important first step in restoring the rights taken from millions of Americans by the Supreme Court.

Jacqueline Ayers, Senior Vice President of Policy, Organizing and Campaigns, Planned Parenthood Federation of America said, “We’re in a national health care crisis and need officials at every level of government to do everything within their authority to fight for access to abortion. Amid the Supreme Court stripping Americans of their constitutional right to abortion after nearly 50 years, we need an urgent and robust response to ensure people get the essential health care they need.”

She added, “Planned Parenthood is encouraged the administration is reaffirming its commitment to abortion access and looks forward to working toward implementation of these and other strategies to address this crisis.”