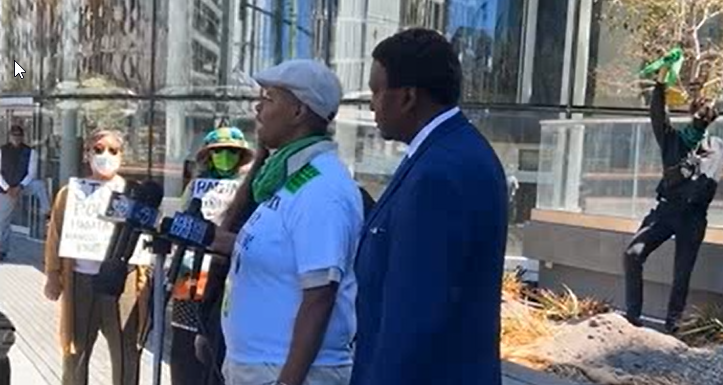 San Francisco, CA – Attorney John Burris held a press conference in San Francisco on Wednesday alleging that Kareim McKnight, while in the act of civil disobedience, protesting the Roe vs. Wade decision by the United States Supreme Court, was without her consent and or without the need for medical necessity, wrongfully injected with an unknown sedative by members of the San Francisco Fire and Police Department in violation of her state and federal civil rights.

Burris told the media there was no basis for this, “other than they didn’t like the fact that she continued to protest and they wanted to shut her up.”  He said, “That’s not a basis upon which you can inject a foreign substance in your person’s body without permission.”

Burris has been a civil rights attorney for decades and yet, “I’ve never had a case where a person was injected with a sedative of some kind without there being a significant

He noted that there are cases where the person has been under the influence of alcohol or drugs, and a form of narcotics have been given to them.  “But that was not the case here,” he said.  “So the question really is what is the criteria for giving a sedative to a person who was protesting and who was not dangerous to themself or to the officer, and who was merely protesting?”

According to Burris’ office, on June 13, 2022, Kareim McKnight and a friend Amanda Piasecki went to the Golden State Warriors’’ playoff game against the Boston Celtics at Chase Arena in San Francisco to protest the United State Supreme Court’s recent decision overturning the landmark case Roe vs. Wade.

They paid for their tickets and brought a banner to display when the time came. During the first quarter, they pulled out their banner, which had written in bold letters, “Overturn Roe? Hell No!” and as they walked down the stairs to the main floor chanted, “Abortion on Demand and without apology.  Without this basic right, women cannot be free. Rise up for abortion rights.”

As they reached the main floor, they were surrounded by security guards who asked them to leave.  McKnight and Piasecki continued to chant and immediately dropped to the floor. The security guards grabbed each woman by their hands and feet and physically dragged them out of the arena to the back room. While being dragged out, Mrs. McKnight continued to shout that they were protesting, which was an act of civil disobedience.

Once outside the area, Piasecki was immediately released, but not so for Ms. McKnight. She was held down with a knee in her back and an officer’s forearm across her neck, choking her, and she was handcuffed. She was threatened with being injected with a sedative by a San Francisco police officer, for which she protested.  She firmly refused any injections. She was placed on a gurney and strapped down.

Notwithstanding her protest and without her consent, she was injected with a sedative by a San Francisco fire department personnel.  She was transported to Kaiser Hospital and, shortly after that, was released.

Kareim McKnight said, “throughout this process, (Burris) has been forceful and adamant that injecting protestors with a sedative specifically me, was an outrageous violation of civil rights.

“This has been a very heavy time that we’ve lived under to see the Supreme Court of this country overrule 50 years of precedent to say that women are no more than incubators to enslave women, to say that basic control over women’s bodies is not theirs. And so that’s why on game five of the NBA finals, myself and my fellow resistor here, we came to the Chase Center because we knew the eyes of the world will be on this,” she said.

McKnight explained, “We knew we had to do something. We had to be part of a movement that said, no, we won’t stand by. And we, we marched down to the floor of the finals and we unfolded a banner that says, right there, rise up for abortion rights. And we sought to call on the beautiful, progressive liberal San Francisco warrior stance to take a stand, to get out of the stands, to get off the sidelines, to realize that we have to act.”

She described her being dragged out, choked, hog-tied.

McKnight explained, “Then a Sergeant from the SFPD came up to me and threatened to have me sedated. I want to say again, what Mr. Burris said is that we were engaging in nonviolent civil disobedience, which I said to them over and over, I was limp on the ground and I was threatened to be sedated.”

She described, “And then the SF fire department came. They strapped me to a gurney and they wheeled me to their van, to the emergency vehicle. And while I was on the ground handcuffed in front of the emergency vehicle, one of the firefighters came with a needle towards me and I couldn’t believe what I was seeing. And I flinched and I said, no, what if I’m allergic? You can’t just inject me. They didn’t ask me if I was allergic. If I had any preexisting conditions that there was no concern about what would happen to me afterwards, he injected a needle into my skin to sedate me.”

McKnight called this “a chilling attack on civil rights.”

Paisecki added, “I saw what was happening to them. I saw the racialized nature of what was going on here, and I feared for their life. And unfortunately I was right.”

Burris added, “Giving an injection to a protester against her will is shocking and illegal. In my entire career, I have never heard of a sedative being given to anyone, especially a fully restrained protester who was not a danger to themselves or others.”

Burris continued, “There was no evidence that Ms. McKnight was a danger to herself or anyone else. She was not under the influence of alcohol or drugs, and she was protesting and making herself heard. That in and of itself cannot justify injecting a foreign substance into a person without proof of a medical or safety need, which was not the case for Ms. McKnight.”

Burris added, “The worst part of giving her the injection was that she was strapped to a gurney, handcuffed, and therefore was not a danger to herself or anyone else. She was stating that she was protesting the Supreme Court decision.”

Burris said he believes the sedative was mean-spirited and designed to “shut her up.”

McKnight explained that the sedative made her sluggish and caused the slurring of her words.

McKnight said she believes that the police officers’ and para-medics treatment of her was arbitrary. She questioned the officers/personnel as to whether they were only giving sedatives to Black people. When asked why they gave her injections, they said it was for their safety which McKnight believes was ridiculous and a cover for punishing me for protesting at a critical playoff game.

Burris lamented, “What are the SFPD & SFFD criteria for injecting with a sedative against their will absent a profound showing of an impending medical condition or preventing harm to others?”